One of the advantages of being London based is that it’s very easy to travel to mainland Europe.  I spent several years taking the earliest flight or train out of London to Europe to be in Paris, Amsterdam or Brussels for business meetings at 11am on a Monday morning, and at that point parts of Europe became more familiar than Birmingham to me.  Barcelona never featured, so of course it has been on my wish-list for a long time. 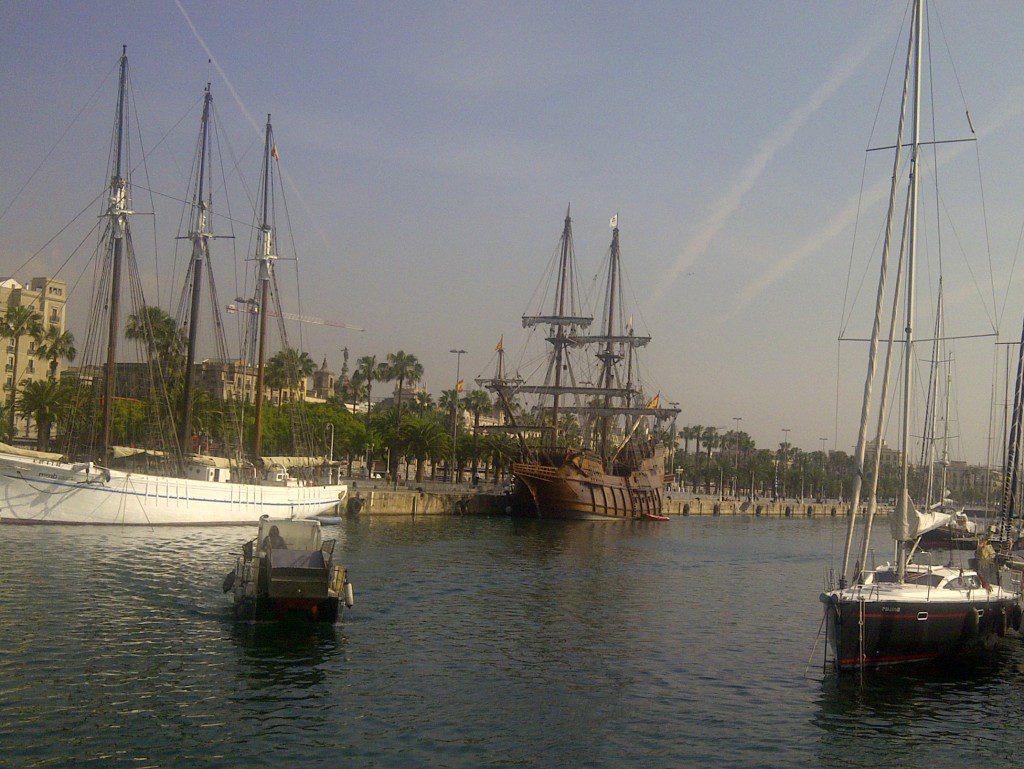 Flights to Barcelona take a couple of hours and there are departures from all the London Airports.  When you arrive at Barcelona there’s a really good public transport system, train or bus services to the city centre take between fifteen and thirty minutes, and once  there,  it’s easy and not expensive to buy a metro pass that gives unlimited travel within the city during your stay.  And, partly because the stations are relatively close together, even I managed to navigate myself around the place without getting lost. 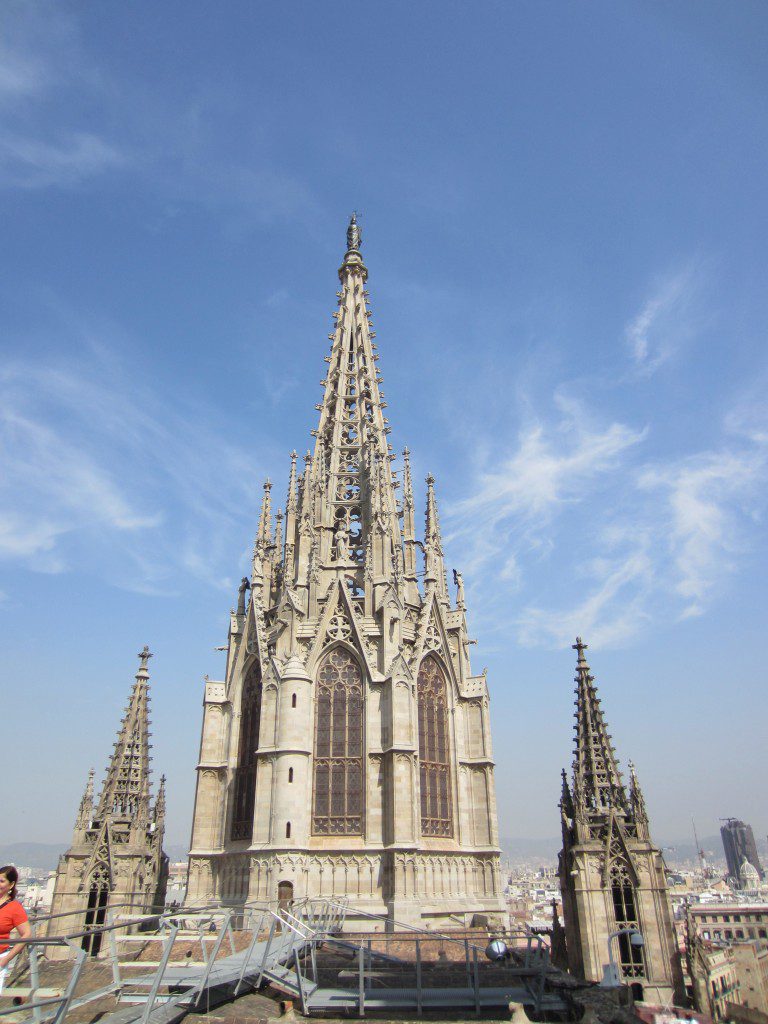 This was my first visit to Barcelona so I am sure I have missed a lot of things out.  But, my impression was that the city really does have something to offer almost everyone.  The old Cathedral is in the Barri Gotic.  Entrance is free and taking a lift to the rooftop, where you can see across the rooftops of Barcelona as well as some of the detailed stonework of the Cathedral is just 2.5 euros.  Walking into the cathedral cloisters there are palm trees and what appears at first to be a garden square.  As you turn the corner, you find a pond full of snow white geese which apparently first appeared centuries ago and have been resident ever since.  It’s still a working church, the confessionals were manned when I visited on a midweek morning and there was a service taking place in one of the side chapels.

By comparison Barcelona’s other ‘Cathedral’ the Sagrada Familia, started in 1882 is still being built.  Designed by Gaudi, this is a stunning building which manages to combine traditional and modern design.  And, for me at least there’s something fascinating in seeing a great building being constructed.

I spent quite a lot of time just wandering around La Boqueria, one of Barcelona’s best known food markets.

As a Londoner, when Borough Market first opened I used to wander over there to shop on Saturdays.  Over the last few years Borough has become increasingly commercialised and overpriced and now I rarely visit.  So, it was fabulous to find something close to a Spanish version of Borough as it was, without the inflated prices.  I also ate there, not at one of the bars but outside by the vegetable stalls – fabulous salt cod with white beans and a delicious tomato and goats cheese salad.

There’s a sandy beach and a marina, where you can wander around admiring the sail boats.  And, the column, with Christopher Columbus at the very top, looking out to sea.  Everything seemed very relaxed as I wandered back through the Barri Gotic 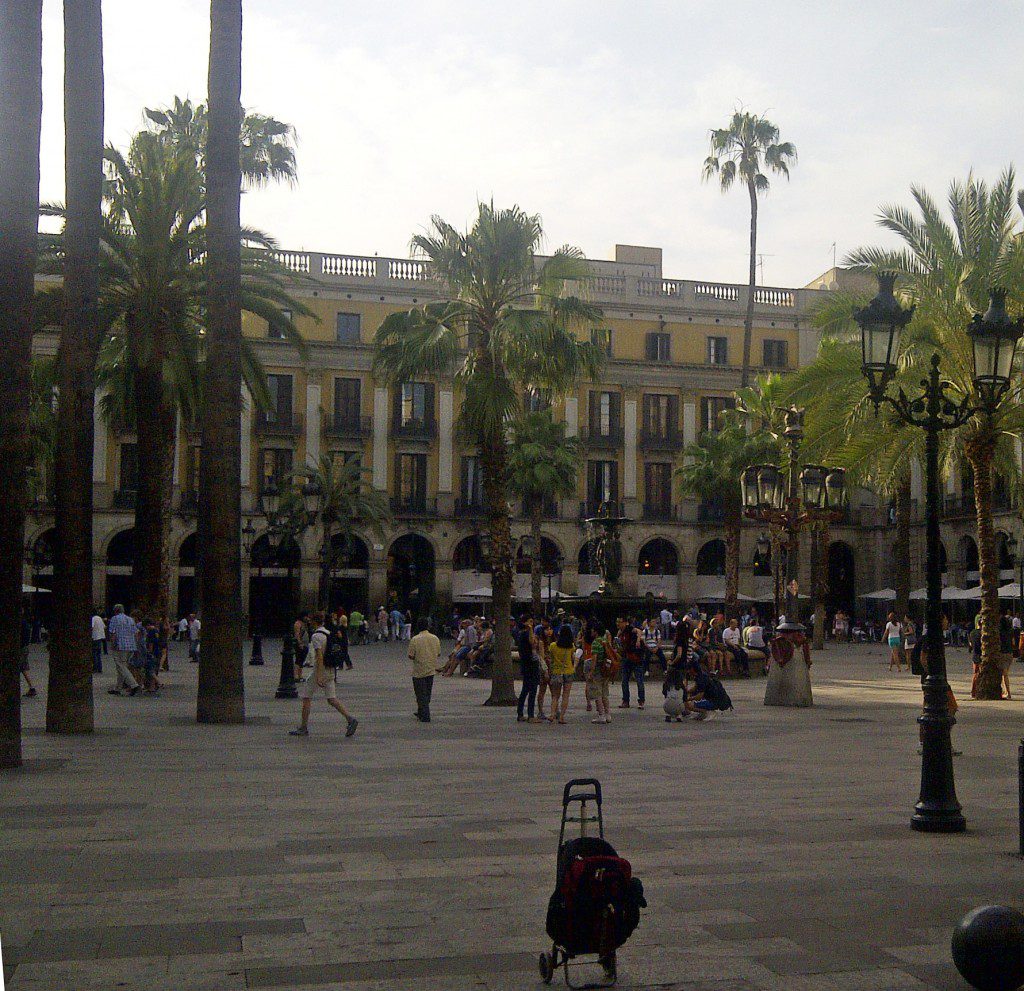 Perhaps my favourite place for sitting and chilling was Placa Reial, a charming square of bars and restaurants around a central statue and water fountain.  Part of the attraction for me was that the bars were relaxed enough to allow street entertainers, musicians and acrobats to perform for us while we drank and ate.  I spent one happy evening drinking wine and eating padron peppers and tomato rubbed bread at one of the informal bars, returning the next day to lunch at the recently opened gastro-hotel Hotel Do, where I had some fabulous modern tapas dishes

All in, I thoroughly enjoyed my city break to Barcelona and hope to return again.  There’s plenty to do and a really friendly atmosphere which embraces even the single traveller.  And, the weather is generally rather better than the UK!