My mother’s side of the family is from Somerset farming stock.  The youngest of thirteen children and the only boy, my Grandfather’s destiny should have been as a Quantocks hill farmer. He, however, had a fascination with electricity and left school to become an apprentice electrical engineer.  Mum used to tell me tales of milking the cows, making butter, pressing apples for cider and more.  But, I don’t remember any mention of making Cheddar Cheese, even though Somerset is also the home of Cheddar Gorge and the town of Cheddar from where this famous English cheese originates.  A wartime child, she would have lived through the period which may have helped feed a nation but which undoubtedly decimated the artisan cheese movement in the UK.  The British Government during the war decreed that only cheddar cheese made in their factories would be available to the general population.  “Government Cheddar” as it became known remained the only cheese available until 1954 – and while before the second war, in 1939, 514 farms in southwest England were making artisan cheddar, by 1974, only 33 farms remained. Luckily for us, there’s been a resurgence of interest in artisan cheese and for me, a trip to Cheddar Gorge to see the Cheddar Gorge Cheese Company and learn more about making the cheese was a great opportunity to learn a little more about a missing link in my own family heritage in addition to understanding how this unique English cheese is created.

John and Katherine Spencer who have owned and run the Cheddar Gorge Cheese Company for fifteen years, both come from a background in the dairy food industry.   Since they took over the business they have been developing, researching and experimenting with new processes while reviving and restoring some old traditions.  Their hand produced cheddar cheese is the only one produced in Cheddar and in December 2006 the Cheddar Gorge Cheese Company started maturing their cheese in Gough’s Cave, just as it would have historically been aged. 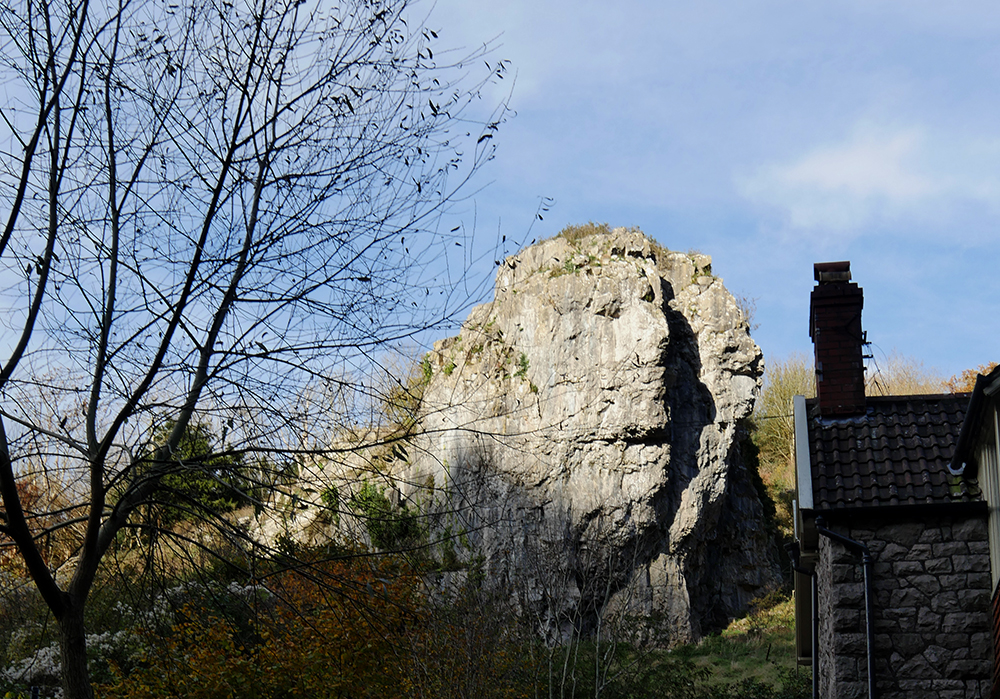 Cheddar Gorge contains a number of caves;  with a stable temperature and humidity these provide the perfect environment to allow the cheese to mature and certainly in the past, that is one way the caves would have been used.  Traditionally Cheddar cheese had to be made within 30 miles of Wells Cathedral – there are records showing that it has been made since at least the 12th Century while it’s believed that the original cheese recipe may have reached England from France with the Romans. Curiously though, Cheddar Cheese itself is made around the world.  While there is now a PDO for ‘West Country Farmhouse Cheddar’  which can only be produced in four counties ( Somerset, Dorset, Devon or Cornwall) and has to be produced on the farm itself, the Cheddar Gorge Cheese Company is the only cheese produced in Cheddar.   The milk for Cheddar Gorge Cheese also comes from close to Cheddar itself.  The cheese also properly vegetarian – from the rennet used through to the coating of the muslin in which the cheese is wrapped.  That used to be done with lard until someone realised it would compromise a vegetarian cheese – and sourced a vegetable fat alternative. Finally, as mentioned before,  some of their cheese is now aged in the caves of Cheddar Gorge itself giving it a unique provenance.  We went along to take a look.

The entrance to Gough’s Cave has on display a replica of Cheddar Man, Britain’s oldest complete human skeleton,  which dates to around 7,150 BC.  The original, found in 1903 now resides in the British Museum.  It’s a somewhat sinister entrance to the cave.  Just fifty yards or so further into the caves, there’s a wall lined with ageing Cheddar Gorge Cheese Company cheeses.

Here the humidity is just a little higher than in the Company’s own ageing facilities and the temperature is a constant temperature.  Perfect for leaving the cheese for as long as possible to make cave matured Cheddar (around 12 months, with the last 10 in the caves themselves).

The process of turning the raw milk used to make Cheddar Gorge Cheese into the final product is a traditional one but quite unlike any cheese-making process I’ve seen before.  Of course, it all starts with the milk which comes from one local farm and is delivered daily.  Once it arrives at the dairy, the milk is tested before being warmed gently in a large, traditional open vat.  Starter cultures are added and the milk is allowed to ripen.  Adding rennet creates curds and whey, the first time you see anything that resembles a cheese mixture. The Cheddar Gorge Cheese Company uses vegetarian rennet which means their cheese is all genuinely vegetarian.  At this stage, the mixture is cut, using a wireframe, to release the whey and help the cheddar coagulate.  The mixture is scalded and stirred before being drained of the whey which is collected and sent away to be used for animal feed.  The remaining curds immediately start to form into a rubbery mass and the curious process of cheddaring can begin.

Here’s where we all got involved with a bit of hands-on cheesemaking.  The pillows of cheese at this stage did feel something like a tempur pillow to me, dense and heavy, although also rather wet and slippery.  The Cheesemaker spends some time turning and stacking the blocks of curd while it drains further, carefully measuring the acidity of the mixture as it firms up.

Next, the pillows of curd are fed into a mill and salted, before being shovelled into cheese moulds.  The moulds are pressed in a special piece of equipment gently draining off yet more liquid before the cheeses are removed after a few days when the whole cheeses are dressed in traditional cotton/muslin cloth before being transferred to the maturing stores.  At this stage, they are still quite soft and we learnt that the Cheddar Gorge Cheese Company don’t cave mature for the first few months simply because the cheeses need to harden off a little before they are moved too far.

The Cheddar Gorge Cheese Company produce a range of different cheeses, from a youngish ‘mellow’ which is just 4-6 months old through to Vintage which is aged for 16 to 24 months.  Cave matured cheese is generally aged for no more than 12 months simply because there’s a point at which cheddar will develop a bitterness and, the slightly higher humidity and temperature of the caves means the cheeses here mature a little faster.

There are also a couple of special cheeses.  There’s a traditional oak-smoked cheddar which, unlike many smoked cheeses, is produced using traditional applewood chips rather than smoke liquid.  And, there’s a curious but really rather delicious natural blue cheese which happened by accident – and which, like many of the best accidents turned out to be worth producing – it’s quite sweet and very delicate.

My own favourite was indeed the Cave Matured which had a pronounced minerality and a creamy texture compared with the regular mature and vintage cheese from the Cheddar Gorge Cheese Company.I left with a bag full of artisan cheddar cheese to take back to London and with an insight into what makes cheddar cheese so unique.  The Cheddar Gorge Cheese Company offers a fascinating insight into the life of an artisan producer and a chance to learn how old and new techniques and equipment are balanced to make the perfect artisan product for today’s marketplace.

Thinking of visiting Somerset yourself? Why not pin this post for later

For more things to do in the West Country do consider a trip to Bath Abbey and the Roman Baths at Bath Spa, around half an hour’s drive from Cheddar.