‘Welcome to the Rock!’

Come From Away is a life-affirming tale; a true story of generosity, kindness and an indomitable human spirit.

On the morning of September 11th 2001, as a bewildered world tried to comprehend what was happening, air-traffic controllers in New York and Washington diverted 38 inbound passenger planes away from the terror, redirecting them to a small Canadian island at the north-easternmost tip of North America…

7,000 passengers from dozens of countries (and several dozen animals – including a pregnant bonobo chimpanzee) descended upon the inhabitants of Gander, Newfoundland, at once nearly doubling the population.

Now; Gander’s a small town full of humble, straight-talking folk, where everyone knows everyone’s name and business, with the occasional traffic jam caused by a moose crossing the road… so it was nothing short of life changing when so many unexpected visitors arrived in this quiet community.

Faced with an influx of frightened, tired, frustrated travellers, the townspeople did what comes naturally to good people everywhere. They rallied, overcoming all obstacles to provide shelter, food, clothing and compassion to the ‘Come From Aways’.

This ingenious musical – written by husband and wife team Irene Sankoff and David Hein, and based on interviews with real Newfoundlanders – arrived in London’s West End after its phenomenal success across North America and on Broadway, where it continues to win over its audiences and has recently extended its run.

Surprisingly honest and heartening, directed with flair by Christopher Ashley with musical staging from Kelly Devine, the production gives a wonderful insight into human kindness and courage in the face of an emergency.

An enormously talented cast plays both the Islanders and the ‘Come-From-Aways’, switching seamlessly between the two, with individual actors playing multiple roles in a dazzling series of transformations.

Ali (Jonathan Andrew Hume) is an unfortunate Muslim head chef, regarded with fearful suspicion by almost everyone, and Rachel Tucker gives a spirited performance as Beverly, the first woman airline pilot to become a Captain with American Airlines. Meanwhile, a touching love affair blossoms between terribly English Nick, (the excellent Robert Hands) and American divorcee Diane, played by Helen Hobson. In fact, the whole cast is wonderful, and there are many more outstanding performances – not least Clive Carter as Gander’s mayor, who leads his townsfolk with earthy humour and terrier-like tenacity.

The set, designed by Beowulf Boritt, is spare and simple. Decked in wood, with minimal props and subtle, mood evoking lighting by Howell Binkley, it provides a versatile backdrop to the narrative. Superb choreography is supported and propelled by a terrific band (led by musical director Alan Berry) whose Celtic-infused sounds conjure emotions tender and loving, joyful and riotous. The band is very much part of the show, often joining the actors on stage, making it feel like one big party.

Come From Away is woven through with themes of tolerance, trust and faith. Its message – that most people are intrinsically good – avoids sickly sentimentalism and moves the audience with authentic stories of friendship, love and loss, doubt, resilience, and reconciliation.

A diverse cast and energetic production give moving tribute to those who lost their lives on September 11th, 2001 – as well as 9000 Newfoundlanders and 7000 passengers who for three days surpassed themselves and together discovered their common humanity.

It feels like a timely reminder of the best we can be, as people, and how we might all get by – with a little help from our friends.

‘On the northeast tip of North America
On an island called Newfoundland
There’s an airport:
It used to be one of the biggest airports in the world
And next to it is a town, called Gander
Welcome to the rock if you come from away
You probably understand about a half of what we say
They say no man’s an island but an island makes a man
Especially when one comes from one like Newfoundland
Welcome to The Rock!’

Come From Away has extended its run until February 2020

Also showing in London at the moment is Rosmersholm by Ibsen.  Catch it while you can – the last performance is 20th July

Looking for somewhere to eat pre or post-theatre?  check our handy roundup of restaurants in the West End 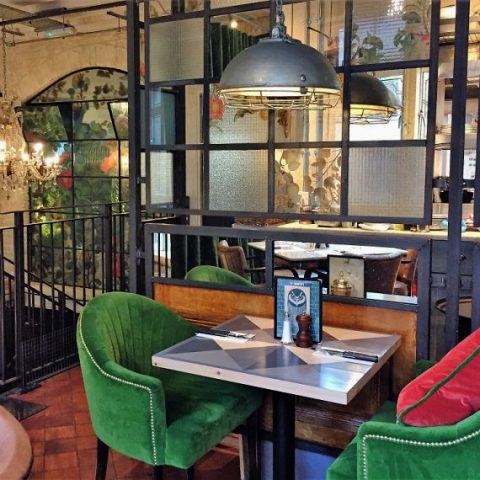 A chain, but one of the good ones - Bills offers a great all day dining menu at reasonable prices

For some of the best fish in London at cafe prices, try Randall and Aubin - don't miss the Zucchini fries either

Simple pasta and pizza served cafe style without too much fuss

Perfect pre-theatre dining at the newly opened Boulevard Theatre's own restaurant. Excellent dishes that can be enjoyed both by those visiting the Boulevard itself or any other West End Theatre.

Lucy comes from a background in the Theatre. She loves to soak up the wealth of live theatre and cultural activities London offers. She's passionate about photography and an enthusiastic and fervent traveller, keen to explore as much of the world as possible. A ‘bon vivant’, she's always up for a party and at her happiest with a glass of champagne in hand