Tweet
Pin
Share
Flip
Share
If you haven’t yet visited the Cutty Sark in Greenwich, this year is the time to make sure you do.  Built in the famous dockyards of the River Clyde in Scotland, the Cutty Sark is 150 years old in 2019.  One of the last tea clippers to be built, these beautiful tall ships fell out of favour with the onset of steamships.  But, The Cutty Sark was once the fastest tea clipper on the seas. Now, the world’s only surviving extreme clipper, you can go onboard and explore for yourself.  Much of the original construction still remains – and that’s despite recent fires in 2007 and 2014.   I went along last week to find out more.

How did the Cutty Sark get her name?

The name ‘Cutty Sark’ comes from the nickname of the witch Nannie Dee in Robert Burns’s 1791 poem Tam o’ Shanter.

The ship’s figurehead which you can just see in this photo is a carving of Nannie Dee with long black hair holding a grey horse’s tail in her hand. And that nickname is a reference to Nannie Dee’s short ‘sark’ (chemise) which she was meant to have been given as a child.

But Tam kend what was what fu’ brawlie:
There was ae winsome wench and waulie,
That night enlisted in the core,
Lang after ken’d on Carrick shore;
(For mony a beast to dead she shot,
And perish’d mony a bonie boat,
And shook baith meikle corn and bear,
And kept the country-side in fear.)
Her cutty-sark, o’ Paisley harn
That while a lassie she had worn,
In longitude tho’ sorely scanty,
It was her best, and she was vauntie,-
Ah! little ken’d thy reverend grannie,
That sark she coft for he wee Nannie,
Wi’ twa pund Scots, (’twas a’ her riches),
Wad ever grac’d a dance of witches!

Fredrick Hellyer of Blackwell carved Nannie Dee and other ‘scantily clad’ witches along the bow of the ship, but the first Captain, Willis, regarded these as being in bad taste and had them removed.

History of the Cutty Sark

Tea, at the time the Cutty Sark was built, was an expensive luxury. She was built in 1869 for John ‘Jock’ Willis, a second-generation shipping magnate.  In 1870, when the Cutty Sark first set sail, it was at a time when bringing the first tea of the new season over from China was a race.  Historically a premium had been paid for the first tea to shore, it was a national sporting event and the subject of much interest in the press.  But, the American ships generally won.  Willis commissioned a ship to challenge the best. Clipper ships have three design characteristics – a long, narrow hull, a sharp bow to cut through the waves and three masts. Built of wood and iron, the first Captain, George Moodie was impressed.

‘She was built for me.  I superintended the building and fitting of her, and I never sailed a finer ship.  At ten or twelve knots she did not disturb the water at all…She was the fastest chip of her day, a grand ship, a ship that will last forever’

The Cutty Sark left London 15th February 1870 – her first voyage – and returned from Shanghai eight months later with more than six hundred thousand kilos of Chinese tea. On the 15th of February 1870, Cutty Sark left London on her maiden voyage laden with wine, beer and spirits, bound for Shanghai and eight months later she returned with more than 600,000 kg of Chinese tea on board.  In the days when tea was so precious that it was kept under lock and key, the cargo was worth a small fortune.

In fact, the Cutty Sark only made eight round trips as a tea clipper, thanks to increasing competition from steamships, able to take a shorter route through the newly opened Suez Canal.  With the decline in tea transportation by sailing ship, the Cutty Sark was used to transport wool from Australia, again with speed as one of the main drivers.

Under a new Captain, she reached speeds of 17.5 knots – the fastest ship on the wool trade.  But that too ended up being served by steamships and eventually, the Cutty Sark was sold to the Portuguese firm of Joaquim Antunes Ferreira.  She continued carrying mixed cargoes until 1922.

Eventually, she was bought in 1922 by Wilfred Dowman, a retired Merchant Navy captain.  He must have seen the Cutty Sark much as a collector of rare vintage Ferraris these days.  She was used as a cadet training ship and for the first time opened to the public, with visitors rowed out to see her in Falmouth where she was moored.  When Wilfred died, the ship was given to the Incorporated Thames Nautical Training College and was towed to Greenhithe.

Finally, in 1953 she was given to the Cutty Sark Preservation Society and moved to a specially built dry dock in Greenwich.  A grade I listed monument, the Cutty Sark is open to the public.

What to see on the Cutty Sark:

Exploring the Cutty Sark is like taking a step back in time.  Pristine and gleaming, you can imagine how proud the Captain was of his amazingly fast sailing ship.  On the Main Deck, you’ll find everything the sailors would need for daily life.

There’s a galley for food, the Liverpool House where the Captain and other officers lived, albeit in cabins with what looks to me like beds for dwarves, accommodation for the crew and even heads… This ship really did have all mod cons!

You’ll find the perfectly restored ship’s wheel at the stern and you can look up and admire the spider’s web of masts and rigging that would have been used to sail the ship.

There are splendid views across the Thames too, though the skyline would have been scarcely recognisable to the original crew.

There’s something very special about this space.  Although you know that the ship is permanently sited on the banks of the river and not afloat, it’s so close to The Thames that you can really imagine being on the water.  And, there’s something really romantic about the setting.

The ‘Tween Deck was for cargo and storage.  Today, along with the lower deck, it’s used to showcase stories of the Cutty Sark.  In the dimmed lights, you get a real sense of what life must have been like on board the ship.  And, it’s the perfect place to explore more of the ship’s heritage.

The Lower Hold would have originally been used for ballast to balance the ship and for cargo.  Visitors get something of a feel for how it might have been when fully loaded with tea from stacks of patterned tea chests lining the floors and walls.  For me, something of a flashback.  I grew up in Malaysia and most of our belongings were shipped from the UK (by sea) in tea chests.  I remember playing in chests just like the ones on display and imagining previous cargo.

There’s a little theatre too, where you can sit and watch an introductory film.

Both ‘Tween Deck and Lower Hold have been carefully designed to include elements of interactivity to capture the imagination of visitors of all ages.  You can touch, see and smell some of what the sailors would have experienced.

Where to eat when you visit Cutty Sark.

Did you know that you can take tea under the hull of the ship?  Here more than anywhere else, you’ll get a feel for the engineering feat of 150 years ago.  It’s a stunning space dominated by the sleek copper hull.  At one end there’s a small cafe where you can enjoy a cup of tea or coffee or indulge in a classic afternoon tea with prosecco. 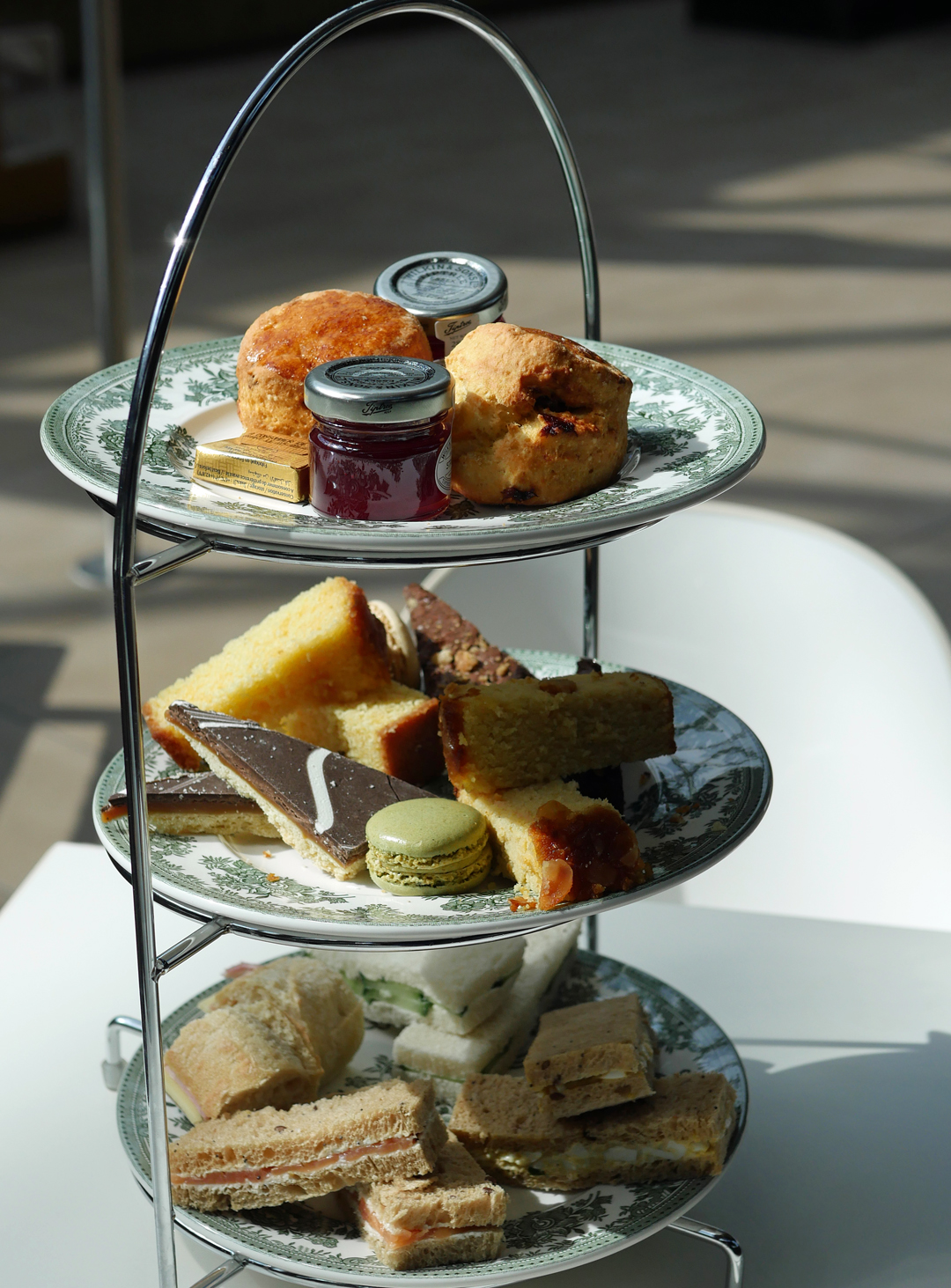 We were impressed by our tea with a collection of traditional cakes, sandwiches and scones at around £20.  While it’s nothing like the extravagance of a five-star hotel tea, it’s about a third of the price!  Book online in advance and you can pay for entrance to the museum and for tea at a discount price.

At the other end, there’s a display of figureheads from a host of ships, including the Cutty Sark herself.  Most of the collection, the largest of Merchant Navy Figureheads, were donated by Sydney Cumbers who had assumed the name of Captain Long John Silver, thanks to his eye-patch and love of all things maritime.  The collection now sits looking for all the world like an audience at the theatre.

If you are looking for something more substantial to eat in Greenwich we can recommend Champagne and Fromage for light snacks and fizz, or The Guildford Arms, a local Greenwich gastropub

How to reach Cutty Sark:

While it’s possible to drive to Greenwich, public transport from Central London to the Cutty Sark is very easy.

The nearest station is Cutty Sark DLR (Docklands Light Railway) and the Cutty Sark is clearly signposted from the station just 3 or 4 minutes walk.  DLR trains to Cutty Sark leave from Bank.

Greenwich and Maze Hill rail stations are around 10-15 minutes walk from the Cutty Sark, but each takes you through a different part of Greenwich.  Trains leave from Cannon Street and London Bridge

Oyster cards and contactless payment cards can be used at all local stations and on buses from Central London to Greenwich.

Perhaps the most relaxing option is to arrive in style on a riverboat.  Greenwich Pier is just a minute’s walk from Cutty Sark and you can choose from MBNA Thames Clippers offering a hop-on-hop-off river bus service along The Thames or City Cruises offering a range of sight-seeing cruises along the river.

There are a range of different ticket options available, with savings of around 10% for booking online. Options include packages with entrance to the Cutty Sark and afternoon tea for £28.35 for an adult ticket or tickets including riverboat fares from £29.50 for adults and £14.35 for children.  Find out more from the official Cutty Sark website

Thinking of visiting yourself?  Why not pin this post for later

Disclosure:  I was a guest of Cutty Sark and have received financial compensation for my time in writing this feature.  All content is editorially given.