You are here: Home / Events / Previous Events / A Night at the Opera – La Traviata, ENO at the Coliseum

Opera, the marmite of the musical world – as a young musician it wasn’t until I left home and went to University that I actually went to the opera, thanks to other family members being firmly in the ‘hate it’ camp.  But, of course, Opera was very much on the syllabus at college and I was dragged along by a friend to see ENO at the Coliseum in what was, at the time, one of the best-loved productions.  Cosi Fan Tutti by Mozart is a comic chamber opera and the production I saw by Jonathan Miller set the cast in Jane Austen style costumes.  It was witty, beautifully staged and perfectly performed.  And I was smitten.

From that time on, I’ve been a regular at both London opera houses and an occasional visitor to Glyndebourne.  I’ve already taken a friend along to one of ENO’s innovative ‘Opera Undressed‘ productions – where you can get a great seat to see the opera, a pre-performance talk about the production, an outline of the opera’s story in advance a complimentary gin and tonic at a post-show party with the cast and a discount for future ENO performances.  It was her first ever opera – and she loved it too.  What’s more, she was at ENO the night before me, taking another friend to see The Marriage of Figaro!  So it works!

I’d never been backstage at the Coliseum though, so I was thrilled to be invited along on a short tour.  The building was originally designed as a music hall – the ‘people’s palace of entertainment’ – by theatrical architect Frank Matcham and impresario Oswald Stoll. It first opened on 24 December 1904 and at the time was the only theatre in Europe to provide lifts for patrons to the upper levels of the house.  It was also the first theatre in England to have a triple revolve installed on its stage. It’s still the largest theatre in London with 2,359 seats.  It has a Grade II* listing from English Heritage and has retained many of its original features.

The Sadler’s Wells Opera Company took over the building in 1968, restoring and redecorating the building and installing a large orchestra pit.   The Company changed its name to become the English National Opera in 1974.  They provide unique productions of a whole range of operas all sung in English, although there are still surtitles.

We were thrilled to be allowed to sit in the orchestra pit – or in the case of my companion to actually make some attempt at conducting, to see backstage (there’s far more space than I’d expected, though apparently not enough!).  And to wander onto the main stage where the set was already in place for the evening’s production. 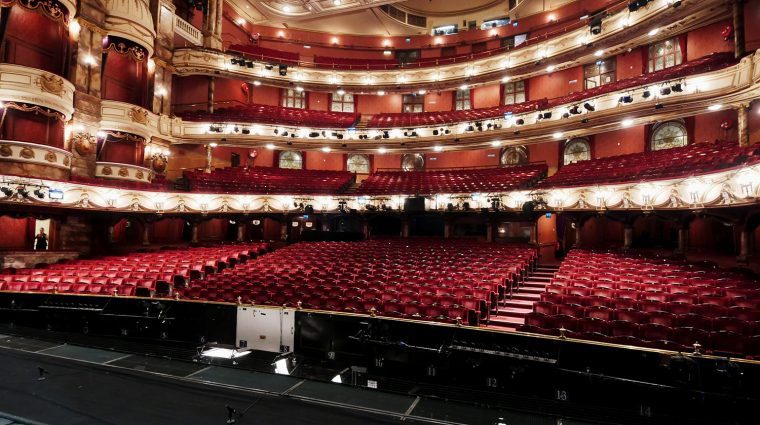 But before the opera started, we were treated to supper in the American Bar restaurant.  It’s a pretty, wood panelled area of the Coliseum where you can enjoy a two or three-course meal with dessert and coffee served during the interval.  I had no problem picking a starter of scallops and main course of beef fillet from the menu which has a good range of options for all.

A glass of Charles Heidsieck champagne to start was a nice touch – I continued drinking that with the scallops, though we ordered a bottle each of Tanguero 2017 Chardonnay and Kaiken 2016 Classico Malbec for the table

The seared scallops were perfectly cooked and tender, offset by the sweetness of the butternut squash puree and the brittle parmesan crisp. Chorizo did seem like an optional extra, which worked well for my peskytarian companion.

My beef fillet was also beautifully cooked to order and meltingly tender.  I loved the accompanying celeriac puree, cavolo nero and king oyster,  with a red wine, truffle jus.  Side dishes of vegetables were all perfectly cooked and I particularly enjoyed the green beans with toasted almond.

Dessert – in my case a deliciously rich chocolate mousse with maple rice cake, walnut brittle and caramelized plum – was served in the first interval.

The bell sounded at just the right point to allow us to find our way to our seats and the orchestra, followed by conductor Leo McFall filed into the pit.  For me, there’s something quite special about a Curtains Up when I’ve been standing on the same stage a few hours earlier.

The first set does have a real wow factor – and the opera opens with a party in full swing.  Courtesan Violetta played by Claudia Boyle takes centre stage celebrating her recovery from an illness.  Her friend Gastone appears with Alfredo (Lukhanyao Moyake), a shy provincial bourgeois gentleman who has apparently long adored Violetta from afar.  Of course, there’s something of a challenge in how to balance the flirtatious, cosmopolitan and seductive Violetta with the ingenious and jejeune Alfredo.  For me, neither lead quite worked.  Both voices were at times lost to the orchestra when they should have been the main focus.  And in the first act, neither seemed quite settled in their role.

Staging for the first scene of the second act is a cut-back, country space.  Although the pair are happy together, Alfredo discovers that Violetta is selling all her possessions to fund their lifestyle and returns to Paris to raise funds himself.  In the meanwhile, Alfredo’s father Giorgio Germant, played by Alan Opie, appears and challenges Violetta to leave Alfredo as her reputation is destroying his family.

For the second scene, the opera returns to Paris and another party set with costumes and staging similar to the first, though darker in nature.  The party is interrupted first by Alfredo, in search of his love and then by Germant.  As Violetta collapses on stage, the curtain falls.

Act three was originally set in Violetta’s bedroom, though here the now skeletal heroine is digging her own grave.  I found this final act more convincing both vocally and dramatically (and in opera the two are intertwined).  Of course, Alfredo returns, of course, Germant reappears and asks forgiveness and of course Violetta dies…

This is the first production by Daniel Kramer as Artistic Director of ENO.  I’m left wanting to see more because for me there were moments of brilliance punctuated by sections that simply didn’t quite work.  I’ve seen too many operas where the party scenes are played out as some kind of orgy to be wowed by these two stagings.  But,  knowing a little more about the building,  I wonder how much of my issue with the vocals comes down to the size of the house and the location of our seats (fourth-row stalls).  Sitting a little further back can change the balance completely – a bit like frequent fliers, opera afficionados tend to know exactly where they like to sit and always try to book the same seats.

I am entirely convinced that ENO is a wonderful institution and a great place to see your first opera. I do still go regularly and as it is now nearly forty years since I first did so, I am a great advertisement for that.  And it’s a great place to go back to and see old favourites.  Even if you end up comparing productions and criticising parts you’d prefer to see done differently, it’s always an experience and you will always be entertained.

If you haven’t been to the Opera before, please do take a chance on the ENO’s Opera Undressed and find out for yourself.  And if you have been, remember to check out what is on at ENO this season.

Tickets start at just £4 – and there are a range of dining options including fine dining at a very reasonable price,  two courses in the American bar where we ate will set you back £20 or three for £25 per person.

There are just two showings of Traviata left this season, on 11th and 13th April.  To find out more and to book for other productions at the London Coliseum, including some spectacular ballets and musicals check the ENO website.