Travelling from London St Pancras to Rotterdam by Eurostar:

On a Friday afternoon in September, I watched the southern English countryside flash by in a swirl of green fields and blue sky. Just a few miles into the journey I felt the stress of the working week recede. Only 90 minutes earlier I  had closed my office door, caught the tube to St Pancras station and made my bid for freedom. What a great way to kickstart the weekend aboard the 17.31 London – Amsterdam service, in my case travelling from London to Rotterdam with Eurostar standard premier.

Introduced in April 2018, this new service cut time and effort off my journey. It is a trip I have made several times over recent years – once by car, another by plane and a third time by train (changing trains at Brussels, as was previously required, for me entailed waiting in the middle of winter on a freezing platform for a train that trundled slowly towards Amsterdam). Each of these methods had its drawbacks but the direct Eurostar train from London to Amsterdam via Brussels and Rotterdam took the hassle out of the trip and enabled me literally to sit back and relax.  Eurostar can do nothing about other passengers though, a pair of whom spoke on top of their voices throughout the entire journey. Most people around me donned earphones and I must remember to bring some along next time!  Eurostar also cannot control the weather. It was a stormy night on the Continent causing the train to arrive late as it could not travel at its full speed. Still, I was much happier on terra firma in that wind that I would have been 35,000 feet up, or worse still stranded in an Airport holding area.

Thanks to a complimentary ticket from Eurostar for the journey from London to Rotterdam, I found myself in Eurostar Standard Premier for the first time and I was curious to see whether the facilities offered would encourage me to spend extra on a ticket in future. The first thing I noticed was the number of individual seats available if you preferred to be seated alone without a stranger at your elbow.  Of course, there were also the standard four seats arranged across a table or two seats alongside one another. I had a table for two, facing my partner as if sitting in a restaurant. The seat in Eurostar Standard Premier was larger and comfier than in economy. Power sockets were available for passengers, useful if you need to charge up your devices and there were a selection of free magazines.

Eurostar Standard Premier included a simple light supper which meant there was no need to go in search of the onboard catering. Complimentary drinks were a nice touch as were the small bags of nuts and Dutch liquorice that were offered once we had left Brussels.

With the train stopping in Rotterdam, I took the opportunity to visit the city centre where I enjoyed some of the most exciting urban architecture. The city was destroyed by bombing during WWII heralding an opportunity to rebuild in a modern and dynamic fashion. Don’t miss De Markthal where great design houses a food court. Nearby the Cube Houses are jaw dropping.

I hopped on the metro to visit tiny Delfshaven from where the Mayflower pilgrims sailed in 1620 en route to the New World. UrbanGuides provided a guide with encyclopaedic knowledge and unbeatable energy. I always enjoy a walking tour as one learns so much more than a guide book can offer.  I stayed the night in Rotterdam at the historic Hotel New York which was a luxurious stay with stunning views over the Nieuwe Maas. Book dinner at the hotel’s restaurant or its cocktail bar which offers fine dining.

The next morning I picked up a local train for a half hour ride to Leiden, a charming town where I felt I was stepping back into the 17th century. History buffs will be spoiled for choice – don’t miss a visit to the American Pilgrim Museum or the Pieterskerk to capture the spirit of the Mayflower pilgrims who lived in the city in the early 1600’s after escaping religious persecution in England. 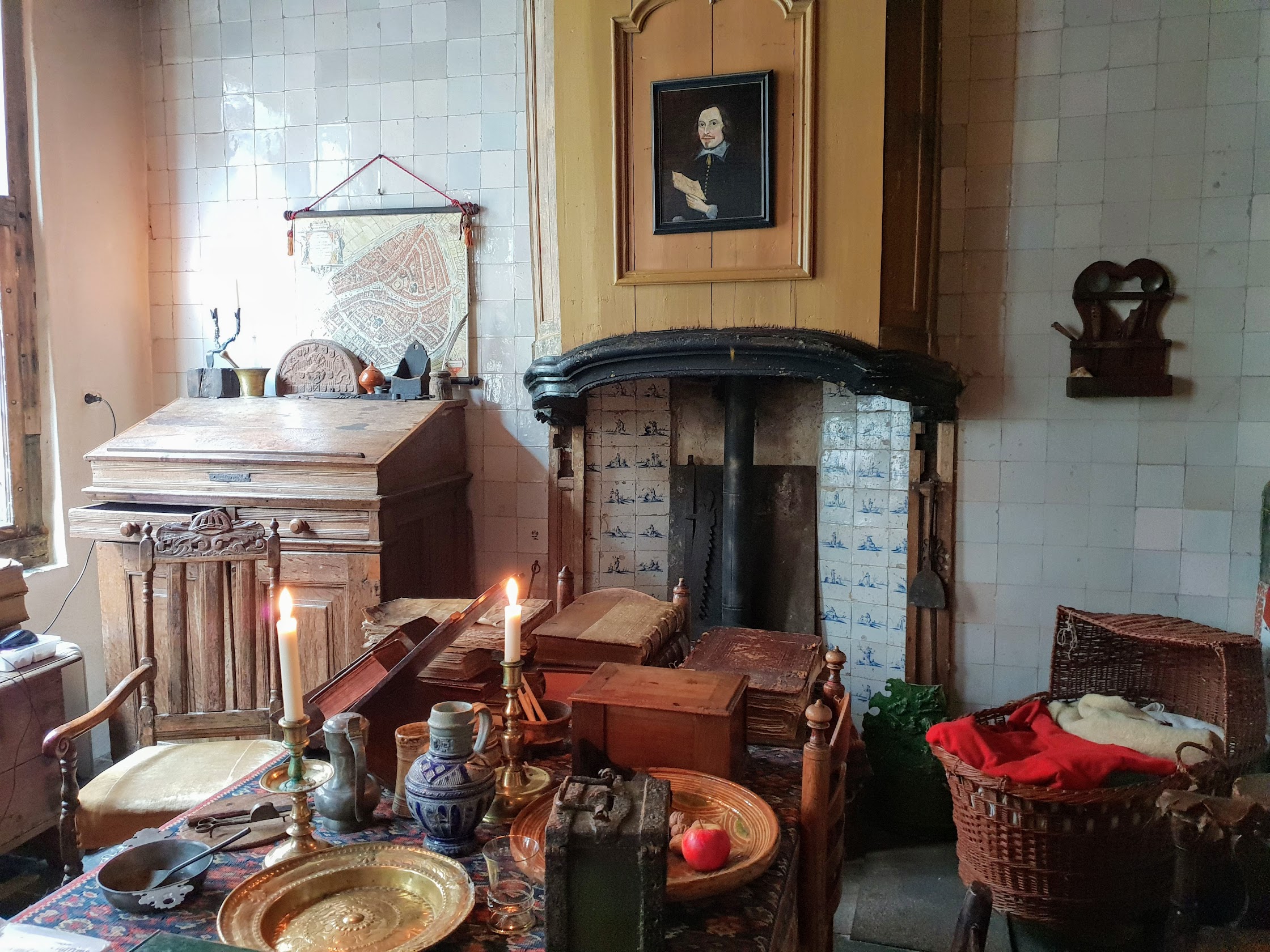 Modern comforts are on offer too  and foodies will enjoy the wide range of restaurants and coffee shops as well as the market lining the canals. I came away with bags of tulip bulbs. I lunched on burrata and Parma ham in the middle of the historic Town Hall part of which is now a restaurant, Italian bar-bistro City Hall.

The afternoon brought a whirlwind tour of the Hortus Botanicus  followed by a relaxing hour long canal cruise of the city with Rederij Rembrandt.

I even managed to squeeze in a quick visit to the Rembrandt Studio where the young artist took lessons as a boy. By dinner time I sat, beer in hand, watching the sun set over the harbour at Lot & de Walvis. It is a funky restaurant with a great vibe, a good varied menu, and a terrace for long, summer evenings.

Spending the night at City Resort Hotel could not have been more convenient as it is situated alongside Leiden Central Station from where we travelled back to Rotterdam. You can even have an early morning swim and sauna on the 12th floor with panoramic views. Being on the lazy side I enjoyed the view over a leisurely breakfast instead. After the large buffet on offer – Dutch hotels really know how to lay on breakfast – a bit of exercise would have been a good idea.

The return journey to London was far less enjoyable than the outbound one but hopefully, all will be resolved by the end of 2019. At the moment border control issues require that travellers have their passports checked in Brussels and not in Holland. Therefore, one takes either a fast Thalys or an Intercity train from Amsterdam or Rotterdam, getting off in Brussels to connect to the Eurostar to London. The day I travelled, the queues at Brussels station were not only very long but terribly slow. So slow that the final call for boarding was announced when we were still approaching the border control desk and there were hundreds of people behind us, many of whom had not yet had gone through the baggage security checks. By the time I got to my seat, I was stressed and rushed, quite the opposite of how I had felt on the outbound journey. The train’s departure was delayed due to the long queues. These problems should be ironed out once the border control takes place in Holland. Indeed, while at Rotterdam station, the platform was being prepared as we watched.

Book early and it’s possible to get a good price travelling on Eurostar from London St Pancras to Rotterdam. As for ease and relaxation – there is no comparison for me. No long and pricey taxi ride to an airport, no two-hour check-in with inevitable airport delays, no landing in an out of town airport requiring extra transport costs. The Eurostar service dropped me slap bang in the centre of town at both ends of the journey.  I will certainly use this service again.

Thinking of travelling from London to Rotterdam via Eurostar?  Why not pin this post for later

This journey was part of a project to explore the history and heritage of the Mayflower Pilgrims throughout the UK and in the Netherlands.  We’ll be sharing more of that in future features on London Unattached.