Tea for a Gentleman at the Athenaeum Hotel, Picadilly:

Much as I love afternoon tea, I do sometimes crave a savoury alternativ .  There are a number of hotels in London which offer what is usually called a ‘Gentleman’s Afternoon Tea’.  So when I was invited along to the Athenaeum to a press review of the afternoon teas on offer  that was just what I picked.   There was whisky rather than champagne on offer and the balance of the tea appeared to be just a little more tipped to savoury pastries.   But, the one thing that stayed constant was the offering of tea. 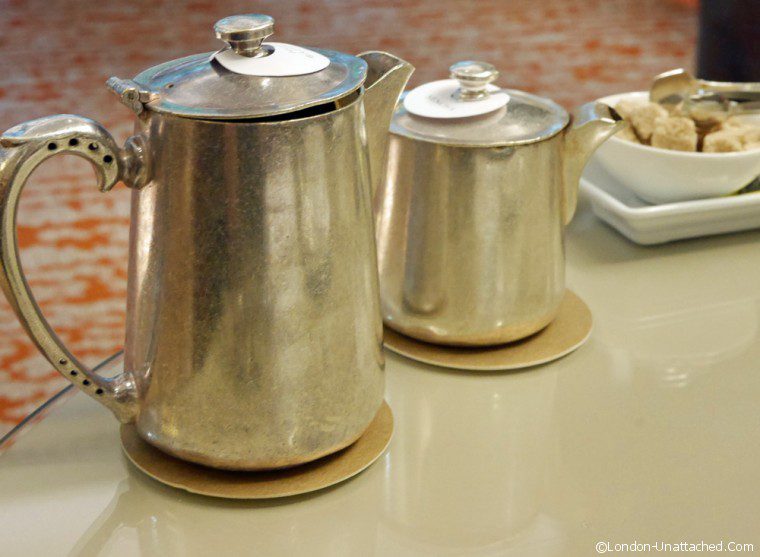 At the Athenaeum, the tea menu is relatively short with twelve options, but still manages to include some very special options, all presented in a pretty wooden box.  Sencha is a particular favourite, a green tea which is cleansing and refreshing, which I thought would work well with the savoury tea to follow.

The Gentleman’s Afternoon Tea comprised a platter of savouries.  A tiny pie, a wild boar sausage roll, a seasonal terrine and some cheese straws with welsh rarebit.  All extremely tasty, particularly the suet pastry crusted steak and ale pie which managed to achieve a good balance of pastry and filling despite it’s diminutive proportions.

The Welsh rarebit dipping sauce could perhaps have been improved with something a little more substantial than the chili cheese straws to dip.  But, then that’s because I really liked it!

In fact I’d have been quite happy to keep the dipping sauce to go with the savoury scones – mature cheddar and crispy bacon.  These were delicious but, despite a topping of melted cheese, seemed a little dry.  I suspect it is simply that we normally split scones and then add butter or cream, rather than any fault with the pastry chef.

At this point I was offered a dram of single malt – an excellent match with the cheesy scones.

We’d started the tea at around 5.45pm.  The final part of the menu should have be home made whisky chocolate truffles, sticky toffee puddings and a piece of whisky fruit cake, but nothing sweet was offered and I didn’t actually realise what should have been on the menu till I checked when I got home.  I can remember being a little suprised that the menu was entirely savoury, but  by this stage I was quite full and probably wouldn’t have been able to eat any more.  I’m also not sure whether the hotel simply needed to clear the room for dinner service and, since this was a press preview, we may well have been offered a cut down version of the full tea. I certainly ate quite enough to be able to recommend the Gentleman’s Afternoon Tea for anyone looking for a slightly different offering.

I have been to the Athenaeum Hotel a couple of times before, most recently to learn about the living wall.  It’s a discrete and elegant place where service is generally slick and the staff are charming.  I loved the old fashioned silver tea pots, the carefully selected leaf tea menu and the comfortable garden room where tea is served.  And, every time I walk past I look up at the amazing living wall.