You are here: Home / Restaurant / Oxford Circus / The Year of the Rooster at Hakkasan Hanway Place

Chinese New Year is approaching fast.  It’s the year of the Fire Rooster a year which (apparently) should see progress, a move towards honour and integrity and to a general level of restraint.  This year we will all be more polite and less stubborn too. Sounds good to me and a perfect excuse to celebrate.  The Chinese New Year begins on January 28th and celebrations in earnest will start on January 27 and last until February 2.

In anticipation, Hakkasan has just launched its limited edition Chinese New Year signature menu – and I went along for a sneak preview.  Hakkasan Hanway Place is the original restaurant in London – there is now a second Hakkasan in Mayfair and sister restaurants of Yauatcha in Soho and the City, HKK in the city and Japanese Sake no Hana in St James’s.  I remember it opening, at a time there was nothing like it in London – and I still love Hakkasan.  On this visit,  I discovered that the calming interior was designed using feng shui principles and has never been changed.  Perhaps it’s the feng shui that makes it feel like home to me?

We started with the special cocktail created for the event.  The Waltzing Collins is a long drink with Baiju, sake, mandarin, lemon, grenadine, cucumber and sparkling wine (£13.50). Very refreshing with citrus notes and a definite kick of alcohol, it’s a convincing way to start the evening.

If you happen to be abstaining, there’s a non-alcoholic version too – the Waltzing Temple £8, with mandarin, lemon, grenadine, cucumber and lemonade.  We found it a little sweet for our tastes (or could it just have been a preference for the alcohol!)

The New Year’s menu has three starters.  As my companion was pescatarian, we swapped out two for an alternative of soft shell crab, one of my personal favourites.  Hakkasan serves their soft shell crab with what they describe as egg floss – apparently, it is made by whisking egg really vigorously as it’s fried.  It turns out as a kind of delicate vermicelli mixture, a perfect complement to the tender and delicate deep fried crab.

The full menu includes two other dishes.  The first,  Fortune Tale with roasted chicken, jellyfish and mooli.  A special dish,  it is a Chinese prosperity salad which is tossed together at the table in front of guests – so, having missed out,  I guess I might not get rich next year?  The other dish we missed was double-boiled fish maw and chicken soup, a particularly decadent dish made using luxury Chinese ingredients.  I have absolutely no doubt they will be amazing.

Although the main courses include one meat dish, we agreed that I’d eat less of the two fish dishes and all of the duck.  First to arrive was stir-fried lobster in a fragrant white pepper sauce.  It was beautifully cooked with tiny morsels of the firm, sweet lobster in a sauce that was ticklish rather than hot and with deep fried pieces of what I think was lotus root.  I was already regretting saying I would eat less of the fish…

Meanwhile, the duck had appeared.  Meltingly tender it was served with a rich, spicy and sticky bean sauce, tender lotus root and strips of vegetables.

The vegetable dish of a stir fried selection of mushroom in abalone sauce with tenderstem broccoli.  Apart from looking beautiful, the rich umami flavours were perfect and I loved the textural contrast between the nutty, al-dente broccoli and the soft mushrooms.

Our final dish was my favourite of the main courses.  Rolled and steamed turbot in supreme stock with cloud ear and saffron.  The turbot was properly cooked, firm and meaty but not overcooked.  And the sauce, a delicate, buttery and silky mixture was infused with saffron.  A scattering of cloud ear mushrooms added a touch of umami to create a perfect dish. 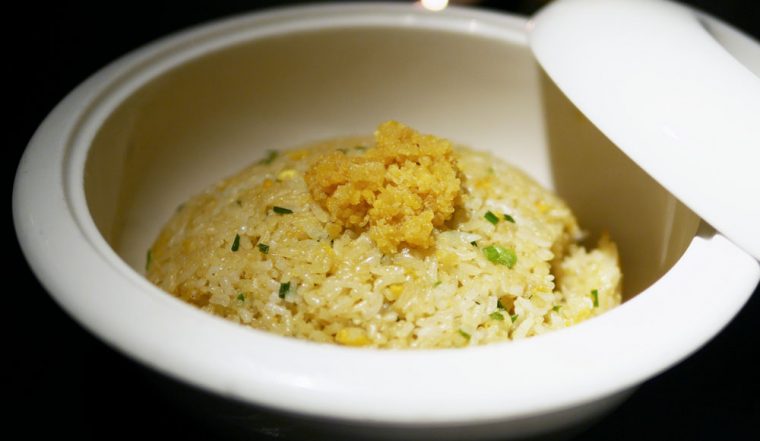 There was, of course, a large bowl of sautéed egg fried rice with spring onion but we both tried to avoid eating too much in the knowledge that there were three desserts to follow.

First up, two little goldfish – actually steamed custard and red bean rice cake.  Surprisingly light and delicate and not over sweet, these were a pretty introduction to the desserts.  And, I just wanted to pick them up and take them home…

Next, classic deep fried sesame balls.  Of course, they were faultless, but by now I wouldn’t have expected anything less.

Then, the finale – called ‘golden feather’.  It turned out to be an egg in a nest with a gold feather.  All edible, the shell of the egg was made from caramelised white chocolate, the white was the lightest ginger pannacotta and the yolk a sweet, mandarin compote.

We were stunned by the beauty of this dish.  And, it tasted delicious too in a plate-lickingly good way, though neither of us would have dared in the refined surroundings of Hakkasan!

Throughout the meal, we drank a bottle of pinot noir, Jülg 2014 Spätburgunder.  It was a light crisp red wine full of red fruit flavours which worked reasonable well with everything.

The Hakkasan limited edition Chinese New Year signature menu costs £88 or £108 per person (the £88 menu doesn’t include the abalone or the steamed custard and red bean rice cakes (goldfish).  It is available for parties of 2 or more until 11th February.  During that time, you can share your hopes for the coming year by writing wishes on the special trees inspired by the Lam Tsuen Wishing Trees in Hong Kong.  And, if you book for 28th January, you’ll be able to see traditional lion dance making its way through the restaurants.