I’ve travelled to Hamburg a couple of times in the last year and felt frustrated not to have got a grip on the music scene. So an invitation to the city’s ElbJazz Festival and a chance to investigate the Beatles’ Hamburg backstory in the location where they developed their identity was really welcome. The river Elb is the main artery of this great city pumping the economy forward through the conduit of one of the world’s major ports. It’s only four hours to the North Sea and the harbour is framed by huge container ships with serried ranks of cranes lining the dockside.

So it is fitting that the Jazz Festival is taking place in the new Elbphilharmonie concert hall in the HafenCity quarter of the city. The stunning building, the tallest in Hamburg, was designed by Swiss architects Herzog & de Meuron. Its nickname is Elphi and she perches on the top of an old warehouse building.

My first visit to the festival was to see Norwegian saxophonist Jan Garbarek playing at the Elphi but outside the hall, I bumped into my friends the fantastic JazzCoTech dancers doing their thing.

Going to the concert was an opportunity to have a great view of the city from Elphi’s Plaza.

The ‘Big Hall’ holds 2,200 people and it was very full for my first concert. It’s a really comfortable space and the concert sound was excellent. 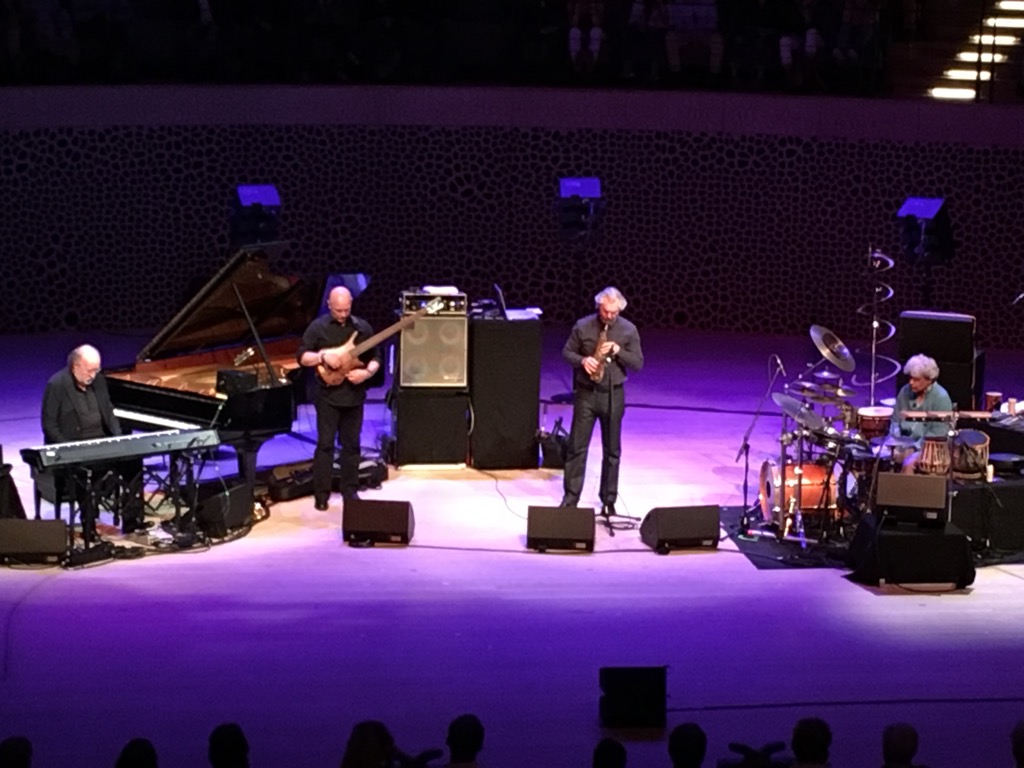 Garbarek was very much the sound of ECM Records in the ’70s and 80s but more recently has teamed up with early music vocal group The Hilliard Ensemble with stunning results. But now he is back on the road with his own band featuring the amazing Trilok Gurtu on drum kit and percussion, Rainer Brüninghaus on piano and Portuguese bass maestro Yuri Daniel. The set opened with a lengthy suite featuring a plangent minor pentatonic melody doubled between Garbarek’s sinuous soprano and the fretless bass of Daniel. Most of the tunes had shifting moods with extended sections of virtuosic soloing from all the band members. Moving from a heavy Latin feel to a Breckerish funk, an extraordinary extended Trilok solo was followed by an extended Keith Jarrettish piano feature. There were flamenco influenced sections, sinuous Indian melodies and Norwegian folk tunes in a beguiling mix of virtuosity, compositional skill and ensemble playing.

Next up was the  Joshua Redman trio and to see the American tenor sax man I had taken the shuttle to the festival’s main site, the Blohm and Voss shipyard in the harbour area.

With two main outdoor stages and several indoor venues, it made an incredibly striking and atmospheric setting for the music. Making up Redman’s trio were Gregory Hutchinson on drums And Rupert Robinson on bass. In a nod to their location, the band opened up with a swinging deconstruction of  German composer Kurt Weill’s Mack The Knife. Redman cuts a friendly figure on stage in contrast to the Nordic cool of Garbarek and much to the amusement of the crowd apologised for Donald Trump’s ducking out of the Paris Climate agreement. The post-bop trio were clearly having a good time with highlights including a performance of  Joe Lovano’s Blackwell’s Message and a groovy waltz called 2nd Date.

Snarky Puppy are firm festival favourites these days and played tracks from their new album Culcha Vulcha as well ‘Greatest Hits’ including my top Snarky jam Shofukan. With a stage show that majored in dry ice and a fab ligh, ing they rocked the dockyard with a fun and energetic performance. However the highlight of the festival for me was Gregory Porter. He has an extraordinary rich voice and a real sense of authenticity that infuses his Marvin Gaye influenced socially conscious songs. For this show his band was expanded by the addition of the Kaiser String Quartet that added a new textural element to Porter’s emotional palette. His performance included a rollicking Take Me To The Alley, a passionate Someday We’ll All Be Free and an emotional reading of Oh Laura. The show peaked with an extended reworking of the classic Papa Was A Rolling Stone featuring a wild piano solo from Chip Crawford.

ElbJazz featured much more than I had time to see with hundreds of artists playing over the different sites covering the rich diversity of jazz in the 21st century. Whether you’re a hardcore fan or just into hanging out it makes a great couple of days musical adventure. Running concurrently with ElbJazz was the Theater Der Welt (Theatre of the World) festival. We had the chance to see a performance of Lady Eats Apple at the Thalia Theatre by Back to Back Theatre, an Australian company working with actors with disabilities. Wearing headphones throughout the performance we experienced an astonish audio and visual meditation on death that was life-affirming, beautifully acted and containing one of the most astonishing reveals that I have experienced in the theatre. Hamburg clearly takes its arts seriously and backs that up with investment that justifies its position as a cultural hub.

My final Hamburg cultural adventure was enjoying ukulele playing singer-songwriter Stephanie Hempfel’s Beatles tour. It centres on two streets off the infamous Reeperbahn in the St Pauli area of the city where the music clubs were located and is a brilliant way to get a feel for what it was like for four teenage Liverpudlians leaving home for the first time. They came to the red-light district of Hamburg with a handful of songs, started to grow up and to build an identity with more than a little help from their Hamburg art student friends. Stephanie brought it all to life serenading us as we went and for anyone interested in pop culture it’s a must do.

I’ll be covering some great areas to visit, places to eat and stay in my next post but if you are in the Hamburg mood then visit Hamburg on Tour – a pop-up event coming to London on 20 – 21 October, designed to recreate “that Hamburg feeling” in the heart of Shoreditch! Think live music, craft beer and festival vibes on Brick Lane, at The Boiler House.

Thinking of travelling to Hamburg?  Why not pin this post for later