Whilst Veganuary has just slipped into the rear-view mirror, plant-based lifestyles are increasingly an all-year-round commitment. This has led to the growth of ‘plant-powered’ eateries such as Hampstead’s KOJO which keeps vegans and omnivores alike content with a creative menu, now available all day and for dinner.

KOJO’s flagship store on Hampstead High Street in leafy north-west London is spacious and light. The restaurant seating area occupies the left-hand side of the space while a juice bar and coffee shop, offering a wide range of vegan and refined sugar-free dessert options, is located on the right. KOJO centres itself as the plant-based hub of the community with its array of offerings for any time and any meal. Another KOJO store in Liverpool Street is planned to open later this month.

The restaurant’s interior reflects its environmental mission with green plants and wooden tables and chairs creating a softened and calming ambience along with a tranquil playlist. The ceiling mural, hand-painted by local artist Graceland London adds a splash of colour and fun to the décor. KOJO supports plant-based eating as part of a healthy lifestyle and an opportunity to reconnect with nature, and the new dinner menu offers an intriguing mix of options from a variety of cuisines. The drinks menu also offers impressive choices, with non-drinkers offered a mocktail version of every cocktail.

From the small plates section of the menu, I was intrigued to try the ‘tuna’ nigiri made from marinated tomato peel and served with tamari soy sauce and sesame. In appearance and texture, the nigiri was remarkably close to the tuna version and is a substantial bite. The sushi rice was well prepared and the marinated tomato was tasty in its own right. Next from the menu, the organic vegetable gyoza (one of the few items at KOJO which contains gluten, and is marked as such on the menu), was full of flavour – creamy, delicately crispy and served with spring onion.

Continuing on KOJO’s creative theme of adapting restaurant classics to a plant-based audience was the playful ‘steak’ frites from the big plates section of the menu. The ‘steak’ is instead sliced tofu cut into squares and crispy on the edges, and seasoned with peppercorn sauce. Tofu, as the steak replacement, was a good choice, and not reliant upon branded meat alternatives, and well prepared. The shoestring chips were crispy, moreish, and satisfyingly irregular in cut. My favourite of the dishes offered, a popular hit amongst KOJO regulars, was the Tamashi ramen. The warm and wholesome broth was healthy and filling. Also containing gluten-free noodles, bamboo shoots, mushrooms, bok choi and crispy flakes, the ramen was perfect for a cold winter’s night and would be well worth a return visit. 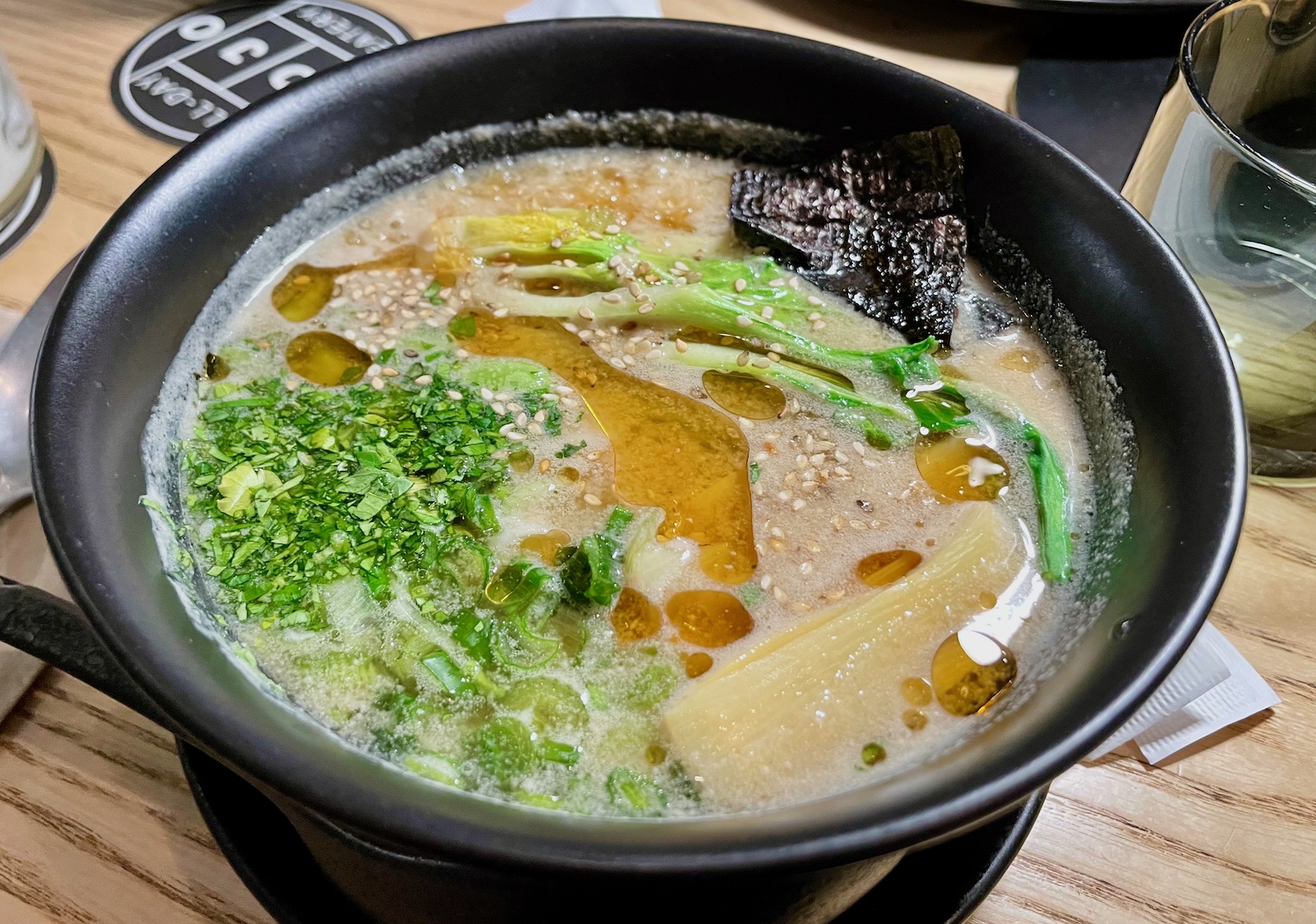 For dessert, we enjoyed the KOJO platter for two, which was an excellent selection of the best the KOJO bakery had to offer including brownies, chocolate mousse, amaretti biscuits, and cheesecake which was creamy, lemony and had a soft base. The highlight of the dessert menu was the cereal milk ice cream. Delightfully fun, the soya-based ice cream perfected the cereal bowl taste and was an excellent way to end the meal. Unlike ice cream of different flavours, the cereal milk variety only gets better as it melts.

Catering for a range of clientele from the early morning joggers to the brunch crowd and late-night diners, KOJO has it all for those embracing the plant-based way of life, as well as those who want to try something healthy, tasty, and good for you and the planet.