Jump to the recipe for Melba Toast

What is Melba Toast:

Simply put, melba toast is sliced bread, cut to create fine pieces and then toasted.  It’s best made with slightly stale pre-sliced bread and is a great way to use up leftovers.

Easy steps to make your own Melba Toast:

Honestly, I’m not sure if you need a Melba Toast Recipe.  It’s that simple.

* if you prefer, leave the final cut down the middle until the bread is toasted on both sides.  This is a useful tip if your bread is particularly fresh.

How I learnt to make Melba Toast:

There are certain things which I firmly believe should be passed down through the generations.  The making of Melba Toasts is one of those things – tiny sophisticated triangles of biscuity bread which pair perfectly with pates and dips and which look so much better than a bowl of nachos.  They are, after all, homemade. I’m going to share my own method for making homemade Melba toasts, together with a little story about how I learnt about the mystery of the Melba Toast and the perfect Melba toast recipe. 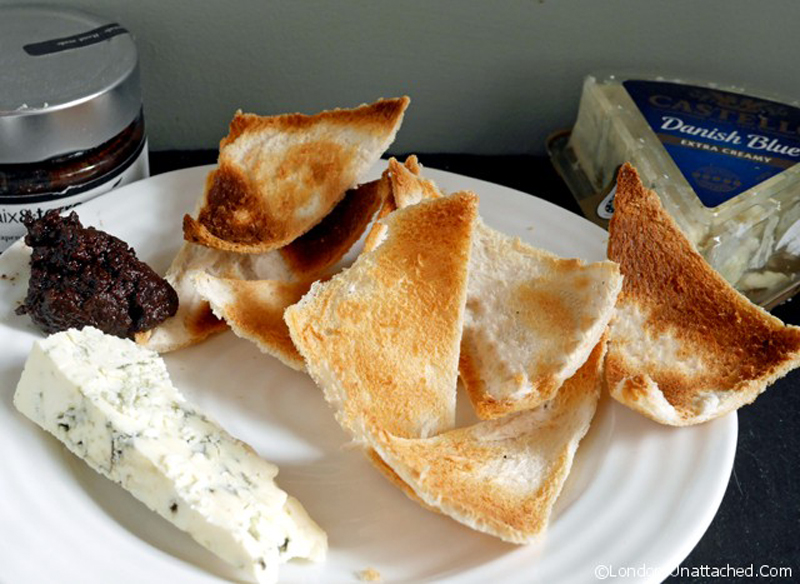 Lovely as my mother was, she didn’t know about Melba toast.  She bought those rather unpleasant and nothing like the real thing packets of Melba toasts from the local grocer.  She’d top them with pate, homemade salmon, mackerel or chicken liver terrine.  And garnish with whatever (usually lumpfish roe for the fish versions and sprigs of parsley for the meat.  I didn’t particularly like them.  Homemade sausage rolls or mushroom vol-au-vent were a much better idea in my opinion.  Then I met Ivy.

Ivy was an octogenarian cellist who had originally trained as a musician but then got caught up in the war and joined the WRAC – the army catering corp, where she learnt to cook military dishes during the war when rationing was in full swing.  I met her in the local orchestra I played with and she decided that I should come for lunch every Sunday before rehearsals.  When I found myself a boyfriend he too was invited for lunch and we were treated each week to a three-course meal which owed much to her military training.  I remember a kind of Bakewell tart where the almonds were substituted for gently dried ground broad beans.  And beef olives – a way of stretching small quantities of not such good steak by stuffing it and serving it with a rich gravy.  Her food was remarkably good.  And one of her favourite starters for us was a chicken liver pate accompanied by Melba toasts.

I learnt that to make Melba toast you just needed stale sliced bread.  But somehow, with the crusts cut off and the bread carefully prepared the end result resembles more of a posh cracker than a cheap piece of white bread.

The origin of Melba Toast:

The story of how Melba toast was created is quite fascinating in its own right:

Nellie Melba an Australian operatic soprano was one of the most famous singers at the turn of the 19th Century.  Today, she’s as well known for the foods developed in her honour as for her singing.  With a Rubenesque figure and a love of food, Dame Nellie Melba struggled to manage her weight.  When she was working in London she often stayed at the Savoy, where August Escoffier was the legendary head chef at the time.  He created Melba toast for her when she was unwell in 1897 and wanted a light snack.  And, he also concocted a number of other dishes in her honour of which the best know is Peach Melba.  Melba sauce is a sweet puree of raspberries and red currant and there’s another dish called Melba Garniture, with chicken, truffles and mushrooms stuffed into tomatoes.  Given her reputation not only as a flawless soprano but as something of a femme fatale, I do wonder whether Escoffier perhaps had a soft spot for her.

if you do feel the need for a Melba Toast Recipe here’s one to show you how you can make Melba toast for yourself.  As I said, it’s a piece of cake…or should that be a slice of bread?

A classic way to use up leftover stale bread

Want to save this recipe for later?  Why not pin it!