What better combination than Champagne and History?

An evening of champagne and history is a winning combination especially when tucked away in an area of London that takes visitors back through the centuries. Now in its fourth season, the Middle Temple pop-up champagne bar is open throughout the summer months.

Middle Temple, built in the mid-1500s, has been home for centuries to barristers and their pupils. It is one of the four ancient Inns of Court, medieval legal associations to which all barristers must belong. Entering the precincts is like walking back in time. Approaching from the Embankment, visitors pass through a magnificent archway and up a cobbled street, surrounded by buildings housing the chambers of some of the UK’s finest legal minds. My destination was not a legal office but Fountain Court – a beautiful square in the centre of Middle Temple. It has, of course, a fountain which is surrounded by trees. It is a most peaceful spot, a surprisingly tranquil location not far from the traffic of Embankment and Fleet Street.

Fountain Court, a feature of Middle Temple for centuries and subject of a 1738 painting displayed in the Prince’s Room, is the venue for the annual champagne bar the launch of which London Unattached was invited to attend. Unfortunately, the Great British Weather had other ideas and as evening approached, the heavens opened in a deluge of rain. The champagne tasting was moved indoors to Tasker’s – the Middle Temple bar – which also hosts the Champagne bar during inclement weather – all too regular a feature of summer. 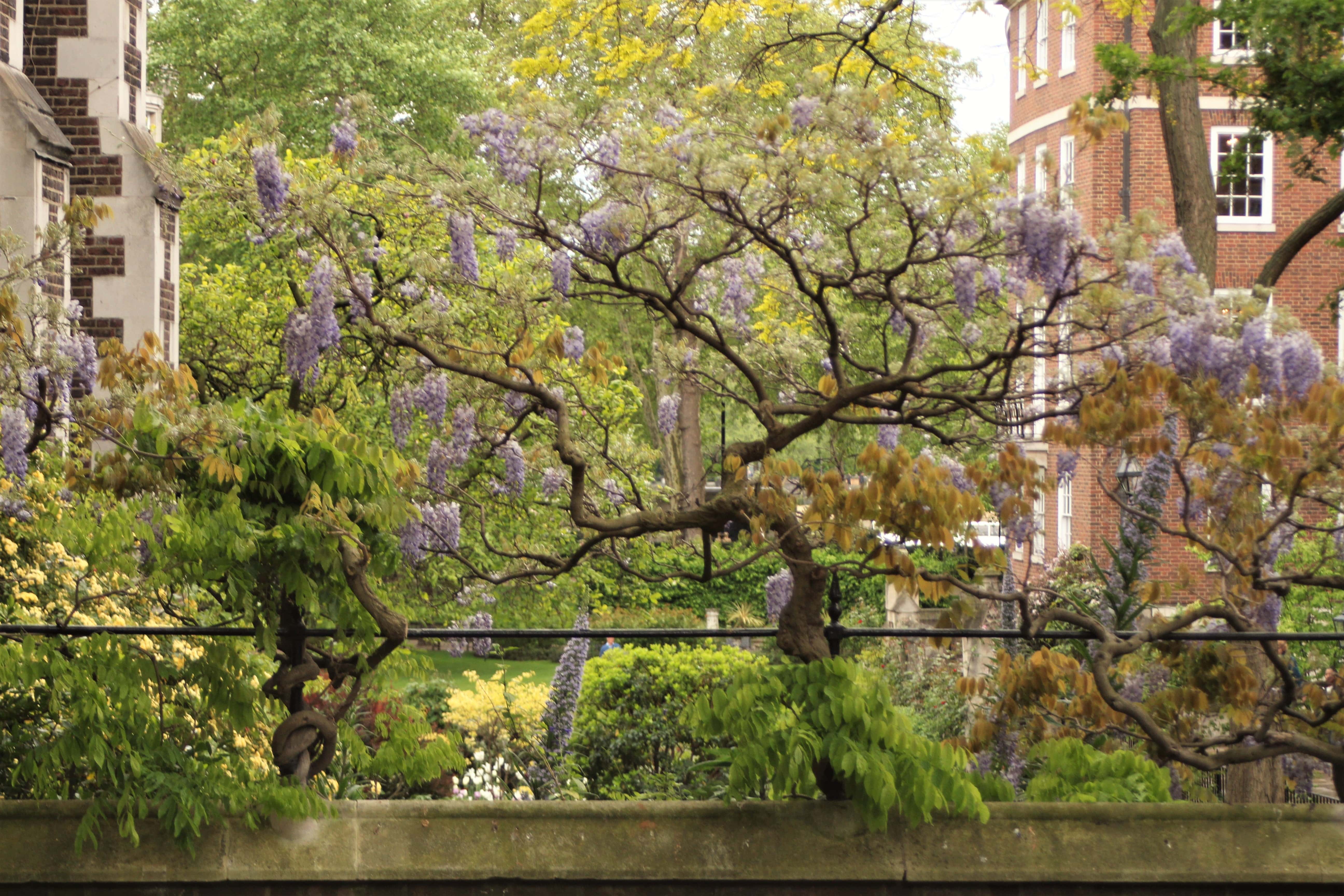 Before any corks were popped it was time for a tour of Middle Temple. The Hall was being set up for a formal dinner, although at lunchtime this magnificent venue operates more like a canteen for the legal fraternity. Middle Temple Hall is a magnificent space, boasting a double hammer beam roof, one of the finest examples of an Elizabethan Hall in the UK.

Built in 1570, it has beautiful stained glass windows, one of which includes the date of completion, which is considered a great collection of armorial glass. The Hall hosted the first recorded performance of Twelfth Night when Shakespeare put his play on in the hall in 1602. Although a section of the Hall sustained damage during a bombing raid during the Second World War, the stained glass, all original, had been removed for safekeeping before war broke out. The windows are composed of crests of some very interesting people. One is Walter Raleigh, invited to be a member of Middle Temple in his capacity as explorer, perhaps to be a Medieval networker, but who was later condemned to death for treason. The judge who presided at Raleigh’s trial is coincidentally alongside him in the window panel, John Popham. He was the Founder of the State of Virginia, commissioned to write the Charter that established Jamestown in 1606, fourteen years before the Mayflower sailed for the New World. Another pair of crests alongside one another are Jekyll and Hyde.

A magnificent table carved by John Lewis is but one of the outstanding features in the Hall. Made from a single tree, a gift from Elizabeth l, it is an impressive 29 foot long. It looked particularly beautiful bedecked with an extraordinary array of silver that was in the process of having a final polish ahead of the dinner.

The Hall and surrounding wood panelled corridors are lined with wooden shields on which the coats of arms, the personal insignia of past and present Readers, eminent barristers and QCs invited to the position by the Parliament of the Inn, who teach the students. They traditionally gave speeches and lectures to those training at Middle Temple. Nowadays there are two annual lectures at Middle Temple followed by a formal dinner.

By the 19th century the Hall became too small and a suite of rooms was built as an overflow. In one of these rooms hangs an important document. Dated 1608, it is a copy of an agreement with the King. The reason Middle Temple is so called is because it all belonged, in the Dark Ages, to the Knights Templar, a Catholic military order that protected pilgrims to the Holy Land and was recognised by the Pope in 1139. They grew rich and powerful and built on land that now houses the Middle and Inner Temple. Around 1310 they were excommunicated and lost all their lands and possessions which the King acquired. The lawyers were already there because they had begun to rent rooms from the Knights Templars. When the Templars had to leave, the lawyers stayed.  Because it is Temple land it has special rights and privileges because the Templars only reported to the Pope. 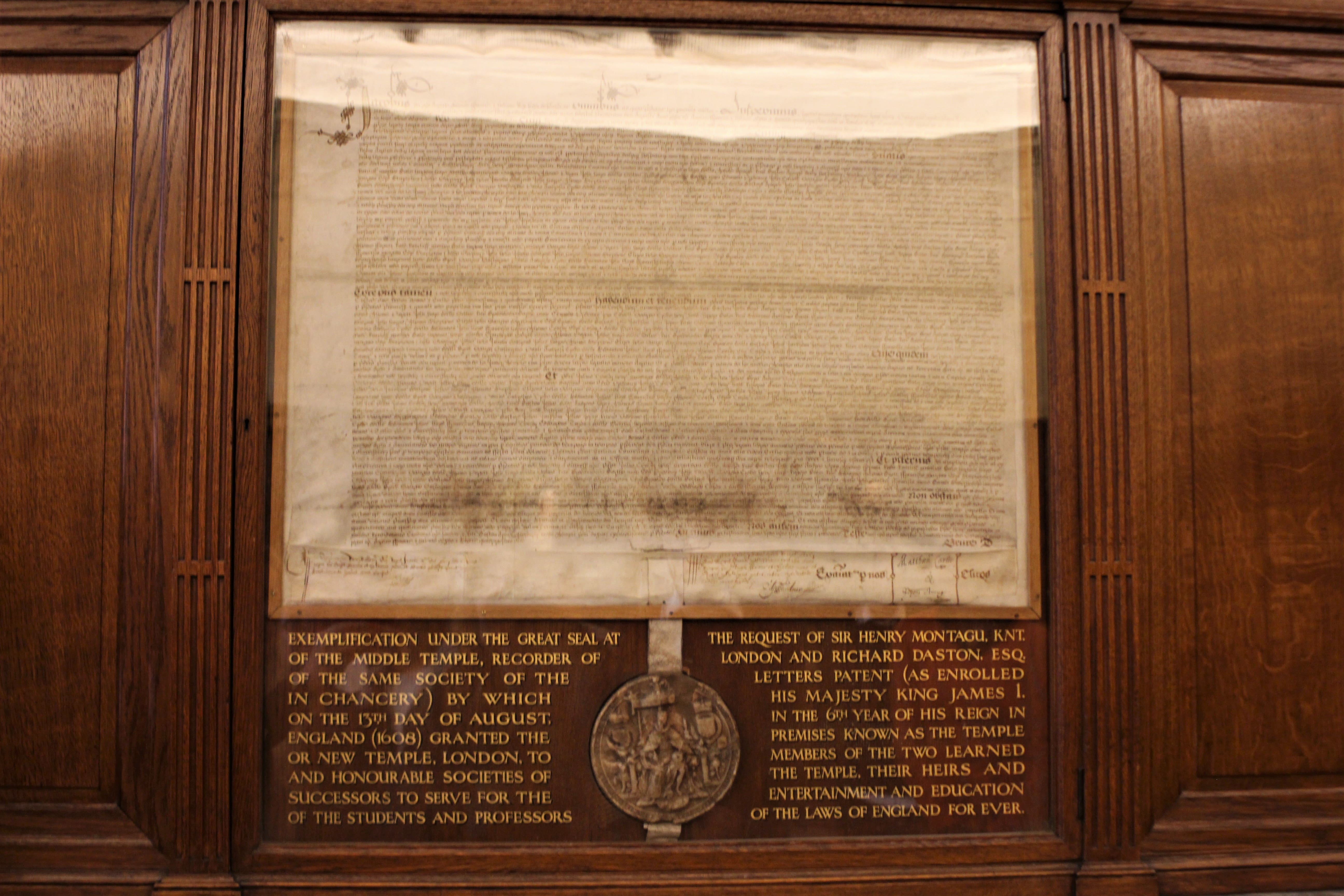 They did not report to the King in individual countries, so the Temple is like a state within a state. Henry Xlll became the owner of the land because the Pope no longer had jurisdiction in England. For the next 200 years, the lawyers who were by now firmly established, said they would like their land back. Finally, in 1608, they succeeded. The document applies to both Inns of Court – Middle Temple and Inner Temple (across the lane). It grants the land back on three conditions: maintenance of the Temple church; continue to use the buildings to practice law; the next generation of lawyers is educated. In the 18th century it became very lawless. People came through the gates and took refuge outside of the King’s jurisdiction. Over the centuries, agreements have been reached with the police, the City of London to pay taxes, city utilities – but it remains its own jurisdiction.

After an informative tour we settled into our seats at Tasker’s bar for a champagne tasting and lecture by Martin Gamman M.W., UK Director for Champagne Joseph Perrier.

Joseph Perrier Champagne was founded in 1825 and is one of the few Grande Marque champagne houses that remains privately owned. Its vineyards are situated in Epernay, in the Champagne region and its champagne is produced from the grapes of Pinot Noir, Chardonnay and Pinot Meunier. Joseph Perrier produces around three-quarters of a million bottles a year, a small part of the 300 million bottles produced annually in Champagne.  Relatives of Joseph Perrier were also involved in the production of champagne and those branches of the family eventually became the Laurent-Perrier and Perrier-Jouet champagne houses. Most of the champagne houses were founded between 1750 and 1850.

Stylistically, champagne is an appellation which involves a lot of rules. But the one aspect of production that is not regulated by the appellation is the blending of the grapes. The variations of percentages of grapes is where the variation in the champagnes develops.

We tasted four different champagnes out of the nine that Joseph Perrier produces, each quite distinctly individual and covering over 90% of the styles of champagne. We began with Non-Vintage Brut, an aperitif style champagne, light, fresh and fruity. It is aged for at least three years. The Non-Vintage Brut is a combination of Chardonnay, Pinot Noir, Pinot Meunier -two thirds red grapes and one-third white grapes. Most champagne sold in the UK is Non-Vintage Brut. The second was a Blanc de Blancs made from 100% Chardonnay, the only white grape in Champagne. It has more citrus character and a pronounced acidity and is crisper and less fruity than the Pinot noir in the Non-Vintage Brut.  It was my favourite of the tasting. It goes well with fish that has been prepared with butter and lemon.  Our lecturer pointed out that it is about as far as one can get from the big buttery Australian Chardonnay still wines that came onto the market in the 1990s.

Thirdly, we tasted a Rosé. This is the most variable style between the champagne houses and is also the most variable from year to year of the non-vintage selection. This is because the winemakers are trying to produce good champagne as well as a good colour. It is blended and then fermented for four years in the bottle. Because the Joseph Perrier vineyards are mostly Pinot Noir, they make a Rosé that is 70% Pinot Noir, 25% Chardonnay and 5% Pinot Meunier. Our lecturer compared it with the taste of an English summer pudding without the added sugar. It goes well with ham hock terrine, carpaccio, pink lamb – any dish with sweetness either in the food or from caramelisation in the cooking. The acidity in the Champagne cuts through the richness in the food. We completed the tasting with a Vintage champagne which was the most intense of the four, champagne with gravitas for a special occasion. Joseph Perrier only makes Vintage champagne in the better climactic years.  Grapes from only one specific year are blended to make this champagne.  Hence, it is a selection of better wines from better years. The Vintage champagne, which has fewer bubbles and more colour, has a toasty, biscuit character, a savoury note on the nose with the fruity Joseph Perrier style on the palate. This goes very well with a main course like guinea fowl with girolles sauce.

A selection of delicious canapes –  including scallops with caviar, foie gras, miniature cones with ricotta and asparagus, and beetroot with elderflower pearl – followed the tasting by which time we were all very relaxed. On a fine summer’s evening, a glass or two of one of these delicious champagnes with a platter of cheese will make a fine end to the week in a calm courtyard where the bubbles from the fountain perfectly match those in the champagne flute.

The Champagne Bar at Middle Temple is open on Thursdays and Fridays from 5 – 9 pm throughout May, June and July, weather permitting.

It is open to over 18’s only and is open to the general public. Champagne is available by the glass, bottle or magnum along with a selection of sharing platters and cheese. Entry is free. Card payments only.

Madeleine is a freelance journalist and writer for print and digital media. She focuses mainly on food and travel but with a lifelong love of the arts – especially visual arts, theatre and literature – she enjoys writing reviews for London Unattached. Madeleine has lived half her life in South Africa and the other in London which has widened her experiences of multiple cultures, languages and cuisines. Having grown up in a time when travel was restricted to local holidays, she has spent her adult life fulfilling a desire to see the world. She is a die-hard Francophile – speaking French helps tremendously – but put her anywhere and she is happy. Long haul destinations on the bucket list include China and Japan.