Things to do in Penzance, West Cornwall:

The historic town of Penzance is an ideal base from which to explore West Cornwall, an area of outstanding beauty, with fishing ports, sandy coves, gardens, old tin mines and the Minack Theatre.  Here are a few of the things you shouldn’t miss on a visit to Penzance and West Cornwall.

Things to see in Penzance.

It is far too easy when you visit a beautiful part of the world like Cornwall to forget to explore the towns and head for the sea or the countryside.  But, there’s plenty to do in Penzance and the town has a unique character with the stunning view of St Michael’s Mount rising out of the water in Mounts Bay. With a wealth of charming independent pubs and restaurants serving fresh seafood, Penzance is also a great place to visit if you like food.

The Turks Head Inn in Chapel Street close to where I was staying at the Chapel House Hotel was built around 1233 and is one of Penzance’s oldest buildings.

Chapel Street itself gets its name from the Chapel of St Anthony, which no longer exists – and most of the street dates back to the mid 18th century.  Maria Bramwell (mother of the Bronte sisters) lived at no. 25 and you might remember the Admiral Benbow pub as Jim’s father’s inn from the opening lines of Treasure Island. And, you’ll find Penzance’s most extravagant building, The Egyptian House which was built in 1812, designed by John Foulston for mineralogist John Lavin and is meant to be a replica of Temple of Hat-hor at Dendra in Egypt

West Cornwall has always been popular with artists who were traditionally drawn here by the spectacular scenery, today it still hosts a thriving artistic community.  Penzance itself has several small art galleries along the central streets, with the larger Penlee House Gallery exhibiting art from the internationally recognised  Newlyn school of art.

Penzance is a good base if you fancy a trip to the Isles of Scilly, either for the day or for an overnight stay.  From Penzance, you can take the leisurely option and travel by boat to the Isles of Scilly or take the Skybus which flies there from Exeter, Newquay and Land’s End airports.  There’s a shuttle bus from Penzance station to the airport at Land’s End if you prefer to fly.  It’s only a 15 minute flight from Land’s End to the Scilly Isles and you’ll be taking a tiny eight seater or 16 seater plane, so it’s an adventure in its own right.

The Scillonian III Passenger Ferry sets sail from Penzance harbour with the journey each way taking around three hours.  While it’s not far, the waters are very shallow in places and the Passenger Ferry has to travel slowly to avoid being grounded.

A destination pub for food lovers, if you are looking to visit the Tolcarne Inn then do book in advance. I was fortunate to have a reservation for supper as it is very popular with both tourists and locals. This whitewashed stone pub is a twenty-minute walk along the Western Promenade from Penzance, nestling within the seawall just before Newlyn. This historic fishing port is one of the biggest in the country, second only to Peterhead in Scotland, with more than one hundred ships based here. Fresh fish and shellfish from here are transported to the markets in London and the South East as well as, of course, the local market. Cornwall is home to famous fish restaurants such as Restaurant Nathan Outlaw and Rick Stein’s Seafood Restaurant to name a few.

Given its proximity to Newlyn, the menu at the Tolcarne Inn is heavily fish based with a chalkboard featuring dishes made from fresh fish straight from the market together with locally sourced seasonal produce. The sun was slowly setting as I made my way along the promenade from Penzance. The Tolcarne Inn is a typical Cornish pub and very cosy, something I appreciated as the wind was picking up; a storm was blowing inland from the west.

It would be churlish not to share some of the delicious seafood I tried.  To start, seared scallops with peas, pancetta, lettuce and mascarpone followed by fillet of cod with mussel and broad bean risotto and salsa verde. The scallops were succulent and tasty, the cod cooked to perfection. A  glass of Sauvignon Blanc Riviera was a great accompaniment to the meal.

For dessert, the vanilla pannacotta with strawberries and homemade shortbread. Chef and owner Ben Tunnicliffe came out of the kitchen as I was finishing my meal to greet guests.  His passion for the area and making the best of the high quality of produce available locally was evident.

The walk back from the Tolcarne Inn to Penzance was a great way to get a little exercise after a hearty dinner.  An exhilarating experience, by then the wind was blowing strongly and the sea was crashing over the sea wall. For me, one of the best things to do in Penzance is just to walk and watch nature at its best.

The climate in Cornwall is moist and warmer all year round than the rest of the country so it is ideally suited for growing exotic plants which wouldn’t survive harsh winters.  As a result, Penzance has plenty of things to do for keen gardeners and horticulturalists.  The following morning I set off for Tremenheere Sculpture Gardens, a few miles from Penzance. I’ve already been to the Lost Gardens of Heligan near Fowey but it was a first for Tremenheere.

Set in a sheltered valley Tremenheere Sculpture Gardens make the most of the climate with a mixture of natural woodland, tree ferns and other sub-tropical, luxuriant vegetation.

Internationally renowned artists such as James Turrell RA and David Nash RA have permanent works created specifically for the site. The sculptures are cleverly sited in the surroundings as if they have always been there. Winding tracks lead through the garden with seating where you can take the time to relax and soak in the atmosphere.

From the highest point of the gardens, there is a stunning view down towards the bay with St Michael’s Mount ever present. As an art lover and keen gardener,I really enjoyed strolling around the gardens, a great way to spend the morning. 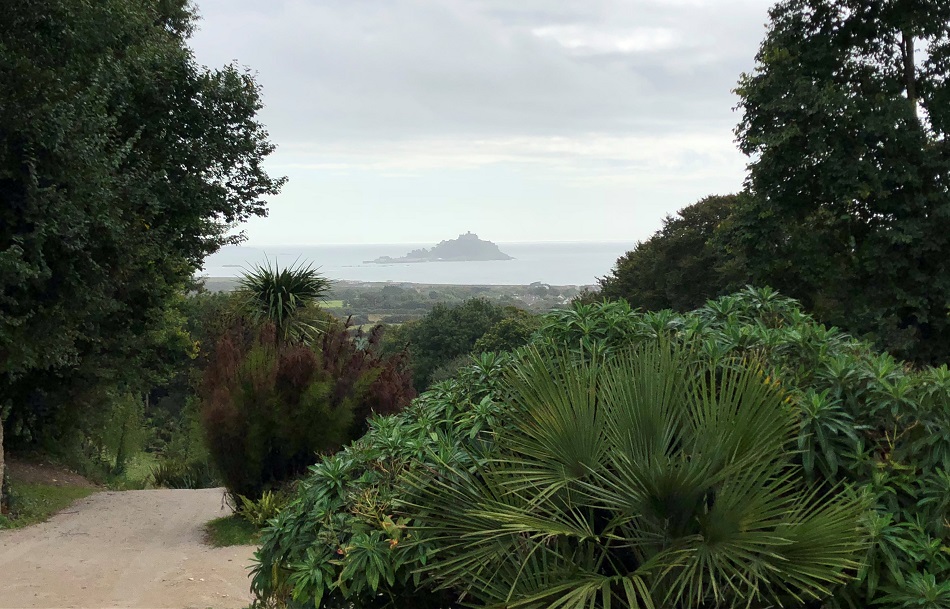 There’s a large cafe, Tremenheere Kitchen,  near the entrance to the gardens where you can buy refreshments after your visit, it was fully booked on the day I visited so making a reservation when you first arrive would be a good idea.  Works from the Newlyn School of Art are displayed in the gallery which is close to the car park.

From Tremenheere I drove towards Marazion to have a light lunch at the Mount Haven Hotel. This nineteen room boutique hotel has tremendous views of Mounts Bay from its elevated position above the town. In good weather, you can sit on the terrace and enjoy the stunning scenery.

One of my personal favourites on the lunch menu, a crab sandwich, was the obvious choice for me. It came packed with succulent crabmeat, with a side of brown crab mayonnaise and a salad. A perfect way to end my short visit to West Cornwall exploring things to do in Penzance and the surrounding area.

Other things to see and do in and around Penzance.

Useful Links if you are visiting Penzance.

For more details on Tolcarne Inn www.tolcarneinn.co.uk, telephone 01736 363074. Booking in advance is advisable as the Tolcarne Inn is very popular.

For more information on the Tremenheere Sculpture Gardens together with opening times visit www.tremenheere.co.uk.

I stayed at Chapel House Hotel – read my full review and find out more about this charming Cornish boutique hotel.

For tourist information and more about what to do in Penzance visit www.purelypenzance.co.uk.

You can travel to Penzance by road or rail.  There’s a recently refurbished Cornish Night Riviera service which leaves Paddington Station at around midnight and arrives in Penzance first thing in the morning.

Thinking of visiting yourself?  Why not pin this post for later

With a background in marketing, Kay lives in Surrey and is the owner of a self-catering holiday cottage in Boscastle, North Cornwall an area she grew up in and loves to visit whenever possible. She has a passion for skiing and the mountains and has spent the last two winters working as a ski rep in the Alps. When not in the mountains or the West Country Kay loves to travel, and experience new things.