Last year’s travels with my God Daughter took us to Barcelona.  This year a trip to play at being Princesses, staying in a real castle. 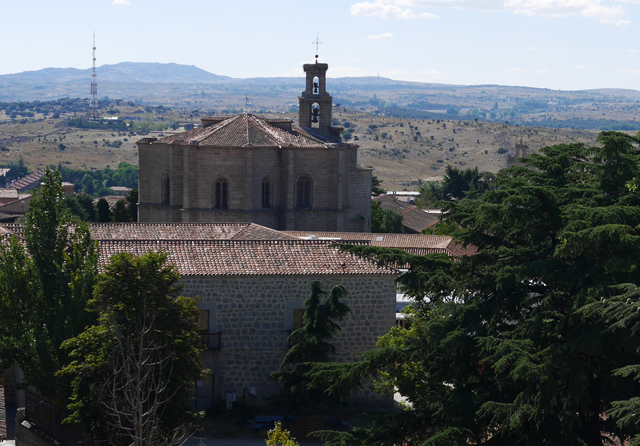 Where better to go than along the borders of Spain and Portugal, where both countries are scattered liberally with castles originally built to protect the territories from each other and from Moorish invaders?

I wanted to revisit Salamanca with my God Daughter – her language studies mean she needs to find a University for a year overseas and at the moment she’s favouring Spain over the alternatives of France or Italy.  This trip was not entirely altruistic on my part though, I remember this part of Spain fondly and would love an excuse to spend a little more time exploring.  And how else to inspire someone other than take them there?

The downside was that I had to drive.  And that my God Daughter who has a lack of sense of direction almost as magnificent as my own had to manage the Sat Nav.  I’d plotted the route to our final destination just outside Salamanca and printed it out.  But that really didn’t seem to help getting out of Madrid itself and I’m grateful that the Fiat 500 we’ve hired was simple to drive (and that I paid for collision waiver – as ever-so-occasionally I forgot which side of the road to drive).  It made the trip into an adventure from the start with Avila our first stop, once we manage to get out of Madrid

Hungry, we found the first cafe on the outskirts of town and joined a multitude of Spanish families enjoying their Sunday lunch.  We ordered.  Far too much food (this becomes a recurring theme), and wait for the dishes to arrive.  For once I didn’t take pictures of the food.  I’ve discovered that I return home with a whole portfolio of plates of food that are seldom used.  And, now, of course, I’m regretting not taking a shot of the Patatas Revolconas, which we ordered without any idea what to expect.  For those who might be considering the dish, typical of Avila and Salamanca, you’ll be served a portion of paprika laced mashed potato, seasoned with garlic and olive oil and topped with crisp pork belly cubes.  It probably wasn’t the best choice for my nearly vegetarian God Daughter, though I can imagine on a cold winter’s night it would be great comfort food.

Walking to the historic centre, I felt just a little apprehensive.  Magical places that I’ve visited before sometimes lose their magic on a return visit.  Not so Avila though, it is still for me, as  Castillian writer José Martínez Ruiz  claims “perhaps the most 16th-century town in Spain”.   It is a Unesco Heritage Site, perhaps best known for its walls – started in 1090 and completed some three hundred years later.

If you want to play at being a princess this is an excellent place to start.  While there are stretches of walls that have not yet been restored, there’s a sizeable portion that you can walk around.  And for me, the magic of being up in the ramparts, looking out across the Castillian hills or to the medieval town hasn’t gone.

Of course, there’s more to see – both within the town and from the walls.

We arrived at the historic centre via the Basilica de San Vincente – a magnificent Gothic/Romanesque construction that I was pleased to find as a marker for our route back to the car.  Once on the walls, it’s easier to appreciate the fine architecture of this building which from the street was just a little over-imposing for me.

I preferred the Cathedral though, built from the same grey granite as the walls of Avila.

And I seem to have developed something of a fascination with the lions outside.  I have a portrait of each and every one…

But of course, it’s the walk along the ramparts of the walls that is most memorable.  With a perimeter of some 2,516 meters, including 88 semicircular towers, this is the largest fully illuminated monument in the world.  It’s possible to walk around about half of the wall, though not everywhere is open to the public even now, despite extensive restoration. The walls have an average breadth of 3 metres and an average height of 12 metres. There are nine gates completed over several different periods and the Cathedral itself forms one of the towers of the walls.

Perfect for those who want to play at being Princesses, even if it is just for a few hours.