When a trip to Canada was mentioned and the possibility of visiting Quebec City, perhaps taking part in a few winter activities, I jumped at the chance. I was particularly intrigued by the trip because though it is translated as canoeing, the Circuit Quebecois de Canot a Glace race, held as part of the Quebec City Winter Carnival, is actually ice rowing….and I row.

Quebec City does not have a direct flight to it as yet, though currently the airport is being upgraded to allow international flights to land. Thus, we flew from Heathrow to Toronto and then took a small aircraft to the Jean Lesage International Airport, just 8 miles outside of the city. 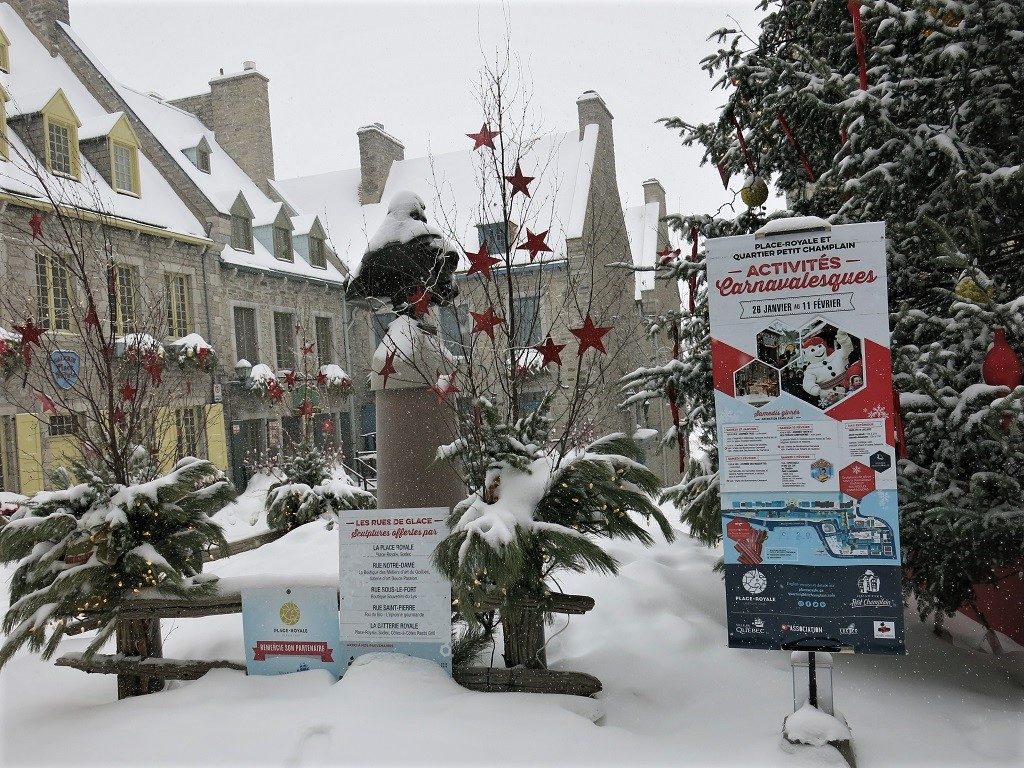 A quick taxi ride and we were at the door of Auberge Saint Antoine, where we were warmly welcomed. This is a unique boutique hotel,  a ‘live-in’ museum, with displays under glass in the hallways and in the rooms.  There is even a British cannonball displayed where it landed during one of the many sieges of the city, in the wall of the original building. The rooms give the ambience of a suite, and the comfort of a homestay, with their own fireplace and huge bathtubs. There is also a fully equipped gym with two running machines and an ergo, so if you’re in the city on business you can still train without having to face the cold and the snow, though people do still ‘jog’ outside on the pavements. From my balcony, which faced the Museum of Civilisation, I could see the river in one direction, and the old city in the other.

Quebec literally means where the river narrows and was a strategic point on the Saint Lawrence river in the 18th century, where it changed hands from French & Catholic to English & Protestant, and back to French. The centre of the city is built on two levels hugging a steep rock outcrop, with some of the older architecture similar to that found around the world where there has been British influence.

There are dominant buildings in the heart of the city, visible for several kilometres along the river, many being impressive parliamentary buildings, but in the rebuilt old quarter there is a strong French accent to the churches and surrounding buildings, built of local stone.

There is one bridge, 7km downstream, and a ferry daily breaking through the ice into the heart of Quebec City from Levis on the southern bank. Quebecois boast that the city is the safest in North America and it is one of only 3 UNESCO Heritage cities. It is a destination easily walked around and a funicular means that the walk from lower to upper levels can be sidestepped.

The Carnaval de Quebec runs over three weeks, with events ranging from international snow sculpture to a lumberjack challenge. In a city where 40,000 students come to study you might think it would be a little more alcohol-fuelled than it is, but it has a calm fun atmosphere about it making it fun for all generations. The central area is spread around the Assemblee Nationale inside the original fortified walls of the citadel. Given the temperature averaged around -25C it felt surprisingly comfortable to walk around and enjoy being part of the crowd, all sporting the effigy of Bonhomme.

Carnaval would not be the event it is without the character that is Bonhomme.

Spot Bonhomme in the background popping up with his red hat and big smile.

One of the attractions that would be highly recommended is the toboggan run – a 70-year-old chute starting from the highest point in the central city area that gives views over the river though you won’t see much as you race down at up to 40kph. Be warned you will have to get very close to your fellow travellers for this ride, with up to 4 people per sledge!

The highlight of the middle weekend of the Carnaval is the Course en Canot, the ice canoe (but really rowing) race. The sport is unique to the Québec region with a series of seven races, being held in Toronto, Windsor, Montreal, Gatineau, Trois-Rivières, Chicoutimi, Isle-aux-Coudres and of course Quebec, between December and March. The actual start of the race season is dependent on the weather as climate change has affected the ice flow. This year racing started on January 20th. It is considered one of the toughest races in the world, not just because of the temperature but also because of the skill in navigating through and over the ice on a river with stream and, in the case of the Quebec City stretch, tide – victory was snatched from the leaders last year by a boat that decided to go row round an ice flow rather than drag the boat over it.

The first ice boat race was held in 1894. Between 1894 and 1955, there were several intermittent races between Quebec City and Levis, i.e. North and South banks, but since 1955, the race has been a core part of the carnival calendar. It is the most important competition in the race calendar because of the conditions and the type of ice formed at this point in the river, and originally only men could compete. ‎The first women’s team competed in 1966, as part of the men’s race, but today there is a dedicated elite women’s class and from the video, you can see women racing with men in the competition class.

The boats are wide canoe boats with no outriggers but gates in the shoulders of the boat, which hold the blades, made of aluminium and using a unique rubber ‘spring’. The hull is waxed like skis, with a layer being melted and polished onto it before the race. The blades used in the boats are similar to those used in rowing and sculling around the globe – you will see similar blades used in the Oxford and Cambridge Boatraces – but the steers’ person uses a kayak blade to guide the boat in the direction he or she deems the best path to take.

The boats are lined up, on solid ice in the basin in front of the paper mill, according to the points achieved in previous races in the series. The start is a mass start, with the start being signalled by four rifles and the obligatory wave from Bonhomme (his physical presence gets around the carnival a lot!). The initial boat moving technique involves ‘trottling’ (trottinette) – running very fast pushing the boat over the ice and then putting one leg in the boat as the ice gets thinner and the boat is needed to support your body weight. At this point, the ice and water are mixing beneath you and your feet are effectively in the river. If you don’t get in the boat at the right moment and put your carbon blade in the oarlock, you swim.

The Elite men and the Competition class have to do three laps across the river with the point of turning defined by two buoys, one on either bank. The Elite women and Sport do two laps but do more ice running in and out of the start basin. There is a time limit on the race, and often a canoe can be seen on a rescue ship, whilst the athletes sit in the bridge warming up. This is not a race for the faint-hearted. At the end of the day you see cars with trailors packed and ready to head home, or onto the next city to race.

Even if you are not a rower this race is a brilliant event to watch and all generations can enjoy something during the 17 days over which the Carnaval runs, with over 200 activities and two, night parades, The Charlesbourg parade and the Upper Town Parade.

Next year will be the 65th anniversary of the Carnaval de Quebec, running from February 1 to 17, 2019 with the Canoe race on February 10th. A perfect winter holiday destination that caters for all the family and will leave you with lifelong memories.

Next, I’ll be heading almost directly north out of Quebec City on the 175 passing through the Parc National de la Jaques-Cartier to Saguenay. Read on to find out more about winter snow sports in this vast region centred around Lac Saint-Jean and importantly what to wear when temperatures can reach -30.