The Riviera Nayarit region is one of the newest and most modern beach destinations in Mexico, yet its main attractions still encompass diverse vegetation, rivers, lagoons and mountains. Activities include birdwatching, sports fishing, diving, golf, surfing as well as just enjoying the food and the sun. So having only two days to tour the area was never going to be enough to do more than just get a feel for the region. But a few areas were chosen of special interest and we were eager to start.

So we headed out, North from Nuevo Vallarta on the route mex200 to Tepic.

The Mexican roads are really well maintained and pretty much empty. We could have travelled faster if we hadn’t kept asking to stop for pictures, however, the lush greenery really had to be seen to be believed.

The route takes you through the winding mountains of the area and is really the only way to get between the towns in the valleys. Along each bend in the road, there are prayer points, ranging from a small stone statue of Jesus or the Virgin Mary, through to massive stone arches framing the sacred point. All are well maintained, all are lit with burning candles.

Tepic is the capital and largest city in the Mexican state of Riviera Nayarit and is located in the central part of the state at about 3000ft above sea level. This altitude makes it a rich area for agriculture, and major crops include sugar cane, citrus fruits and tobacco. As a major town, it also has large processing factories for these crops, and the roads fill up with trucks overloaded with raw sugar cane heading for processing. This area supplies the majority of its sugar to the Mexican Coca-Cola factory.

The town is bustling, even on a Sunday, with people going in and out of the main Church, or just chatting and playing in the town square. Everything is pristine, the pavements swept clean by shopkeepers whose stores open directly onto them. Not being a tourist town, we were viewed as just extra customers for the bar or iced smoothie store and left completely unhassled. It felt great to just roam about like a local.

Leaving Tepic, we head North again and pass through Santiago de Compostela. Compostela is the name of both a municipality and the town within that municipality that serves as the seat. This name was given in honour of Santiago de Compostela of Galicia Spain. The word Compostela is from the Latin ‘campus stellae’, meaning ‘field of stars’. A purely agricultural town in the middle of flat plains, major crops are tobacco, corn, beans, coffee, sorghum and mangoes.

Driving along we pass through fields of fresh growing tobacco, interspersed with hanging drying lines. The aroma of fresh tobacco is everywhere.

The Isla Mexcaltitan, known throughout Mexico as just Mexcaltitan is a small man-made island-city off the coast of Santiago Ixcuintla region of Riviera Nayarit. Legend has it that it was the Aztlan of the Aztecs, their home city and birthplace, from where they set out on their pilgrimage in 1091 that led them to found Tenochtitlan (now Mexico City) 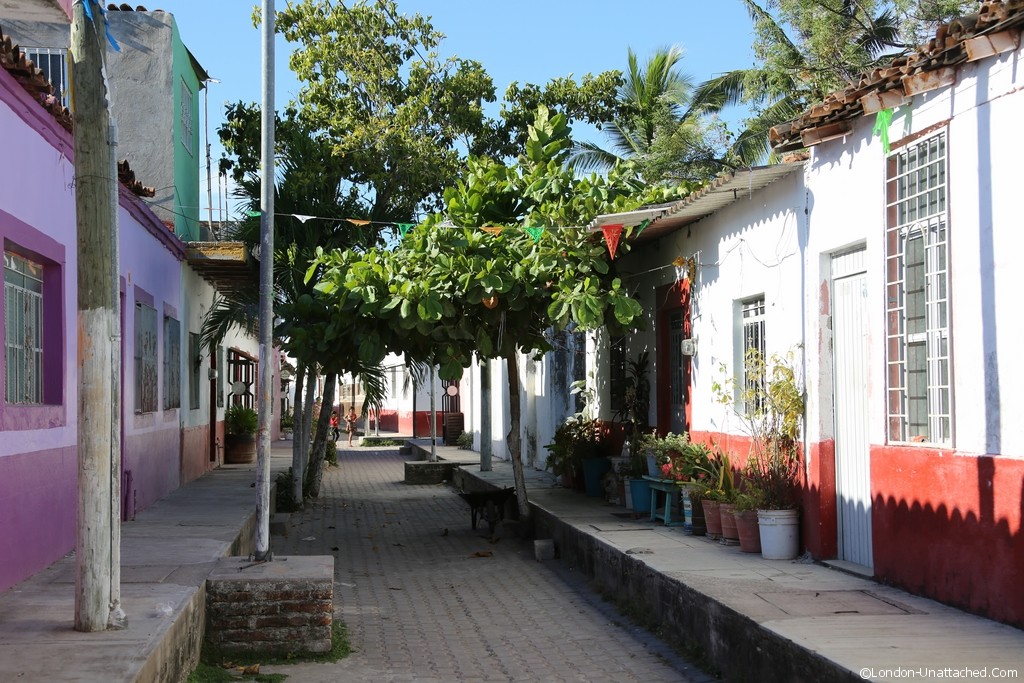 The streets crisscross the circular Island, and the houses sit up high, with lowered paths acting as streets. At high water times of the year, or with severe storms, the street floods and are travelled by boat. We were lucky that there had been no flooding in a while, so everything was clean and people were moving about normally.

In the middle of the island sits the main Church, town hall and the museum Museo El Origen on the smallest plaza you could ever find.

The museum is small, and information only in Mexican, but our guide explained the artefacts on show. He explained the beliefs of the time, and how the artefacts discovered showed how the Aztlan had developed here before dispatching of groups of them in pilgrimage to find a new home city. The legend states that they would find a new home when they ‘saw the eagle eating a snake’. This symbol is found throughout the region and on excavations from the island.

Although it is clearly a tourist destination, it is still a living town, with people earning a living from fishing, agriculture and, of course, tourism. There is even a small school, although the population is dwindling.

Just across from the Isla Mexcaltitan is Restaurant Kika, looking more like a shack than a top dining venue, located on its own little island. It specializes in shrimp and the freshwater fish of the area and can prepare dishes to a quality that will astound you and are hard to beat. Its speciality is Pescado Zarandeado (marinated snapper smoked with the regional lemon mangrove coals), shrimp tortillas, meatballs and pate. You can watch it all being made fresh in front of you, or sit back with a cold beer and enjoy the calmness of the island view.

We catch a boat back and enjoy the tranquillity of the location and the wide open water bordered by mangroves. As with many areas of the Riviera Nayarit, this is a prime bird watching location, and thousands of little beaks and eyes follow our boat moving slowly upriver back to the wharf.

It has been a full day, but worth every second. It is only our second day in Mexico, and already our expectations have been blown away, and the feeling of closeness to nature and a calming pace of life is starting to permeate our souls.

As the sun goes down, we head south to San Blas and our Hotel for the night.

Simon is a keen traveller and photographer with a particular interest in wine and spirits. He's travelled recently to Burgundy, Qatar, Mexico and Romania and enjoys exploring less well known and off the beaten track destinations. He's even visited the Space Port of Mos Espa and the Juntland Wastes - in Tunisia. He's happy to travel by himself or with a small group. Like everyone involved with London-Unattached Simon enjoys dining out. He's managed to eat an entire Tomahawk steak by himself - but is just as happy nibbling on some sushi or sashimi. All washed down with matching wine.