Two Legends of Pardubice – and why you should visit!

RyanAir has just opened a new route direct from London Stansted to Pardubice so if you are planning to visit the Czech Republic it is now very easy to reach and still much cheaper than Prague both for hotels and food.

While accommodation choices may be limited at the moment, there are still some excellent options.  You can stay in a good quality three-star hotel like Hotel100, right in the town centre yet blissfully peaceful for around £45 a night – and the top hotels, originally built to cater for the Russian market, will set you back less than £80 a night for example at the spa hotel  at Kunětická Hora Golf Course.

I was particularly impressed by my spacious and very well equipped room at Hotel100, the excellent breakfast, pretty terrace and Italian/Czech restaurant where I enjoyed my first bowl of garlic soup!

We discovered that Pardubice makes a good base for exploring the Czech Republic thanks to a comprehensive and good value rail network.  For example, a train to Prague will cost you around 4 Euros and takes less than an hour.  Apart from Prague, you can travel across the country quickly and cheaply, using Pardubice as a starting point.  But, the tiny historic city has a lot to offer in its own right so be sure to spend some time there exploring.

Although there are a few earlier records of a settlement at Pardubice, the city really came into its own during the 14th Century, when the Lords of Pernštejn became rulers of the region.  It was under their influence that the city flourished – the ‘half horse’ is part of the coat of arms of Pernštejn and is still the City’s emblem. Of course, there’s a story – that Bohemiam King Vladislav II was trying to conquer Milan.  During one of the battles, as the last of the warriors, Jesek was fleeing the city, the portcullis was released and his horse was cut in two.  It continued for a while, but eventually was unable to carry Jesek any further.  Instead of leaving his faithful horse,  Jesek picked it up and carried it to the camp of King Vladislav II where he was given the front half of the horse as his coat of arms as a reward for his bravery.

The city has a striking and well-conserved centre, based around the town square with many of the beautiful baroque and renaissance buildings still standing.  The Town Hall though, the largest of the buildings is a 19th-century addition. 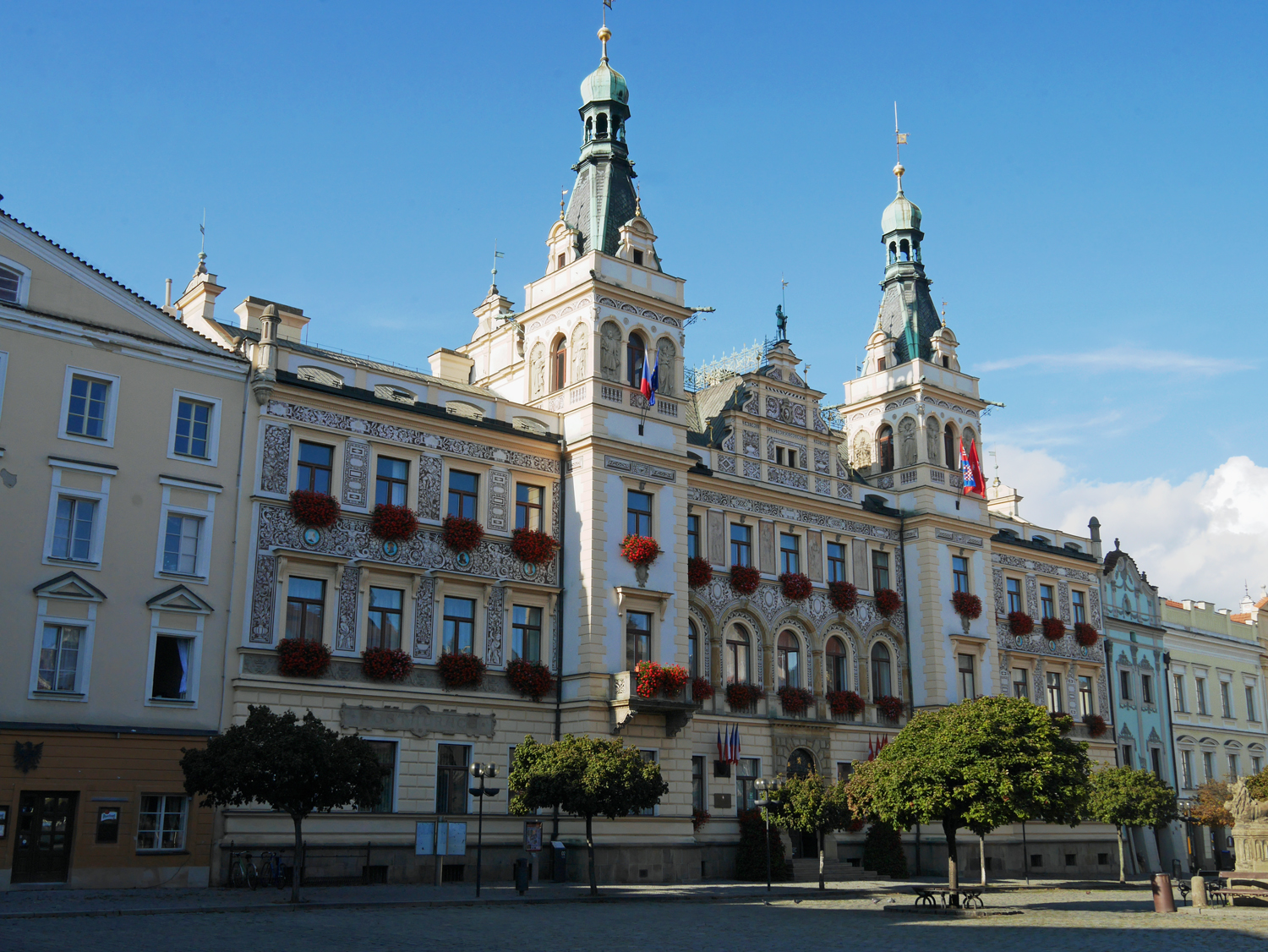 The early Renaissance Green Gate is one of two original gates extended and transformed like much of the city after a massive fire hit Pardubice in 1538.

At that time the buildings were transformed in Renaissance style, with the addition of an extra storey to many of the houses and towers, terra cotta lining, portals and arch gables which can still be seen today in the houses around the town square and on the road leading to the castle.

At that time, the castle was also adapted to the Renaissance style – you can still see some of the stunning frescos in the interior.

You’ll see stone plaques depicting the second legend all through the City.

The Pernštejn coat of arms also includes a bison’s head with a ring in its nose, on a silver or gold shield and the legend behind this image is that Vojtěch, a poor Collier, was being burgled – food was being stolen from his home in the forest of Moravia. When he discovered that it was a wild Bison he grabbed the beast by the horns but then had no idea what to do next.  Luckily, a little bird nearby called out to him to use the bast (rope) that he had around his food as a shoe.  Vojtěch unwound the baste and used it to shove through the bison’s nostrils to make a loop.  He then dragged the bison to the castle and cut its head off!  For ridding the estate of this unwanted beast, Vojtěch was given a black bison’s head with a ring in its nose as a coat-of-arms and the forests in which he had previously burned wood coal to build a castle on.

The Pernštejns developed much of the infrastructure of Pardubice, including a network of prosperous lakes for fish.  But, they eventually ran out of funds and Jaroslav of Pernštejn sold it to King Ferdinand I in 1560 when it became the Imperial-Royal Chamber Estate.  But their influence can be seen throughout the city, not least in the brewery.  During the time of the Pernštejns, the City was famous for lagers – and these were distributed to a limited number of local public houses.  By 1650 there were two main breweries, the castle and the town brewery, which competed with each other.

Industrialisation in the 19th century, lead to increased demand and the town brewery was taken over by the Pardubice brewery – extending and modernising the old buildings in 1871.  By 1872, the new brewery was producing beer – mostly pale lagers.  But, then, in 1890 the Pardubice Brewery developed their own Porter – a dark beer which was the strongest bottle fermented beer in Europe.  Of course, it became very popular and won many prizes.

After a history of mixed state and private ownership, the Brewery remains under Czech ownership today and exports across the EU, to Russia, Israel and Canada. And, there are tours and tastings for members of the public – together with a traditional Czech restaurant where you can enjoy the beer along with dishes like local marinated cheese or beef goulash.  So, if your interest lies in modern day legends, make sure you visit and try the Porter – it’s quite a unique drink!

And, whether you are interested in Beer, Heritage, Horse Racing or just exploring a little-known part of the Czech Republic why not visit for yourself and find out more.

České dráhy (Czech Railways) or Regiojet take under an hour to Prague and cost approx. 3 pounds.

I stayed at Hotel 100 in the centre of Pardubice

I also checked out the golf resort and spa hotel on the outskirts of Pardubice at Kunětická Hora which is worth considering if you are looking for an out of town base.