One of the joys of travelling for me is seeing art ‘in situ’.  Not always in the homes, palaces and mansions that the work was intended for, but at least in the country where the work was created.  There is something quite special about the way light affects art.  I’m not enough of a specialist to really understand how it works, but it’s something I’ve noticed visiting places like Cuenca in Spain or Newquay in Cornwall where the light has really affected the type of work produced by artists in the area.  Sorolla, known as the Master of Light for his iridescent canvases, is an artist I knew little about.  The exhibition of works by Joaquín Sorolla y Bastida (1863–1923)  currently at The National Gallery is a good chance to discover more, albeit not in Spain, with the most complete exhibition of his paintings outside of his country.   And while I’d much prefer to have been in Spain the opportunity to try the paired menu and at least extend my enjoyment of this Spanish master with a delicious menu of Spanish food, seemed like a good compromise.

As if to bring a little Spanish light into our lives, both the The National Café and The National Dining Rooms at The National Gallery are offering a special set menu of Spanish food which we went along to review. Of course, indulging in a bottle of Cava may just have helped things along the way.  But, a set menu at £19 for two courses or £24 for three, right in the heart of London is an excellent deal!

There are three options on the menu for starters and mains and a couple of desserts.  There are also three rather fine sounding glasses of sherry at £5 each, though since we’d ordered some excellent Spanish Cava, we didn’t indulge in any further alcohol. 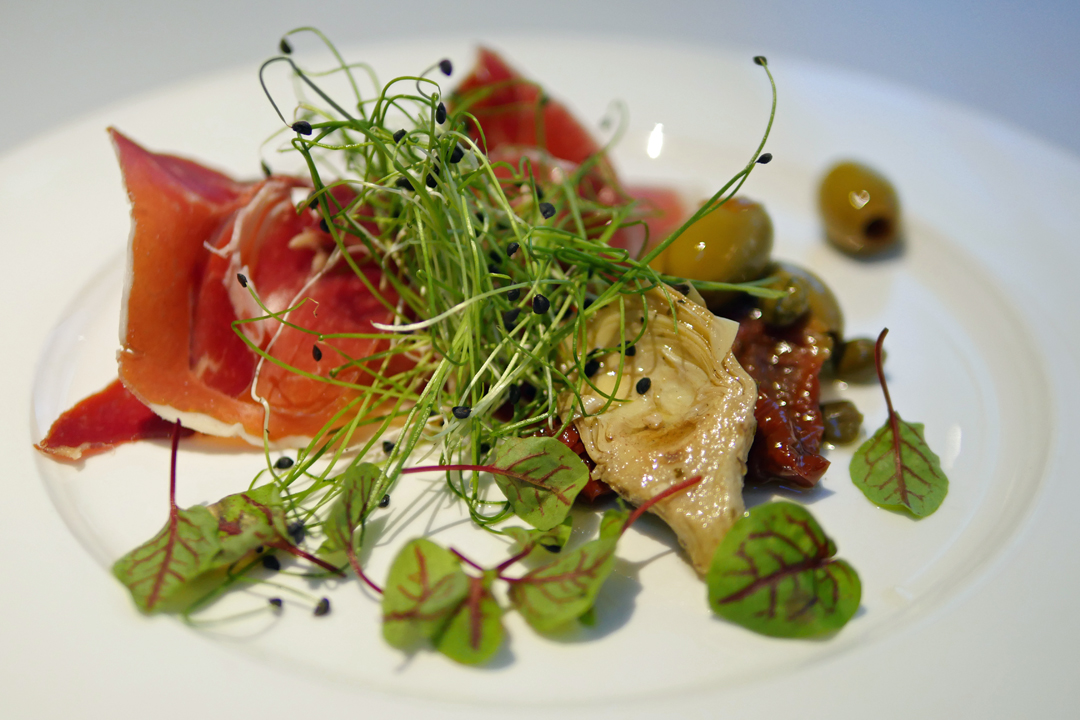 The smoked ham and Manchego croquettes with pimento aioli were tiny, crisp-coated and melting, just as they should be.  Truly delicious.

Blackened hake came with a Romesco sauce which our waiter told us included tomato but which I am convinced was an authentic almond and red pepper mixture and an almond and olive dressing.  The fish was perfectly cooked and the skin crisp and black.

Vegetable Paella was a comforting bowl of goodness that looked stunning which my companion told me was quite a substantial dish.

We tried both the desserts.  Crema Catelana was a deeper bowl than I’d have expected but still delicious.

The Tarta de Santiago, though, won our vote with a large dollop of clotted cream (not sure how Spanish that is) for good measure.

The exhibition itself, in the Sainsbury Wing, is one that you shouldn’t miss.  I was particularly impressed with the range of paintings, with the clear Spanish heritage showing influences of Velazquez and with elements of social realism that really drew the visitor into Spanish life at the turn of the 19th century.  It’s a well-planned exhibition and if like me, you knew little about Sorolla before you visit, you should leave understanding how this Master bridges Spanish art

The exhibition runs at The National Gallery until Sunday 7th July 2019.  Standard tickets cost from £14-£18 depending on whether you book online. The Gallery is open daily: 10am–6pm with a late night till 9pm on Friday

The National Cafe is open for rather longer hours