I’m a sucker for steam trains. Whether it’s Celia Johnson and Trevor Howard in Brief Encounter, Jenny Agutter crying out “Oh, my Daddy, my Daddy!” in The Railway Children or all-star versions of Murder on the Orient Express, it’s the sound, the steam and the almost animalistic character of that kinetic embodiment of coal, iron, wood and steel which brings romance and adventure into our lives.

So when I was asked to review the Spa Valley Railway’s Fish & Chip Supper it triggered my inner Trevor Howard and I drove out to Tunbridge Wells – just an hour and a bit from London – to find a great little railway with car parks nearby and within walking distance of Tunbridge Wells Mainline station.

We were to board the Spa Valley Railway train at Tunbridge Wells West station for a 5-mile ride out to Eridge. But first of all, we rooted around the station and the train yard with the resting locomotives evocatively framed by the smoke and the night sky. 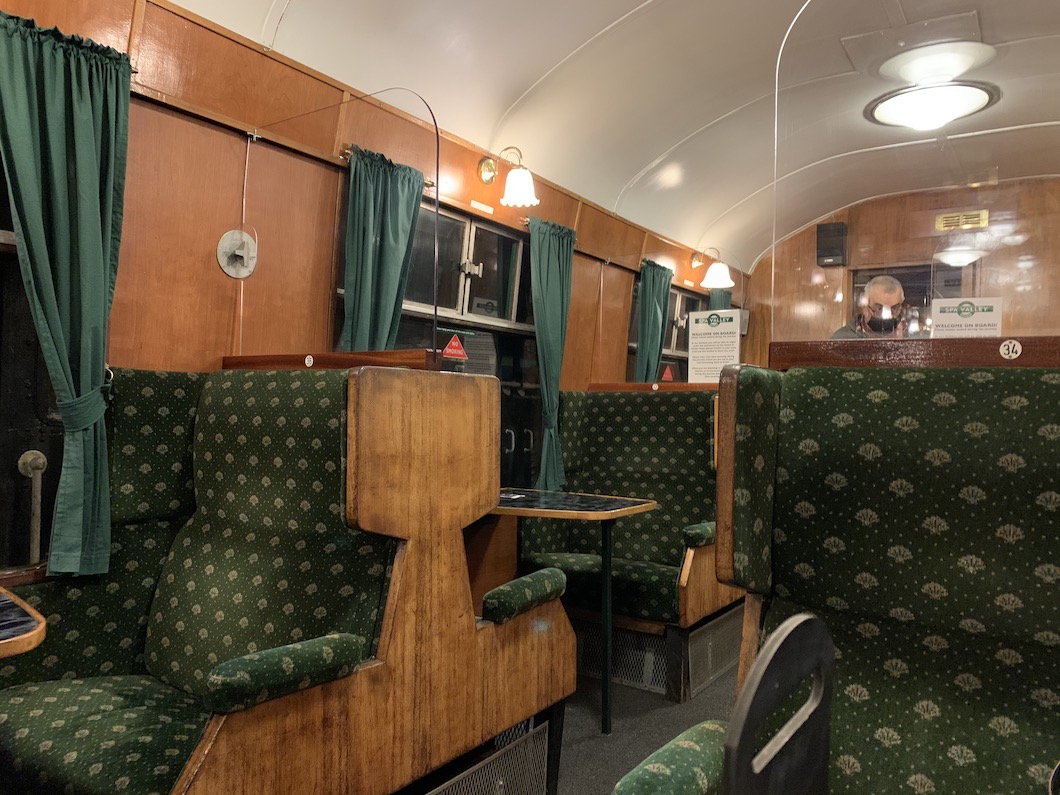 As 7 o clock beckoned we boarded our warm COVID Secure carriage decked out with properly upholstered seats and wooden and glass fittings. This really was a trip down memory lane with the added bonus of there being no smoking carriages!

The train was being hauled by the Battle of Britain Class Bulleid Pacific No. 34053 locomotive ‘Sir Keith Park’ and everyone cheered as the whistle blew and the train pulled out of the sidings. As an added bonus the staff are all cheery volunteers who dress the part and are full of fascinating information about the line and the locomotives.

There’s also wine, prosecco, cider and soft drinks available. Half of the train had signed up for the ‘Steam and Real Ale’ outing but we had chosen the ‘Fish & Chip Supper’ option and the fish and chips tasted and looked as if they had come from a proper fish and chip shop. Served in cardboard boxes the food was piping hot and just the job on a chilly evening.

We pulled into Eridge Station for a brief turnaround. It has been delightfully restored and added to the authenticity of the experience with Spa Valley Railway.

Sadly, Bernard Cribbins wasn’t there as station master but his understudy did a fine job. After a dessert of a light sponge cake with cream and strawberry jam, our 90-minute adventure drew to a close.

If you are a steam train buff, love the romance of old movies, or are just looking to do something new and fun then it’s really worth giving the Spa Valley Railway a try and especially at this time when they need our support.