I love truffles.  Black truffles that are used to make dishes special all year round.  And white truffles that I’ve only had once, shaved over gnocchi and served with fresh parmesan in a stunning restaurant in Dover Street.  But, I didn’t know very much about them until my most recent trip to Tuscany.

The San Miniato White Truffle Festival takes place each year over three weekends in November.  The town itself is full of beautifully preserved medieval buildings and even if the festival wasn’t in progress, it would be worth visiting.  Parking in the town is limited and we were directed down the hill to find somewhere to leave the car.  But, the walk up the hill rewarded us with a fabulous view of the town. 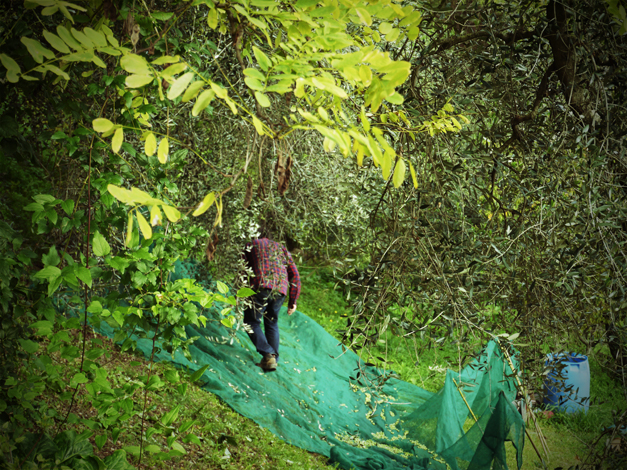 And, the olive harvest still in progress.

Different areas of the town are set up as centres for different food and drink interests.  The first marquee we found focussed on general Italian artisan foods.  I recognised many of the Sicilian specialities I’d been introduced to earlier this year including Pachino tomatoes, capers, caciocavallo cheese and tuna bottarga.  All beautifully displaced but totally unnecessary in my case because I managed to bring back enough from Sicily to last me for some time.

And, there was pecorino and ham and pork products of course.

Further into the town centre, we found men with fire!  Part of the festival, they were making a truffle hunter and his dog.  I suspect it was something that was planned to go on throughout the three weekends of the event, and since we were there on the first day, the tin man not only had no heart, he had no head, body or arms either!

Throughout the town, there were different groupings of foods with the local artisan producers surrounding the central stage that was to be used later that day for chef presentations. And, up some crumbling steps, close to the Duomo were the two areas we were most interested in.

Local winemakers – for three euros you were given a tasting glass and a small case to carry it, which you could hang around your neck.  With the glass, the winemakers would offer you tastes of any or all of their wines.  And, of course, with the taste of good wine, you might just buy!

In my case, I did buy a fabulous bottle of vin santo.  Or at least the vin santo that I liked best from those on offer.  Is it any good?  Well, I really don’t know, but at 15euro for a half bottle of a 2002 vintage, it seemed like a good idea. Maybe that was the effect of the wine tasting?  I’ll know when I open it. 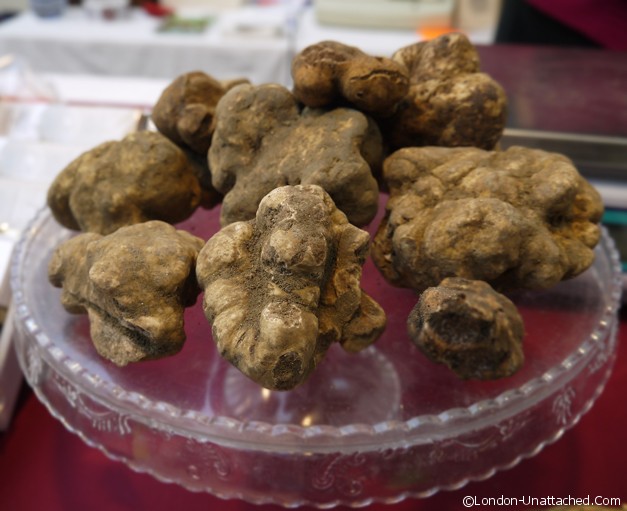 Next door to the wine was the focal point of the event.  A collection of perhaps, 10 or 12 local truffle suppliers.  They assured me the truffles were all collected locally.  Each of the plates of truffles was covered with a glass dome, which the sellers removed so that we could smell the truffles and, in my case attempt to take a decent photograph!

The larger truffles are more prized.  And, while it is possible to preserve black truffles, white truffles need to be eaten fresh.  One of our friends from Tuscany Now the people who provided us with a home for the week and who rent luxury villas in Tuscany told us that the local trick was to slice white truffle and freeze it between layers of butter.  But, it isn’t sold that way and we didn’t learn about that till after the festival.  So, instead of the fresh truffle, I bought white truffled lardo (!) and some white truffle pasta sauce.  Both of which I am really looking forward to trying.  As it happens my companion DID indulge in a truffle for our supper, which we ate shaved over gnocchi with just a little butter.  Very delicious but perhaps just a little hedonistic at 28euros for enough for 3 people!  To eat a white truffle, you simply rinse it quickly under cold water, then clean it with a soft brush and then shave it or grate it, over hot pasta and serve.  Black truffle needs to be cooked, usually gently fried in butter and can also be preserved.

After wine and truffles, what next?

Well, despite having sampled all sorts of things, we were a little hungry so wandered through the town, admiring some of the detailed architecture

And eventually found a new section of the festa – with the other sort of truffles!

What could be better?  Chocolate tasting to round the experience off nicely, followed by a few snacks – truffled fried egg toast for my companion and truffled polenta for myself.

We were tired by then, about 7 pm, and decided to leave.  But it was clear that the event was going on for some time and was going to get considerably livelier.  Music filled the streets, everywhere was lit up and there was a real buzz.

I hope my first Italian Festa isn’t my last.  There are events throughout Italy all year long.  Each tends to celebrate one particular product (mushrooms, wine, almonds, fish and so on)  and some are much smaller than the San Miniato White Truffle Festival.  But the smaller events are supposed to be more intimate and easier to get involved with.

With thanks to TuscanyNow, providers of villas in Tuscany for offering us the chance to visit Tuscany.  This trip was a prize for writing an article on why I wanted to visit Tuscany and I’m happy to say that many of the things I really wanted to try were realised this time.