Sundae Specials and More at the Colony Grill Room:

There’s something just a little old-fashioned about the idea of a Grill Room.  At the Beaumont Hotel, the latest venture from Corbin & King, I might have thought the Colony Grill Room had been there for thirty, forty years or more if I didn’t know the hotel opened just last year.  It’s a smart setting and an ageless style that exists in every large city in Europe and the USA.  Recently in Louisville I enjoyed dinner at the English Grill, The Brown Hotel, hesitating before asking for a reservation because I wanted to try local food.  In fact, it was every much a product of the USA as Proof on the Main where I dined the next night.  At the Colony Grill Room, there’s a definite American twist to the menu, though at least some of the food is sourced from the UK.  I hesitate to suggest it, but in many ways, it reminded me of the Savoy ‘before’.  The Beaumont even has an American bar.

Starting with cocktails and avoiding the ‘The Beaumont’ in some kind of worthy attempt to limit my intake of alcohol, I plumped instead for a classic Champagne Cocktail, which came served in a coupe.  Wouldn’t you have drink-envy though?  When The Beaumont arrived it was a longish drink of gin, dry sherry, elderflower, pineapple & lemon juices topped up with champagne.  It looked light, refreshing and utterly delicious. 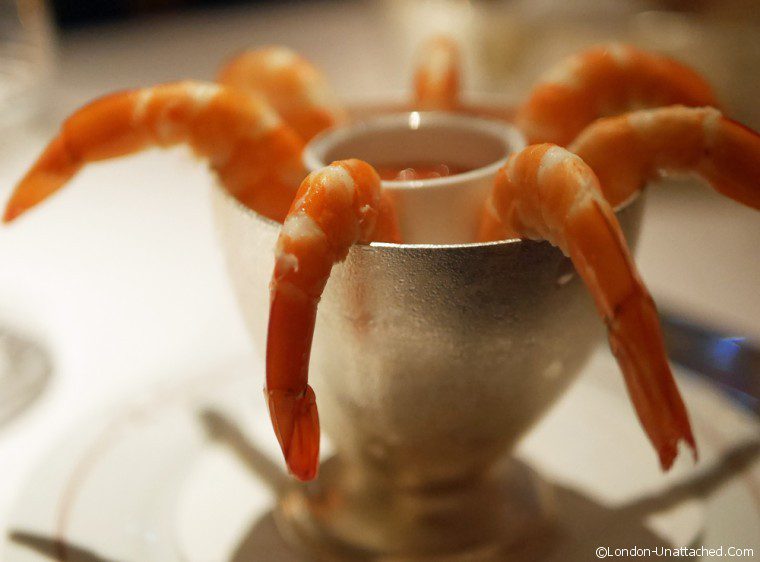 Everything here had a classic feel to it, from the polished silver bread bowl through to the white linen and leather banquettes.  New York Shrimp Cocktail, my choice of starter, was presented in an ice-filled bowl, with a spicy chilli and tabasco dipping sauce.  Simple yet delicious.  The tuna tartare looked delicious too and was pronounced excellent.

Keeping with the retro theme, I ordered a Dover sole for my main course.  Served here with Bearnaise, it might have been nice to have the option of a beurre noisette.  In the interest of table space, I opted to have my sole filleted for me, but then regretted the lack of photo opportunity.

No matter how wonderful a Dover sole tastes, it looks better when it is still in one piece. Especially when, as here, the only garnish is half a lemon.  No matter, it was a lovely, nutty and well-cooked dish which I enjoyed with steamed spinach.

Prize for the prettiest dish goes to the brill and samphire with clam vinaigrette enjoyed by one of my companions.

And for the tastiest, perhaps to the Strip Steak – a generous and apparently very tender portion of grass-fed Devon beef.

The menu has a curious mixture of dishes.  In addition to the mains, there’s a selection of ‘American sandwiches’ including Pastrami Reubens and a Lobster Roll.  I can imagine it’s something quite popular with hotel residents from across the pond – easy comfort food for the jet-lagged traveller.

On to dessert, my apple pie was a substantial, home-style portion which didn’t quite make it for me, with rather stodgy pastry and slightly undercooked apples.  Next time I’m definitely opting for the bespoke sundae, a wonderfully simple and charming idea, where you build your own dish and order on the back of a beermat style notepad.

There’s a well-balanced wine list, I drank Muscadet Sur Lie 2014, Domaine de la Pépière, Loire, France throughout the evening, a nice light and fresh accompaniment to my shrimps and Dover sole.  Prices for wine start at £22.50 a bottle and the food menu has a reasonable selection of options from under £10 for the sandwiches and savouries through to around £15 -£20 for the average main course.

I thoroughly enjoyed the evening, as much for the company and ambience as for the food which was classical stuff cooked to an above average standard.  Having got used to American style service, where the staff know every detail of the dishes on the menu, I was disconcerted when our waitress had to check the provenance of the beef.  But, as someone has pointed out to me, that’s why a standard US tip is 20% against the 12.5% that is the UK norm.  I’d pay the extra – would you?

With many thanks to the Beaumont Hotel and The Colony Grill Room for the invitation to join them for dinner.  There was no requirement to review, but I do think this charmingly retro yet stylish place fills a gap in London’s restaurant scene.