I love magic shows, from the incredible sleight-of-hand tricks of close-up magic artists to the large-scale illusionists such as David Copperfield who have become international superstars, there is nothing better for me than suspending my belief and slipping into that zone of wonderment that takes us back to being a child. I don’t want to know how the tricks are realised, I just want to sit back in awe and enjoy the magic. So when I was asked to review a new show called Wonderville at the Palace Theatre – it’s on Cambridge Circus off Shaftesbury Avenue where Les Mis was for years and then the Harry Potter show – I didn’t think twice.

Because of Covid related shenanigans, it has been put back twice but now I’m getting to see ‘the world’s greatest illusionists and mentalists … in a jaw-dropping display of magic, illusion and technological trickery that will electrify’. Frankly, I can’t wait, and the expectant audience that covers all ages also seem really excited.

The show kicks off with an excellent ensemble number showcasing the talents of the whole company. The highlight for me was seeing ‘Britain’s Got Talent’ star Josephine Lee’s half-sister…but I’m not going to give that one away! Sadly she was sidelined for the rest of the show with a dislocated knee but the rest of the acts more than made up for this. 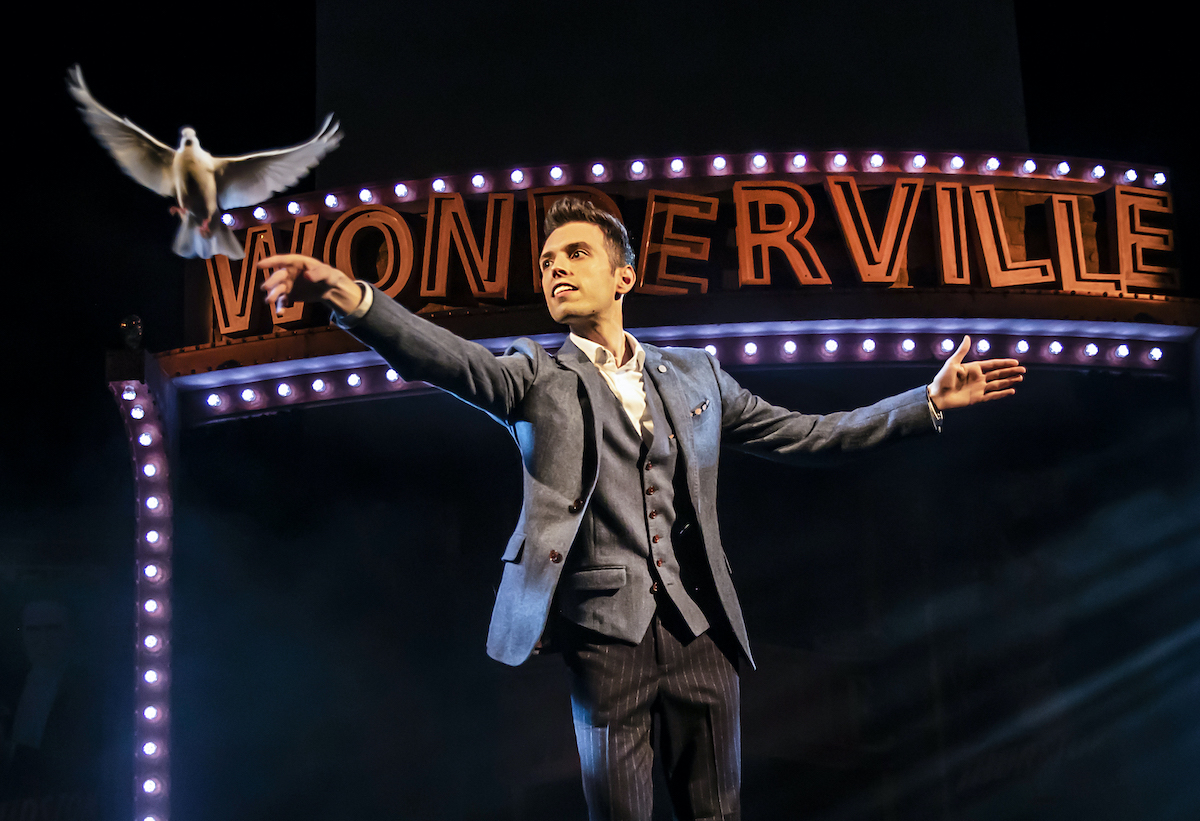 First up was Edward Hilsum, a classic close-up magic specialist. He was ‘the first magician to win all 3 Magic Circle competitions – and hold the titles at the same time. He achieved amazing transformations using doves, roses, candles and hankies which metamorphosed into other objects and then melted away from view. His second featured slot in the first half featured a charming 6-year-old child guest from the audience who became a magician for the night, charmed the audience and entertained with aplomb.

Wonderville is MCd by the effervescent Chris Cox, award-winning Mentalist star of (Ealing) Broadway and the West End. He comes on like a cross between Austin Powers and Chris Evans, full of geeky enthusiasm and energy. With his own audience ‘volunteer’ on stage, he delivered a dazzling comedic mind-reading act featuring an avocado and a variety of t-shirts.

Acclaimed by magic legends Penn & Teller, double act Young and Strange delivered a superlative comedy slapstick routine with the put-upon Young crawling into a cardboard box which Strange pierced with a terrifying sequence of sharpened sticks. But the biggest cheers of the first half were for special guest Kat Hudson from Hull. She’s a breakout star from Britain’s Got Talent ( she has 40m views on YouTube) and with her droll northern humour, she did amazing things with mobile phones and ended with an ingenious calculator skit.

Highlights of the 2nd half included Chris Cox’s virtuoso mind-reading act with lots of audience participation as he managed to uncover their darkest secrets to general hilarity and astonishment.

The 2nd special guest of the evening was ‘America’s Got Talent’ roller-skating sensation Emily England. Over lockdown, Emily has reinvented herself as a solo speciality act. Dressed in a fetching harlequin costume she began by giving the illusion of a neon tube floating around her. It was actually rather beautiful. She ended her segment with a combined contortionist and card magic act turn that was gently astonishing.

Young and Strange ended the show with a grand Las Vegas style finale – yes there was a showgirl bisected by a huge rotary saw – with a sequence of mind-boggling illusions with each being faster and more frenetic than the previous one.

All in all, it was great fun and a proper night out.

Wonderville has all the hallmarks of an old-fashioned variety show but updated for now. The press night audience loved it and there was a sense of liberation and joy in the air from both cast and audience to be back in the theatre. With a changing roster of special guests, the show will keep fresh and I can see people seeing it several times in its short run.

Tickets and info are on the Wonderville UK website

For magic on a different scale, do take a look at Simon Drake’s House of Magic