Brunch in the City:

Brunch comes in a number of forms and, as someone who seldom orders eggs from a menu, there are times when I pass on an invitation because of the egginess.  But, Coq d’Argent, the first of the  D&D rooftop restaurants in the City are, as usual, doing their brunch in style.  Instead of the normal prosecco, Coq d’Argent serve unlimited glasses of Moet et Chandon Champagne.  And, being a stylish kind of blogger, I decided an invitation to their inaugural Saturday Brunch was one I shouldn’t pass up.  Even if it did involve an egg or two.

I have only ever been to Coq D’Argent in summer – and I have to admit feeling a little despondent that it wouldn’t be nice enough to sit on the rooftop terrace.  But, the light and airy restaurant with pristine white linen and shiny silverware soon made me feel better.  The glass of Moet champagne on arrival helped a lot too!  Meanwhile, we were brought the menu to peruse and a tin of delicious bread which both of us tried and failed not to devour.

The Coq d’Argent brunch menu is one of those which is closer to a lunch menu than to breakfast.  Despite the plethora of eggy options there were plenty of dishes that worked for me – and in the end, I picked a starter WITH an egg, albeit a tiny fried quail egg.  It still counts!  The Tartare de Chevreuil is a delicious venison tartare on a celeriac and apple remoulade with a fried quail egg and a little caviar on top.  Simple, fresh and very light – the perfect way to start a brunch for me.

My companion’s eggs Benedict with jamon de Bayonne and a truffled Hollandaise looked nice but oh so eggy.  The yolk DID do that ‘insta-worthy-run’ – but as I was round the other side of the table I missed the shot. What a blogging fail!  Or perhaps an excuse to go back and try again?

You can essentially build your own Benedict – choosing toppings from smoked salmon, ham or mushrooms and finishing with a classic Hollandaise, a truffled one or one with nori.  So, if you ever fancied a bit of cheffy ingredient-matching Coq d’Argent offers you the chance to prove yourself.  I’d probably have picked my companion’s mixture had I wanted a poached egg.  But I can see a smoked salmon with nori or a truffled mushroom Benedict working well too.

A few more glasses of champagne later, our mains arrived.  For me, a classic fish and chips.  I generally spend Saturday mornings at the local Farmers’ market – and I always treat myself to fish and chips from one of the food stalls there.  It’s run by a Greek guy and has a great reputation locally for fish and chips or squid with sweet potato fries.  So, this one had to be THAT good.

Of course it was – and more.  The lightest of batters – more of a tempura than a classic beer batter and some ultra crisp chips, with a home made tartare and a portion of mushy peas which I left.

Meanwhile, my companion fancied a steak.  If I can revert back to the egginess of the menu for a moment, the steak comes with a fried egg, which she didn’t want after her eggs Benedict.   So the result was that her plate looks just a little bare with just a rosti as companion on the plate.  Although there are side dishes on offer by request, we were too engrossed in champagne and conversation to think of asking for some spinach or perhaps a salad…and if I can find any fault it would be that none were suggested.

She ordered her sirloin medium and found it just a little chewy, though cooked exactly as she had requested.  There’s a part of me wondering if perhaps it would have been better rare or medium rare.  My own route is always to ask for the chef’s recommendation as depending on whether a water bath is used or not will affect the cooking options.  And the chef usually knows the best level of cooking for each cut.  But perhaps the meat needed a little more aging?

There’s the sort of list of dessert options that make it hard to choose.  In the end, I picked the Tarte Tatin with Creme Fraiche (there’s an ice-cream option too) while my companion chose the creme brulee.

The Tarte Tatin was nicely caramelised and sticky, though the pastry could have been a little flakier.

The Creme Brulee came with bonus orange madeleines which added texture to the classic dessert.

The point of this brunch for me is that it’s the kind of way I’d like to spend a Saturday with friends.  The food, for the most part, is delicious and perfectly cooked.  But it’s straightforward food that allows you to talk, to be with friends focussing on the overall event rather than just the dishes on your plate.  And of course, the bottomless champagne helps more than a little bit with that too.

Food for friends – and champagne for companionship.  It’s nice to brunch without compromise and spend time with friends.  Coq d’Argent is a pretty good place to do that.

Le Brunch on Saturdays is £26.50 for 2 courses or £29.50 for 3 courses.  Unlimited Moet et Chandon Champagne can be added for £40 per person, or you can order from the regular drinks menu. 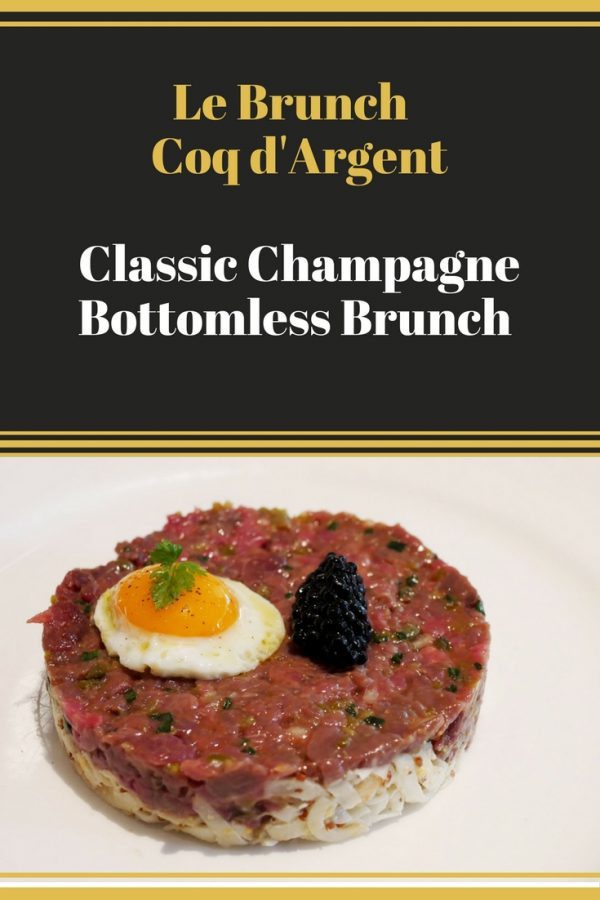