Looking for an organically different spirit? With Oxford Rye, look no further

Great tasting Oxford Rye (40% ABV) is one of a range of spirits produced by the award-winning Oxford Artisan Distillery.

Innovative and totally committed to the use of super-sustainable farming practices, Oxford Artisan is one of Britain’s very few ‘grain-to-glass’ distilleries (growing and distilling their own rye).  It is also unique – the only one to still work the ancient, heritage grains which used to be in use right up to the 20th century.

These are grown just for Oxford Artisan within 50 miles of Oxford and in accordance with their absolute commitment to ‘regenerative’ farming, avoiding all pesticides, fungicides and herbicides and employing gentler methods of cultivation.  For example, they use clover to suppress weeds and absorb carbon dioxide, and eschew the destructive effect of tilling on the soil. These methods work in harmony with the land, massively boosting biodiversity.

Their regenerative farming isn’t just about being eco-friendly, it actually contributes to the natural evolution of the grains so that each year the actual flavour of Oxford Rye is different. 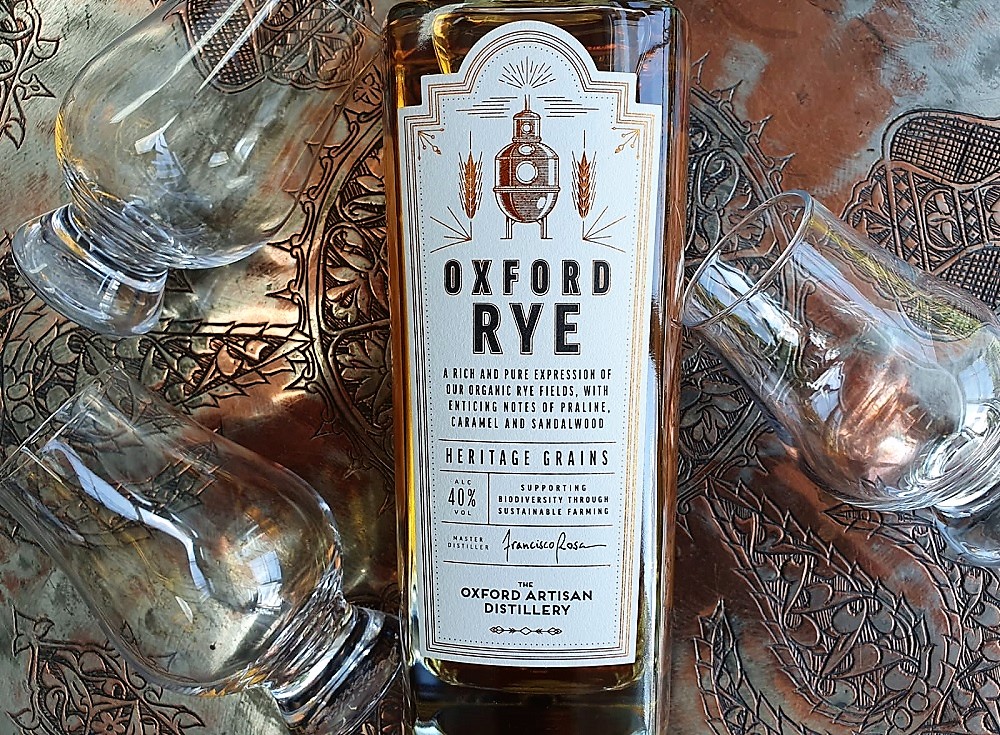 Not aged long enough to be called a whisky, the twice distilled spirit is rested for a few months in American Oak barrels to bring out its character. Described as ‘liquid rye’ – this delicate and golden spirit is a foretaste of the distillery’s rye whiskies – but it is a super drink in its own right, right here, right now.

Oxford Rye is packed with flavour: the aromas of exotic sandalwood and caramel are confirmed on the first tasting and are somewhat reminiscent of the Greek liqueur mastiha.

This then is really rather a distinctive drink, definitely something out of the ordinary, definitely one to remember.

Oxford Rye can be enjoyed as an aperitif or digestif; neat or with a splash of water; with or without ice; room temperature or chilled. Or, take a measure of Oxford Rye, add Fever Tree ginger ale, a splash of Angostura bitters and a squeeze of lime to make a perfectly refreshing Horsefeather Cocktail for that sunny summer evening.

In addition to Oxford Rye, Oxford Artisan produce award-winning organic vodka, organic gin and limited edition rye whisky. Employing all those natural farming methods, all their spirits have a well-deserved reputation for purity and taste which consistently helps them win plaudits from consumers and industry bodies alike.

If you’re down Oxford way and want to hear more about the Oxford Artisan Distillery’s ethos, then check out their 60 minute distillery tour for a behind-the-scenes-experience where you follow every step of the process from seed to still and into the bottle.

There’s also tasting of Oxford Artisan’s range of excellent craft spirits – all guaranteed to put a rye smile on your face….

The range is available from: The Oxford Artisan Distillery, Master of Malt and Amazon

A frequent business traveller, Nick has spent a lot of his evenings sitting alone in restaurants around Northern and Central Europe, the Baltic states and the Middle East so really enjoys the chance to write about them from time to time. When not away, Nick tries to keep a finger on the cultural pulse of London by going to concerts and the theatre or at least reading the reviews. As he seems to know some countries better than his own, he particularly enjoys exploring towns and cities in the UK when he gets the chance.