Italian Seduction in Clerkenwell at Luca.

One of the places we’ve been meaning to try for a while, we were delighted to hear Luca Restaurant has reopened its doors after lockdown. Luca opened in 2016 to mixed reviews. Its ‘Britalian’ aesthetic left some confused, nursing bruised wallets and their cherished copies of The Silver Spoon. However, the restaurant with its Milanese style Alexander Waterworth interiors soon established itself as one of London’s go-to rooms. 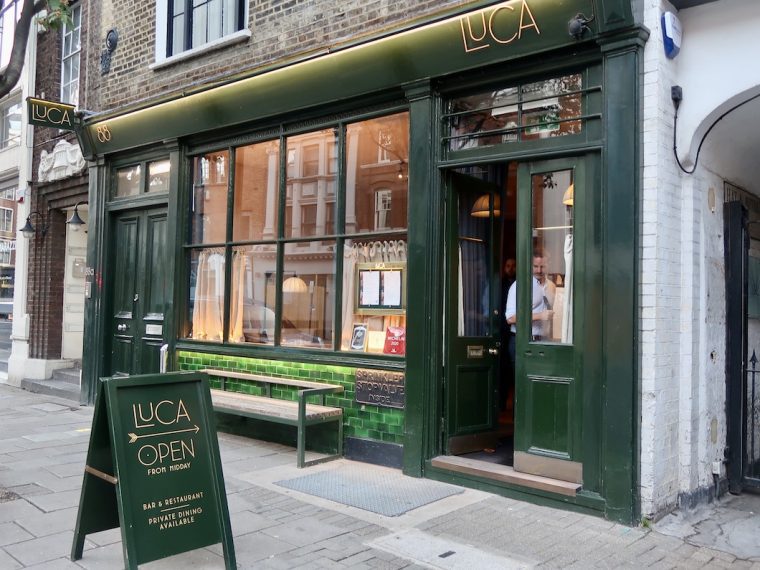 This didn’t happen by accident as Luca is the second offering from The Clove Club Group, a London-based operation including the Michelin-starred The Clove Club which has not yet reopened but is worth waiting for (see our review), Luca and Two Lights (see our review), a fun take on Modern American dining currently offering the kind of takeaway and delivery I’d order for a night in with my very best friends. With chef Isaac McHale leading the team, The Clove Club, which is ranked as the 27th best restaurant in the world, is a place for very serious gastro fun. These guys mean business. Which brings us back to Luca.

There’s a camp 1960s soundtrack playing as we enter into the handsome Italian Art-Deco inspired interior. We walk through the bar fitted with booths that wouldn’t look out of place in 1940s Little Italy to the chic sage green, terracotta colours and wooden floors of the restaurant.

The menu is annoying to a pedant like me as the proper names aren’t capitalised, but putting that aside it combines the British austerity of near Farringdon neighbour St John with an Italian seductiveness. Imagine Sophia Loren sitting on my knee…I mean Alec Guinness’ knee.

A plateful of tangy, chewy sourdough appeared with a golden-brown crust and a ceramic pot of green, peppery olive oil. Next up was Luca’s signature snack, Parmesan fries – they are like savoury churros, really light and airy, and coming hot from the fryer they are seductive and moreish.  We drank glasses of a complex Verdicchio Classico Superiore, Bucci, Marche 2018. It was herbal and honeyed with a long finish.

The menu is set up Italian style. From the antipasti menu we ordered a gorgeous salad of crisp Italian beans lubricated by the sweetness of grilled peaches, some sheep’s milk ricotta and given texture by intense slivers of confit almonds.

London has really upped its pasta game in the last few years. Mafaldine, the supple little ribboned pasta parcels were stuffed with a pistachio pesto and preserved lemon and enveloped with an intensely voluptuous buttery sauce and covered with Italian summer truffle shavings. Going back to the Ancient Romans the Italians really understand decadence and this plate was full-on Fellini…

Cornish plaice was perfectly cooked, served alongside a courgette flower plump with crab and pink shrimps, and sitting on a bed of green peppers. A little puddle of a roasted red pepper sauce added a welcome pungency. The other main dish was a succulent rare breed pork chop with earthy coco beans, mortadella and a salsa verde – it was a hefty savoury plateful.

Unlike some other places, Luca has maintained its high standards after reopening. It’s not a budget option but if sophisticated Italian dining with a British twist is your thing you won’t be disappointed.

Looking for something different?  We loved Six by Nico London, in Charlotte Street, Fitzrovia