Situated in the shadow of London’s Barbican Centre, The Jugged Hare is a pub-restaurant specialising in game meats. I have walked past countless times on my way to the theatre and exhibitions and always thought that it exuded a good atmosphere. Invited to review the restaurant during game season, I leapt like a hare at the chance. I brought along a fellow carnivore – an endangered species I sometimes think – as September is game season and we happen to love it.

Arriving a little early we had a chance to enjoy the pub area which is separate from the restaurant. Perched on red leather bar stools at a huge keg, we sipped tonic water while examining the taxidermy game birds displayed in glass cabinets behind the long wooden bar. They would not have looked out of place in the Natural History Museum. Two walls sported enormous stags’ heads. 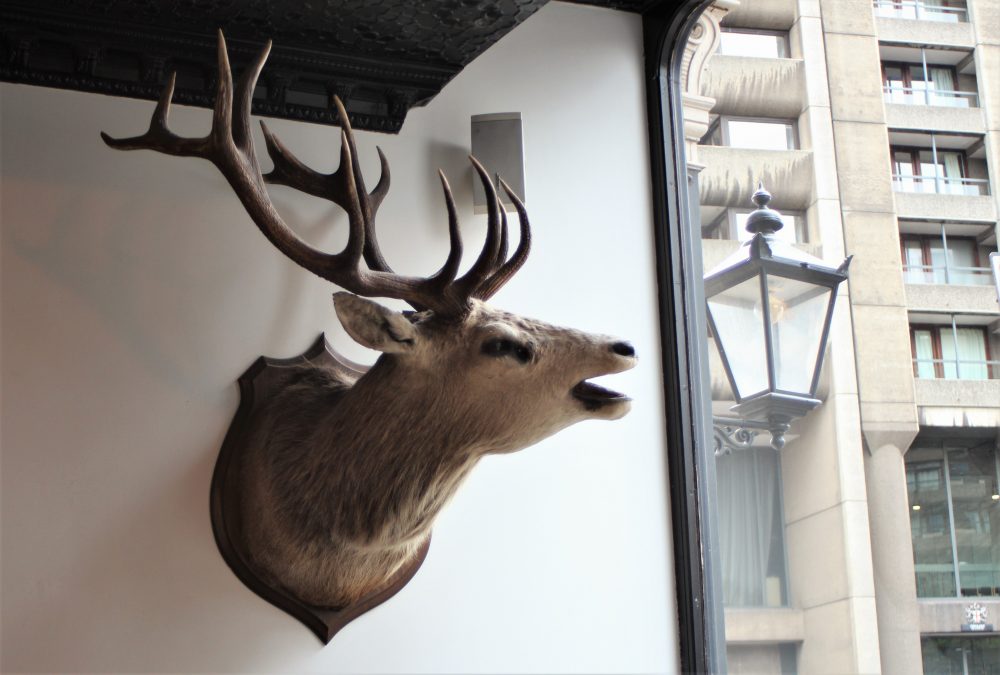 Entering the restaurant down a few steps, we found a convivial space packed for Sunday lunch, with more animals, this time hanging along some of the walls. These were lunch. Hare, grouse and other animals presented themselves to diners – there is no prettification here, no animal portions sanitised in plastic pouches that one finds in supermarkets. Here was the animal one came to eat. I think this is a good thing. If we are to eat meat, we need to come face to face with it.

The Jugged Hare takes its ethics seriously. Part of the ETM group of restaurants, it is affiliated to the British Game Alliance that has strict rules for the culling and shooting of game. While grouse season opens on 12 August, October to December is prime time for game birds. We were a couple of weeks early for a wider variety – up to 28 different birds are served during the full season – which includes plovers, pheasants, partridge, teal, grouse and many others. The restaurant serves what the suppliers have been able to shoot on any particular day. There is no shooting on a Sunday, so a smaller selection of game is available with a wider choice from midweek through Saturdays during the season. Venison is also served when available. The Jugged Hare operates all year round, of course, not only in game season. Throughout the year it champions British beef. In fact, the whole menu is sourced in Britain.

We put ourselves in the very capable hands of the manager, Rob, who was not only very welcoming and attentive but was top of the class in his knowledge of game and conservation. He suggested how we approach the menu to balance a light starter with the filling main courses and advised on a wine to pair with the robust flavours of the gamey meats. As we were driving we restricted ourselves to a glass each of an Australian Cabernet Sauvignon – Katnook, Coonawarra, 2014. The wine list leans towards French wines while including a smaller selection from Europe and the New World.

We looked around the room after placing our orders. The open kitchen sports a most impressive rotisserie where suckling pig and chickens cook to perfection. There are bar stools arranged along its length if one wants to get close to the action. Stainless steel shelves are filled with gorgeous copper pots, ceramic jugs – for the Jugged Hare – and well-used meat boards. The floors are wooden, the vaulted ceiling tiled in white, red leather banquettes line the walls. It is a most convivial space occupied by many 30-somethings out for a weekend treat as well as inter-generational families with babies, parents and grandparents. At 4 pm there were still people arriving – as tables emptied so they were refilled – so the atmosphere did not lag.

While there are a few veggie options this is not really the sort of venue a vegetarian would enjoy as the meat is literally hanging in plain view. For meat-eaters, it is a delight.

My companion began with a special of the day – Home-cured White Park bresaola. White Park cattle is a breed that goes back many hundreds of years. They are huge beasts with a distinct white coat and lean meat. The beef is aged for 45 days and cured for four months. This was a light dish and gently flavoured, thin slices of ruby coloured meat served with shaved Parmesan, salad leaves and a balsamic glaze.

I was thrilled with my starter – Hare Éclair. Who could resist such an offering? It was a savoury dish, very good looking and deeply flavoured. The éclair was filled with game liver parfait, tiny pipings of parsnip puree, and dotted with miniature capers. The éclair casing was decorated with a sweet game reduction. If it were not so rich, I might have ordered another. The intense liver flavour of the parfait, mixed with the sweeter parsnip puree and game sauce, and tiny salty pops of caper was gorgeous. 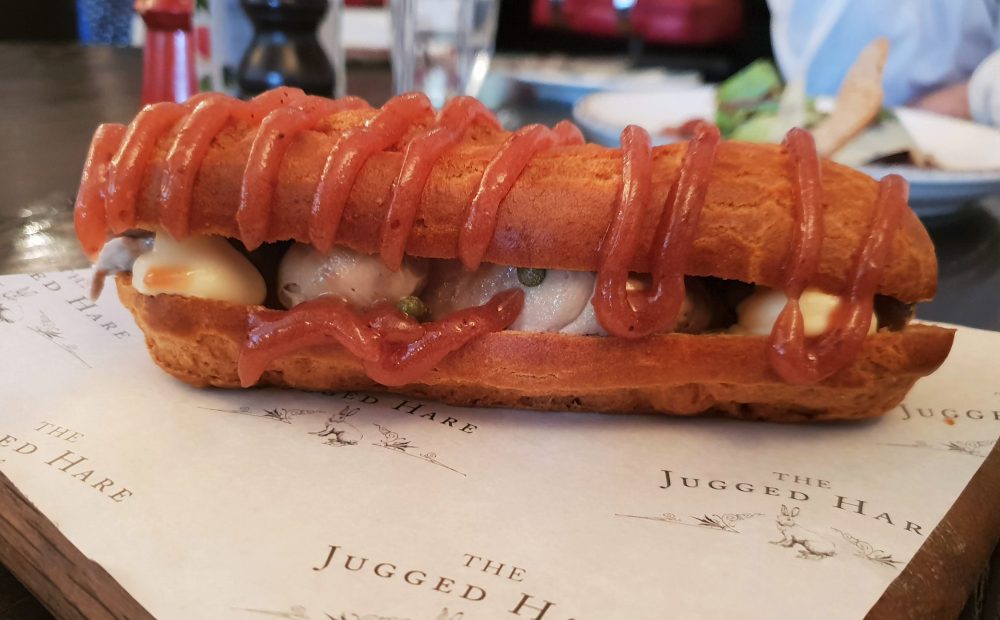 It was suggested that this dish is a gentle introduction to those new to the flavours of game meats. What a marvellous introduction. I needed no introduction as I have a long-term love of game,  the more pungent the better. So the main courses had me literally licking the serving spoons clean.

My companion and I shared the mains – jugged hare and roasted grouse. The dish after which the restaurant is named has a long history. The recipe is included in a cookbook dated from the 1800s written by Hannah Glasse. Jugging is a process of slow cooking marinated meat or fish which is placed in a ceramic jug standing in a bain-marie. The hare’s blood is added to the dish near the end of cooking to add flavour. 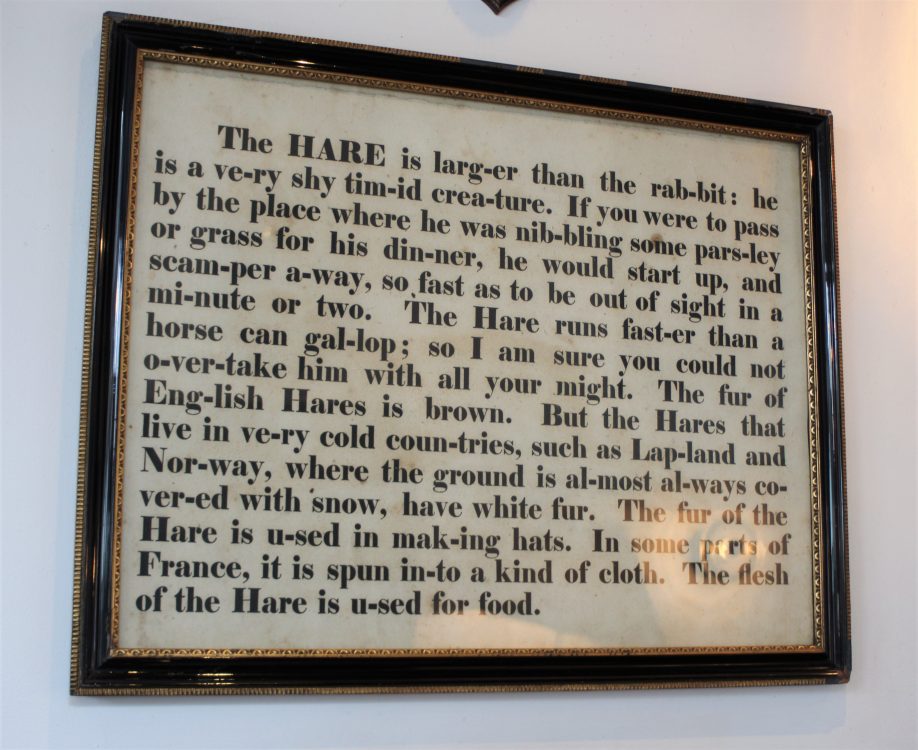 The Jugged Hare’s website provides the recipe for those who are interested and once I read it I was happy to hand over to the professionals. The chef marinates the hare in red wine, star anise, cinnamon, nutmeg and thyme. It is cooked with a mirepoix (finely diced celery, onions and carrots) along with small cubes of celeriac and field mushrooms which brings down the pungency a notch, preferred by local palates.

This was a memorable dish for which I hope to return. It was served in a tall ceramic jug with a long spoon protruding. Putting my nose into the jug I was met with a pungent aroma, beloved of game eaters. I spooned some meat (it was a large portion) into an accompanying bowl along with the smoothest mashed potato and a serving of savoy cabbage with bacon. The hare was deeply earthy and very tender. It had a depth of flavour that was visceral, no doubt due to the blood. No this is not a vampire dish, the hare’s blood has to be filtered and treated to make it fit for human consumption.

The roasted grouse was served on a board with its traditional accompaniments – game chips, bread sauce and red wine gravy in tiny copper pans, watercress and a serving of Savoy cabbage with bacon. It looked enticing and once cut into, revealed a very pink interior. It was succulent, sliced with ease and was beautifully tender. A perfectly cooked bird with flavour deluxe.

This was a meal of ethically sourced ingredients, expertly cooked and well presented. It was deeply satisfying. I regularly consider giving up meat for planet-saving reasons, but after this meal, I think I will delay the decision another while. In fact, game birds and animals need to be culled and The Jugged Hare takes its responsibility to the environment seriously.

We really did not need dessert, but we pressed on. It would be hard for any dish to stand up to what we had just eaten, to be honest. The special of the day, cheesecake souffle with damson jam (from the restaurant owner’s tree) was served in a Kilner jar. There were slices of light cake which did not quite add up to what I expected of a souffle and the jam was overly sweet for my taste.

More interesting was the pistachio rice pudding with stewed apricots which was creamy and deliciously spiced and served with plump fruit.

We ended the meal with a double espresso and fresh mint tea served in a sunflower yellow teapot.

The Jugged Hare makes a great pre-theatre venue if one is going to the Barbican but even better, go for lunch or dinner when you can linger over a memorable meal and a good wine. Not only is the meat top-notch, but the service is also excellent and the atmosphere upbeat. When I reached the end of the meal, I wanted to start all over again. Highly recommended.

Madeleine is a freelance journalist and writer for print and digital media. She focuses mainly on food and travel but with a lifelong love of the arts – especially visual arts, theatre and literature – she enjoys writing reviews for London Unattached. Madeleine has lived half her life in South Africa and the other in London which has widened her experiences of multiple cultures, languages and cuisines. Having grown up in a time when travel was restricted to local holidays, she has spent her adult life fulfilling a desire to see the world. She is a die-hard Francophile – speaking French helps tremendously – but put her anywhere and she is happy. Long haul destinations on the bucket list include China and Japan.