It seems that ‘Old Soho’ is having something of a resurgence at the moment.  Have the foodies of London finally tired of queuing for burgers?  I have a feeling that trends in the restaurant world follow trends in fashion – and both are influenced by the state of the economy.  Skirt lengths are supposed to rise as we get more of an economic ‘feel good’ factor.  I wonder whether perhaps our taste in eating out also changes – from no-booking, informal dining to something just a little bit more refined?  Somewhere just like l’Escargot restaurant  – a Soho classic.

The last time I was at L’Escargot was right in the height of the economic boom of the late 1980s, the Thatcher era.  I went for a friend’s birthday – it was, and still is, an iconic venue for bourgeois French food.  It was popular with the rich and famous including Lady Diana Princess of Wales, Judy Dench and Mick Jagger – photos of some of the famous guests line the corridors as you walk in.  While I think we were a little too busy celebrating for me to remember what we ate, I certainly have fond memories. I was thrilled to hear that it had been taken over by Laurence Isaacson, my boss’s boss’s boss when I first worked in London at Kennedy Brookes and even more delighted to be invited to visit the club, upstairs at l’Escargot, launched by Isaacson and his business partner Brian Clivaz.

The Restaurant and Club have been refurbished in a way that manages to keep the traditional decor but give it just a hint of contemporary edge, along with a lot of comforts.  You don’t feel that you are walking into something ‘new’, rather that perhaps the decorator was in a couple of years ago.  And, the club rooms each have a very different feel so you can tuck yourself away in the cosy yet luxurious Salon Rouge or enjoy the rather glitzier spacious Salon Noir, where there are weekly events.

We enjoyed a glass of champagne before sitting down to dine in the Salon Vert which really does have the feel of a French Bourgeois Dining Room. General Manager George Pell told us that the Head Chef, Oliver Lesnik, is working to create an updated menu which keeps the classic feel of l’Escargot restaurant, but introduces some lighter more contemporary options.

We started with a delicious crab salad with pickled cucumber.  I loved the fragrant lime combined with the crab, just a touch of Asian flavours introduced into this classic dish.

Salt beef and spring broth was pretty to look at, tender and delicious.  Salt beef can get a little stringy in the wrong hands but here served in a delicate broth with tiny turned vegetable garnish it was light, moist and flaky. 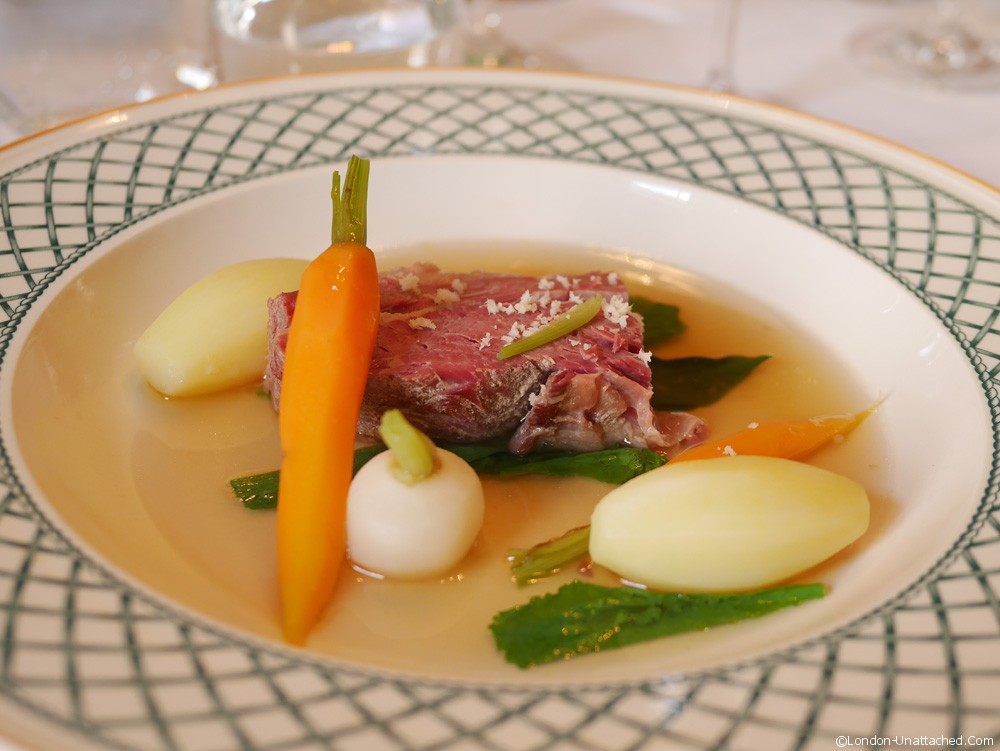 Tarte au citron is a classic and I’d expect nothing less than the refreshing dessert I was served.  Nice, crisp pastry could perhaps have been a little shorter but other than that a faultless dish for me.

I love this kind of place.  The food is excellent without being intrusive and the venue is comfortable and yet not casual to the point of sloppiness.  The Club at the moment is something of a bargain, with no joining fee and priced at £365 for a year’s membership.  It’s open from 8 am in the morning for breakfast and stays open till the early hours – 1 am, late enough for dinner and a nightcap post-theatre.

The restaurant downstairs is open to everyone with set menus at 17.50 for two courses and £21.50 for three and with mains at between £12 and £20. And, there’s a reasonably priced wine list.

So really, no-one has an excuse not to try one of London’s classics.