Marylebone Village Restaurants – Gastronomy in the Heart of the City.

Marylebone, like much of what is now London, really was a village.  Originally called Maryburne, after the stream that runs alongside St Mary’s church, it was surrounded by fields until the mid 18th Century.  Today it’s officially part of the City of Westminster, an area in the West End of London that runs from Oxford Street to Marylebone road and from Edgeware Road to Great Portland Street.  It’s a chic part of London, with Bond Street tube station to the South and Regent’s Park to the North and the mixed residential, shops and offices of the area are almost all high quality.  Harley Street, home to the consulting rooms of many of the UK’s leading medical practitioners runs through Marylebone and you’ll also find the RIBA building, home to the Royal Institute of British Architects housed in a stunning Art Deco building dating back to 1934.  Places to visit include the stunning Wallace Collection, one of the worlds finest private collections of art, which was bequeathed to the government in 1897 on condition that it should go on permanent public display with nothing added or removed!  Madame Tussauds sits in the North West corner of Marylebone and there’s also a small museum at the Royal Academy of Music, a collection of historical instruments.

Regent’s Park to the North of Marylebone Village was originally designed by John Nash though much of what was planned was never built.  There are, however, three of the original eight villas, a boating lake, bandstand and Open Air Theatre which is home to a series of summer productions.

In the heart of Marylebone village is Broadcasting House, an Art Deco building dating back to 1931 and designed to house the BBC.  Next door, the stunning John Nash church of All Souls Langham Place sits opposite the Langham Hotel, which was built between 1863 and 1865 and at the time was the largest and most modern hotel in London.  Today it’s a particularly fine place to enjoy afternoon tea in the elegant Palm Room or to sip on some of London’s finest cocktails in the Artisan Bar or in the Wigmore.

Marylebone still keeps its village feel and it’s part of London to enjoy eating and drinking.  There’s a real cafe culture here together with some fine artisan food shops including the Ginger Pig butchers and La Fromagerie cheese shop.  On Sunday’s it is also home to one of London’s best Farmers’ Markets – strictly regulated so that there’s a focus on local produce – they only sell foods grown in the UK and even goods like preserves must contain 50% or more locally sourced ingredients.  There are little clusters of restaurants in areas like Seymour Place, so if you are not sure where you’d like to dine, you can just go on a restaurant hop.  And, it’s one of London’s pleasantest areas to walk around at night.

Want to find out more?  check our reviews of tried and tested Marylebone restaurants – we’ll be adding more to the list and updating the reviews on an ongoing basis.

A newly refurbished gastropub in the heart of Marylebone with excellent food from Mark Jarvis and wine pairings by Xavier Rousset.

With the kitchen in the hands of Italian chef, Michelin trained Eduardo Tuccillo there’s a good chance things will work out well.  With 2AA rosette stars, you are assured of a certain quality of food, but my own experience goes well beyond that rating. Excellent and innovative dishes in an informal and friendly setting

Charming and authentic Vietnamese food in a cafe-style setting just around the corner from Marylebone station. Ultra friendly service and very reasonable pricing makes this somewhere not to miss

An Amalfi inspired menu from the team who brought you Chotto Matte, Fucina offers a range of dishes in casual fine dining style.

The Royal Oak - a Gastropub Gem in Marylebone

A delightful gastropub that hasn't lost any of the trappings of traditional pub food - just improved it. With an excellent beer menu to complement the food and wine, this is somewhere you'll love if you miss authentic pubs but don't miss the cooking!

The Wigmore - A British Tavern Revival 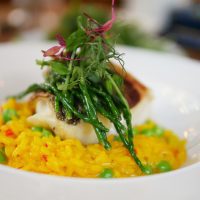 Roux at The Landau - Sunday Brunch

For now, we’ve also left out some of our favourite places simply because we haven’t been for a few years.  Some of them have changed ownership and although we’ve heard good things about The Harcourt and 28-50 for example, we will check them out before adding them into the review.  Others, like Zoilo, Roti Chai, Casa Malevo, the Cavendish and even Roganic are places we reviewed over five years ago so once again we need to go back before we can hand on heart recommend them!

Pin this post for later – we’ll be updating it with any new Marylebone restaurant reviews we think you should know about.