How to make a Yorkshireman happy – Roast Beef with all the trimmings at The Clarence:

Pure serendipity provided a request to review the Tin Belly Dining Room at the Clarence coinciding with meeting an old friend who just happened to have worked a stone’s throw from the pub for the last thirty years. The newly refurbished dining room specialised in gueridon service – the ‘Tin Belly Carving Trolley’ a pristine, shiny serving dish perched on a trolley. The lid of the trolley opened to reveal the largest ‘on the bone sirloin of beef I’ve seen, with a side dish of Yorkshire pudding and jugs of gravy.

Now, that all looked very tempting. Our waitress happily told us the Roast Beef was ‘really healthy too – meat that was fed on grass and fully organic, from somewhere in the West Country’. Normally I’d have jumped at the chance. But, gentle reader, there can be too much of a good thing and since I’d been working my way through the leftovers of Welsh Roast Beef that I’d cooked at the weekend, the idea of more beef really didn’t quite work for me.

Happily my friend was pleased to have the chance to indulge.

Ahead of the main course, we ordered a sharing platter of seasonal crudites with white bean and goats cheese dips and sat happily nibbling on stuff that really should have been diet friendly. Mine, washed down with a glass of Camel Valley Pinot Noir Sparkling Rose at £8.50 for a glass while my friend drank Doom Bar Bitter. Although downstairs is very much a pub still, the dining room menu has a nicely formed wine list with no beer. Fear not, the staff will happily pop down and bring you up a pint of whatever you fancy if a glass of wine isn’t your thing.

Once the mains arrived I had more than a tinge of regret. My ‘special’ of pheasant breast, sausage and white bean casserole was delicious and comforting on a cold winter’s day.

But, it just didn’t have the wow factor of the roast beef with all the trimmings on the plate opposite me. My Yorkshire friend was unhesitating in his praise. The beef, apparently, couldn’t have been any better. Certainly the meat looked wonderfully tender and was suitably pink in the middle. Apart from the largest Yorkshire pudding I’ve seen on an individual plate, he also enjoyed some crispy dripping roast potatoes and a portion of nicely cooked greens. Oh, and some homemade horseradish, which was singled out for praise. 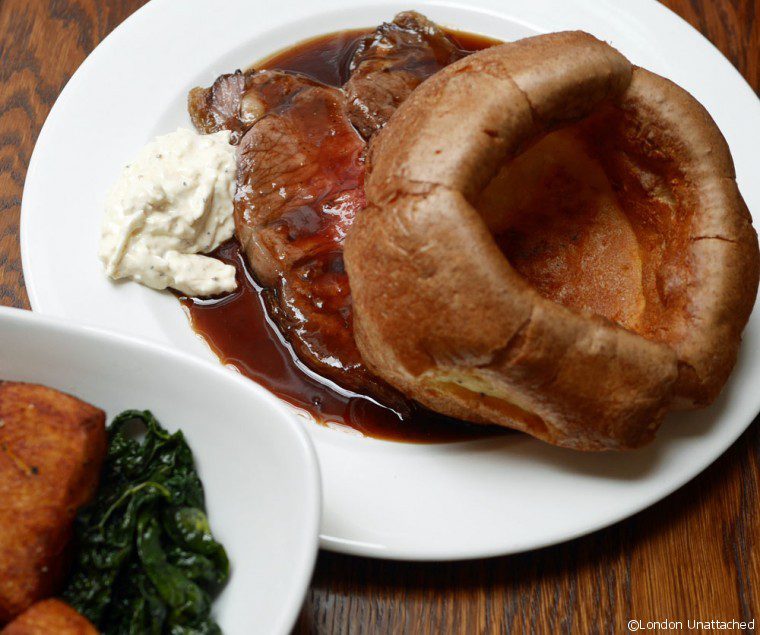 Neither of us really needed dessert. But in the interest of research, we decided to share the Victora plum and apple crumble with vanilla ice cream, a dish which could so easily have come from my own grandma’s kitchen.

The dining room was busy though there was plenty of space elsewhere in the Clarence. A mixture of tourists and people who appeared to work locally (I’d be there at least once a week if I did). I was impressed. ‘Gastropubs’ tend to polarise. Some appear to believe that gastronomy can’t possibly include British food. You know the sort I mean – the menu will include Thai green curry, paella and at least one pasta dish. At the other end of the spectrum, think dishes that really should have died a painful death in the 70s. That roast beef you know has been warmed up in the microwave, garlic mushrooms that look as if they might just have come from the wholesale version of Iceland and limp battered cod with flaccid chunky chips. Yes – British food, but closer to a culinary nightmare than the stuff dreams are made of.

Do the same kind of dishes well and you get something like the food at the Tin Belly Dining Room. But, to cook good British food takes careful cooking and excellent sourcing. Given the number of tourists in the dining room, I felt more than a touch of pride. To find somewhere serving good, honest British food at reasonable prices SO close to the tourist trap that is Trafalgar Square is remarkable. I hope the Clarence gets onto Trip Advisor’s ‘must visit’ lists. And I hope I find an excuse to go back to sample that beef for myself.