For years I’ve made Chicken in Red Wine, Coq au Vin, using the recipe Elizabeth David called Coq au Vin de Bourgogne and the second of her two recommended methods.  I generally drink French wine with it though not necessarily the Burgundy which she says the dish obviously demands. I have to confess, the wine I use in the recipe might just be a mixture of bottles that are left over from a previous dinner.  I’ve never seen a cockerel for sale in an English butcher – so I use her recommended alternative of roasting chicken.  I’ve even been known to make coq au vin with a mix of chicken thighs and wings, though I don’t think pre-jointed chicken ever works quite as well in this type of chicken in red wine recipe.  I’ve also experimented with Nigel Slater’s coq au vin recipe, which is just a little easier.

Generally, I do joint my own chicken in a slightly haphazard way, simply because it’s the cheapest way I know to get 8 or 10 pieces of meat (enough for 6 people) and a bit of carcass for stock.  For 10 pieces, you remove the wings first and tidy them up by trimming the tips.  Then remove the legs and joint into thigh and drumstick.  Then, cut the carcass away from the breast and bone to make a crown.  Cut two breast portions on the bone and split each one in half.  That makes 10 pieces of chicken all about the same size and all with a good amount of bone which is perfect for this chicken in red wine casserole.  I use this method to joint chicken for all sorts of recipes, sometimes leaving the breasts intact, sometimes making a crown to roast (perfect for two people).

Chicken in red wine is a rich and deliciously warming dish for Autumn through Winter – and whether or not you follow a classic Coq au Vin method or make up your own version, it’s a great flavour combination. A classic Coq au Vin recipe will include baby onions or shallots (the round sort, not the larger banana shallots), button mushrooms and lardons of smoked bacon.  Elizabeth uses three-quarters of a bottle of wine with her recipe together with a glass of brandy. The resulting dish is one I’d serve to family or friends but perhaps not at a more formal dinner party. Nigel uses a bottle of wine but unlike this recipe, there’s no marinating and no reducing down of the wine. 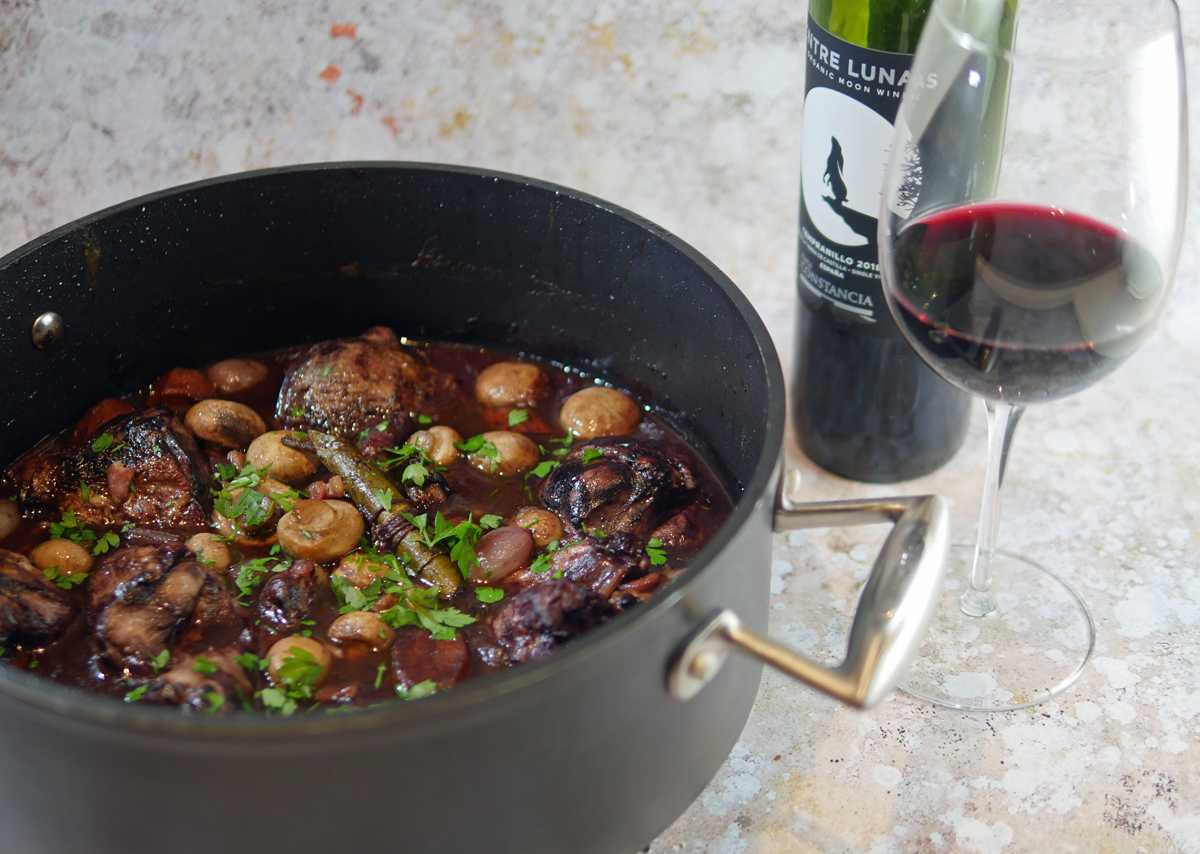 This time, perhaps because I wasn’t planning on drinking my Coq au Vine with a bottle of burgundy and was using leftover Portuguese and Spanish wines as the base, I looked elsewhere for a good Chicken in Red Wine recipe.  I wanted real depth of flavour and to see whether marinating the chicken added anything to the end result. I ended up adapting a recipe from Raymond Blanc, ironically a chef who does produce amazing classic French dishes.  The adjustments I made were cosmetic, simply to allow me to enjoy the meal with friends.  The classic Raymond Blanc version of coq au vin needs someone in the kitchen while the dish is prepared and I wanted to make it up so that the final preparation would take no more than 5 minutes.

Pairing food and wine is something where I believe you can get a huge improvement in a meal relatively easily.  The perfect pairings that a top sommelier can achieve are something different, but finding a red wine that will work with a hearty chicken casserole where there’s red wine in the base sauce is a matter of finding something suitably robust but not overwhelming.  It stands to reason that red wine will pair best.  I’ve been enjoying Entre Lunas, a Spanish organic and biodynamic Tempranillo from Finca Constancia, which is lightly oaked to create a mellow red wine that has all the notes of fruit and leather you might expect from a good Pinot Noir in a more robust wine. I misplaced the original bottle I was sent to taste and ordered myself a second bottle from Sainsbury’s where it retails for around £10.  Then I found the first bottle.  So, I opened it and tried it the night before our dinner.  Now, I do have plenty of French wine here, but once I’d started to make the chicken in red wine I realised the sauce was going to be rich and fruity.  And, I thought the Entre Lunas would make an excellent pairing.

Here’s the recipe for coq au vin or chicken in red wine, which is based pretty closely on Raymond Blanc’s version.  It’s definitely one I will be making again – I found that marinating the meat resulted in chicken that was not in the least bit dry (one of the challenges of the classic dish) and the slightly tweaked method made for a dish that I could prepare in advance so that I could enjoy my evening with friends.

I served this with a side salad and simple boiled potatoes.  There were just enough leftovers for supper the next day and I was surprised at how well it reheated.  I did stir the potatoes into the sauce this time and reheated the whole thing gently in the oven.  The chicken had stayed nicely moist and tender, though the sauce had lost a little of its velvety texture.

In his original recipe, Raymond Blanc suggests straining the sauce and then reducing it down before returning it to the casserole to serve.  But, that’s one step too far for me – I was happy enough with my simple version – and by toasting the flour the sauce didn’t have any of that wallpaper taste you sometimes get if you stir through flour to thicken a sauce.  An alternative might have been to make a beurre manié, but that would have added extra fat into the dish.

Entre Lunas wine turned out to be an inspired pairing that worked very well with the dish as a whole.  It’s a rich fruity wine with the same leathery and vanilla notes you’ll get from a good Burgundy Pinot Noir. It would pair well with red meat or game too, though I wouldn’t serve it with anything that has a light sauce.  An excellent autumnal mouthful that I’ll be buying more of.